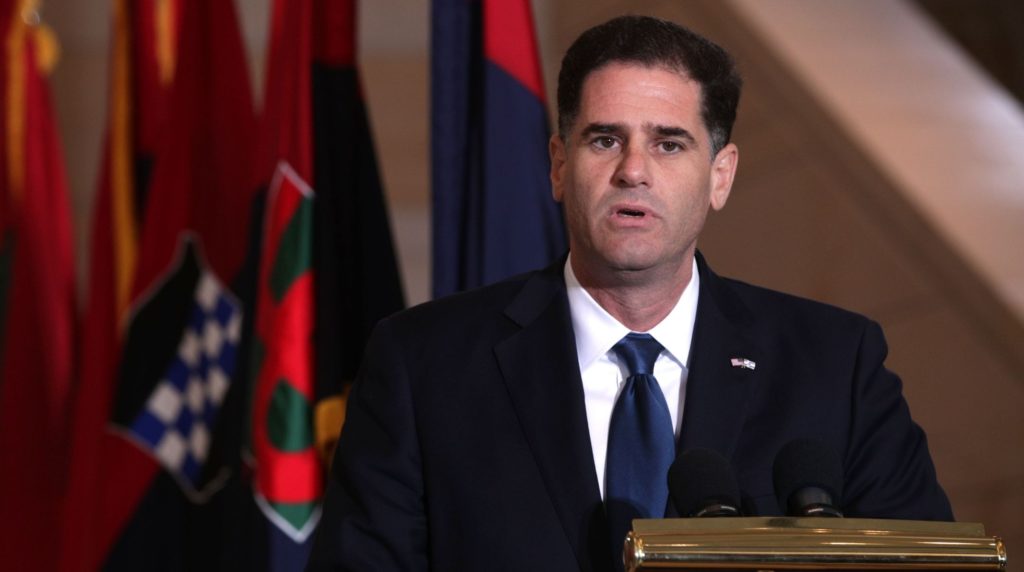 WASHINGTON (JTA) — An off-the-record speech by Israel’s ambassador to Washington noting gaps in support for Israel between Republicans and Democrats drew rebukes from the liberal wing of the pro-Israel community, accusing Ron Dermer of politicizing support for Israel.

“There has been, for 40 years, a gap between Republicans and Democrats in their support for Israel,” one tweet said. “He notes that this predates, by decades, Trump, Netanyahu, Obama and any other reason that Democrats would cite.”

Democrats have been more pronounced in recent years in their criticisms of Israeli Prime Minister Benjamin Netanyahu, arising in part from his tensions with President Barack Obama and his closeness to President Donald Trump. A nadir was Netanyahu’s speech to Congress in 2015 opposing Obama’s Iran policy, which Dermer helped organize without consulting Democrats.

In another tweet, Dermer said that “a big reason for this has been the enormous rise in support for Israel among Republicans. However, there is a rise in the American left-wing of anti-Israel sentiment. These are the same people that don’t believe America is a force for good …”

A source present in the room said RJC was filtering an unexceptional speech through a partisan filter. Dermer’s speech, the source said, was no different than remarks he delivered earlier this month at the American Jewish Committee.

At the AJC, Dermer emphasized that Democratic support for Israel has remained steady while Republican support has skyrocketed.

Dermer, speaking at the AJC, suggested that blame in part lay with Israel and pro-Israel messaging to progressives.

“I think Israel is the only source for progressive values in the Middle East,” he said. “What Israel has to do is to continue to engage, continue to reach out.”

Dermer at the American Jewish Committee and Republican Jewish Coalition cited Gallup polling since the late 1980s that shows support for Israel among Democratic voters hovering steadily between the low 40s and the high 50s in percentages, while GOP voters have spiked from the same range in the late 1980s and now run from the upper 70s to the upper 80s.

The RJC soon deleted the tweets, but a number of liberal Jewish groups had already reacted, or subsequently reacted when the Jewish Telegraphic Agency posted a summary of the tweets.

“Politicizing U.S. support of Israel is not in the interest of either country, and this statement is patently untrue,” Halie Soifer, the director of the Jewish Democratic Council of America, said on Twitter. “Dems remain strongly supportive of the U.S.-Israel relationship.”

The embassy did not respond to a request for comment, although Dermer on Friday posted to Twitter the excerpt from his AJC appearance.

On Bipartisan support for Israel

Soifer also pointedly posted quotes from a speech that Dermer had made when the Jewish Democratic Council launched in 2017, including “there is very strong support for Israel in the Democratic Party” and “you cannot fly a plane with one wing.” For added measure, she posted a photo of Dermer addressing the group.

Michael Koplow, the policy director for the Israel Policy Forum, which backs a two-state solution, said there had indeed been a gap, but cited a Pew Research Center analysis to show that it had been exacerbated by Netanyahu’s relationships with Obama and Trump.

“Ambassador Dermer is correct that there has been a partisan gap on Israel for decades,” Koplow said.

“But until the particularly incendiary combo of Obama and Netanyahu and the even more incendiary combo of Trump and Netanyahu, it was a gap of only a few points,” he said. “So he is technically correct, but any implication that the gap was significant until about a decade ago is wrong, and it’s important to understand why the gap has split open rather than pretend that Democrats are distrustful of Israel by nature.”

Also taking Dermer to task were J Street and Americans for Peace Now.

“It’s a testament to Democrats’ genuine affection for Israel and its people that — despite such repeated disrespect by @AmbDermer & @IsraeliPM — the vast majority of the party continues to adhere to the formerly bipartisan consensus positions on Israel that the GOP has now abandoned,” said Dylan Williams, the senior vice president for government at J Street.

One of Dermer’s defenders said he had merely pointed out a contrast between the two parties.

“Americans who support Israel and see what a disaster the Dems have become on the issue need to openly call it out — do what Israel wants and needs us to do: impose a political price on the Democrats for their betrayal of an ally,” tweeted Jeff Ballabon, a Republican strategist who founded Jexodus, an organization trying to peel Jews away from Democrats.