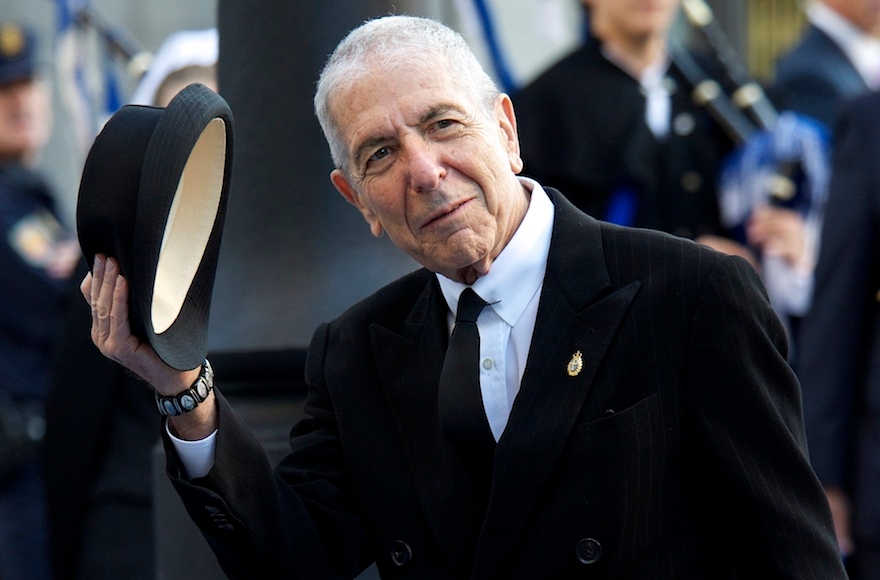 (JTA) — Leonard Cohen may have died in 2016, but the modern-day Jewish psalmist is still giving us gifts from the grave.

Take for example this poem he wrote in 2015, published for the first time this month, called “Kanye West Is Not Picasso.”

“Kanye West Is Not Picasso” by Leonard Cohen, from Cohen’s new book ‘The Flame.’ pic.twitter.com/w5lUfkjdYv

(I’m tempted to stop writing this article here because anything I write about this poem will pale in comparison to the poem itself which, I can say from personal experience, only gets better after three readings. But here goes.)

The poem skewers Kanye and Jay-Z for comparing themselves to historical icons. Among the many, many headline-driving things he has said, Kanye West has indeed compared himself to Pablo Picasso (in a bizarre 2015 speech and a 2016 album titled “The Life of Pablo”) and Thomas Edison (also Nelson Mandela and Steve Jobs).

Jay-Z in his 2013 song “Open Letter” calls himself “the Bob Dylan of rap music.”

(Cohen is referring to Nikola Tesla, the turn-of-the-20th-century inventor who pioneered ways of supplying electricity, not Elon Musk’s company. Later he refers to Tesla’s “coil,” which was one of the inventor’s innovations.)

Cohen then moves on to Jay-Z:

Cohen and Dylan were musical contemporaries and friends. One of my favorite Leonard Cohen stories, from David Remnick’s fantastic New Yorker profile of the late musician, involves Dylan driving Cohen around L.A. while they discuss their musical careers:

Dylan went on driving. After a while, he told Cohen that a famous songwriter of the day had told him, “O.K., Bob, you’re Number 1, but I’m Number 2.”

Cohen smiled. “Then Dylan says to me, ‘As far as I’m concerned, Leonard, you’re Number 1. I’m Number Zero.’ Meaning, as I understood it at the time — and I was not ready to dispute it — that his work was beyond measure and my work was pretty good.”

I don’t have any special insight into the rest of the poem, except that “I am the Kanye West Kanye West thinks he is/when he shoves your ass off the stage/I am the real Kanye West” is a great tercet.

Cohen ends the poem with a reference to war, a theme he returned to throughout his work. (“The Partisan,” one of my favorite Cohen songs, is about a French resistance fighter during World War II who has lost everything but keeps on fighting.)

“I only come alive after a war,” he writes in the poem’s final lines. “And we have not had it yet.”