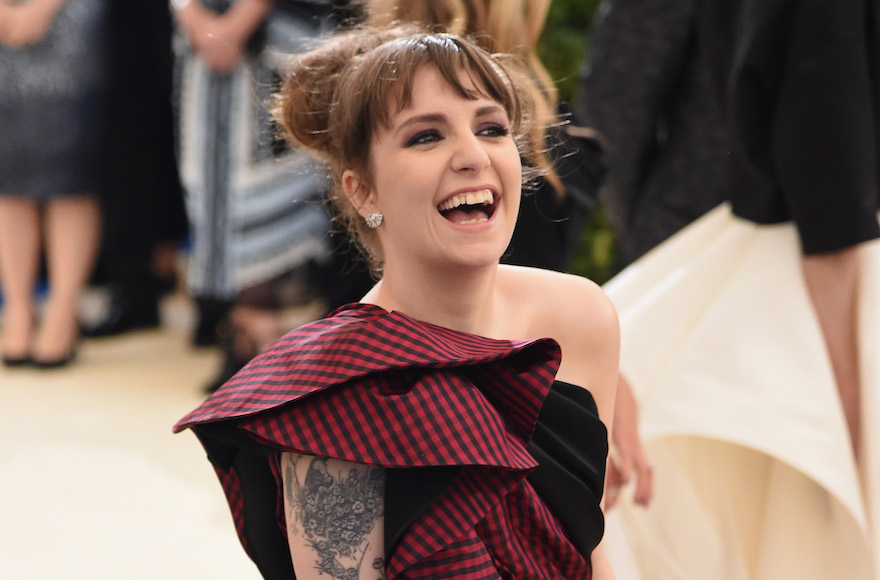 Lena Dunham at a gala at the Metropolitan Museum of Art in New York, May 1, 2017. (Nicholas Hunt/Getty Images for Huffington Post)

(JTA) — It has been a rough year for “Girls” creator Lena Dunham.

Since her acclaimed HBO show concluded in 2017, she has broken up with longtime boyfriend Jack Antonoff (who has become one of the most in-demand pop music producers in the industry) and parted ways with her creative partner and “Girls” co-writer Jenni Konner. In February, she wrote in Vogue about her struggles with endometriosis.

Dunham also was clearly affected by the Pittsburgh synagogue shooting on Saturday, which inspired her to share some comments on her Jewish identity.

I don’t talk about my Jewish faith a lot, but it’s a huge part of my life, family and heart. It is painful & tragic to see a place of prayer cleaved by bigotry & hate, yet again. Please return our shalom to us with prayers & active support of the Jewish member of your community.

However, she reportedly has a big project in the works.

According to Variety, she is adapting a book about a Syrian refugee surviving at sea for Steven Spielberg and J.J. Abrams, who are serving as co-producers. “A Hope More Powerful Than the Sea: One Refugee’s Incredible Story of Love, Loss and Survival” documents the story of Doaa Al Zamel, a mother of two who fled Egypt for Sweden and survived a shipwreck for days while clinging onto her children on an inflatable rubber ring.

Dunham is also set to star in Quentin Tarantino’s next film, a mystery that involves the Manson crime family.