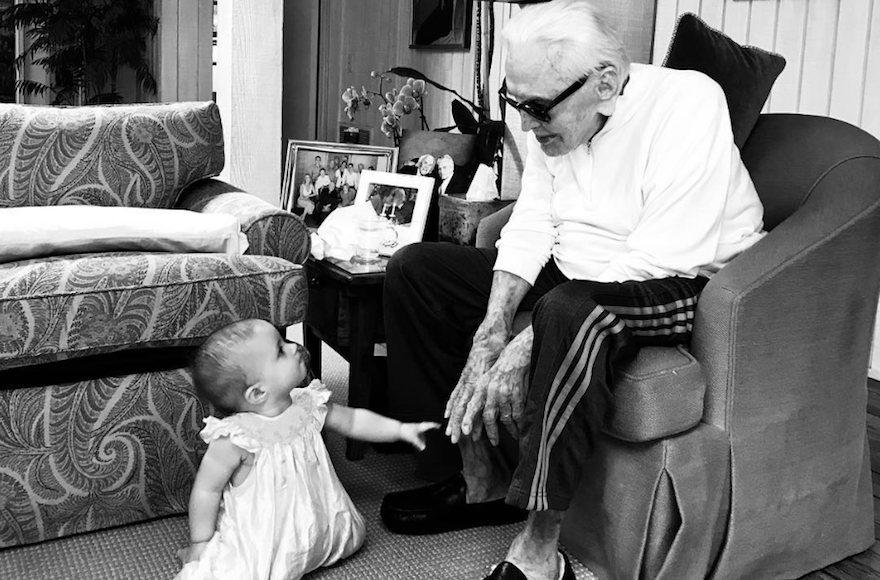 (JTA) — At 101, Kirk Douglas isn’t making many Hollywood headlines anymore. But if you want the occasional glimpse into his adorable family life, follow his grandson Cameron.

As People magazine pointed out, Cameron Douglas — son of Michael — posted a photo of Kirk with his great-granddaughter on Instagram on Tuesday. Kirk’s great-granddaughter is named Lua Izzy, and according to People, that middle name is a tribute to Kirk’s birth name, Issur Danielovitch (he was born in New York to Jewish immigrant parents who spoke Yiddish at home). Kirk went by Izzy at one point in life.

This isn’t the first time Cameron has shared a picture of his grandfather.

Cameron Douglas acted in a few films over a decade ago, but he is perhaps best known for being arrested for drug possession multiple times. He has been out of prison since 2016, and had Lua Izzy with his girlfriend Vivian Thibes in December.

Michael Douglas has had a bit of a Jewish renaissance later in life. He won the Genesis Prize, or “Jewish Nobel,” in 2015, and his son Dylan, who is now 18, had a bar mitzvah in Jerusalem.

Kirk told People in January that he plans to have Lua Izzy call him and his wife Catherine Zeta-Jones “Bubba and Zeze” — which is either an alternative way to say bubbe and zaydie (the Yiddish words for grandfather and grandmother), or a miscommunication on Douglas’ or the reporter’s part.