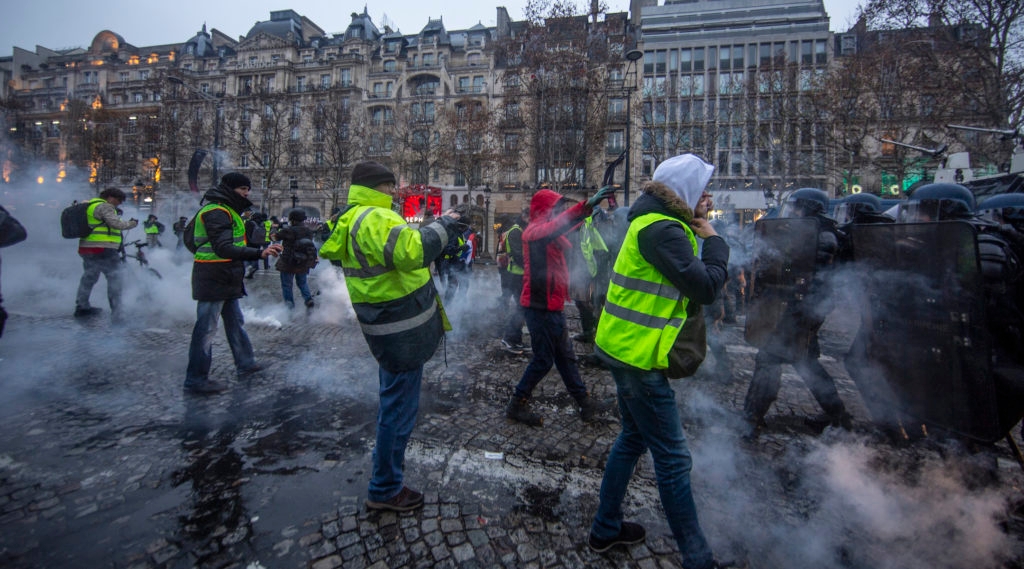 (JTA) — Tainted by numerous accusations of anti-Semitism, activists of the yellow vests movement in France enthusiastically embraced a supporter named Pascal Olivier Chiron, who wears a kippah to their protests.

A middle-aged man with short gray hair who says he is a Jewish-born convert to Catholicism, Chiron has filmed himself at protests in order to counter French media reports of anti-Semitism within the grassroots populist movement.

“International media have relayed this evidence that the government and the French media are lying, and that there is no racism or anti-Semitism among the Yellow Vests,” Chiron wrote Wednesday on Facebook after he was filmed attending a demonstration.

A day earlier he wrote “Baruch Hashem! [Hebrew for “God bless”] I wear a kippah and a yellow vests and it’s all good. I do not suffer any form of anti-Semitism. On the contrary!”

This appeared to be good news following the international shock last week after the French-Jewish philosopher Alain Finkielkraut, who has declared his support for their cause, was mobbed on the street by yellow vest protesters. Demonstrators shouted “Dirty Zionist” at Finkielkraut and told him to “go to Tel Aviv” as police officers escorted him to safety.

But the France Info radio station on Tuesday discovered a very different Chiron than the Jewish “anti-Zionist but not an anti-Semite” he purports to be: In fact, he is a propagator of Nazi anti-Semitic propaganda and an admirer of at least two convicted Holocaust deniers in France.

Another image he had shared showed a hook-nosed President Emmanuel Macron and another man resembling Nazi depictions of Jews cowering at the feet of a far taller man wearing a yellow vest. On Dec. 31, Chiron posted a picture of people wearing yellow vests alongside the comedian Dieudonne M’bala M’bala, a Holocaust denier and propagator of anti-Semitic hatred. The people in the photo are shown making the quenelle gesture, popularized by Dieudonne that resembles an inverted “Heil Hitler” salute.

Chiron is not the first person to offer his Jewish credentials in defense of a European movement tainted by charges of anti-Semitism.

In Britain, Tony Greenstein, a Jewish supporter of Labour leader Jeremy Corbyn, has often accused Zionists of colluding with Nazis and was kicked out of Labour for it. He recently filed a defamation suit against an anti-Semitism watchdog that had called Greenstein a “notorious anti-Semite.”

The lawsuit doesn’t seem to be going too well. Last week, the judge in a preliminary ruling wrote that the Campaign Against Antisemitism was merely expressing an opinion, not misstating a fact, when it called Greenstein an anti-Semite. Britain’s laws on defamation do not extend to the expression of opinions.

As for Greenstein, he describes himself as a “Jew who deplores and condemns anti-Semitism.”