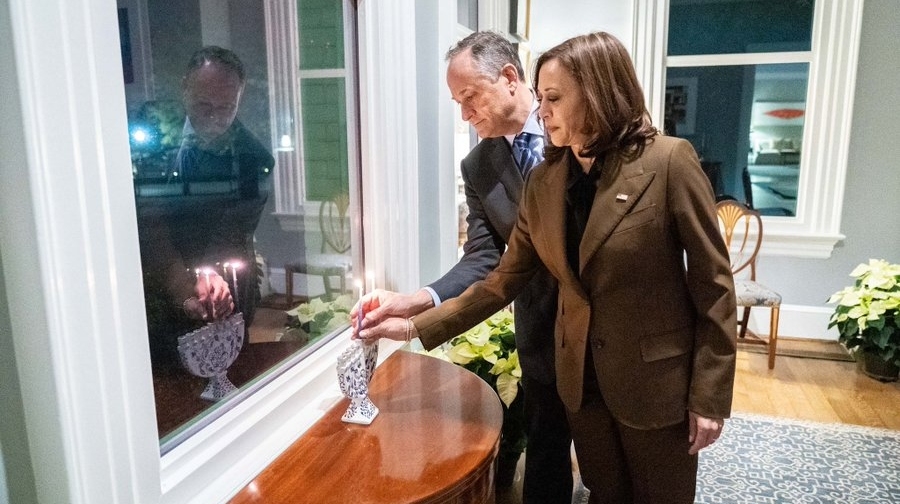 WASHINGTON (JTA) — The Biden administration is all about getting folks to work together to climb out of a COVID-stricken economy.

That might explain why the first menorah lit by a Jewish spouse to a vice president came from the home of a businessman revered for paying employees for months while he rebuilt a factory destroyed in a fire.

Yair Rosenberg, who blogs on Jewish issues at The Atlantic, tracked down the origins of the menorah in a photo that Douglas Emhoff, the Jewish husband to Vice President Kamala Harris, posted on social media the first night of Hanukkah.

Staffers for the Second Couple were considering which menorah to use — there’s always a story behind the candelabras featured at White House Hanukkah lightings. One came across the obituary of Aaron Feuerstein, who died on Nov. 4 at 95.

In December 1995, the company’s redbrick textile factory complex caught on fire, causing one of the largest blazes in Massachusetts history. Work for the factory’s 1,400 employees stopped, but Feuerstein kept paying them.

At the time, the Boston Globe quoted Feuerstein as saying, “I’m not throwing 3,000 people out of work two weeks before Christmas.” Feuerstein also explained after the fire that he was guided by Jewish tradition. “When all is moral chaos, this is the time for you to be a mensch,” he said.

Feuerstein’s mensch status was further cemented by the Second Couple’s decision to honor him by lighting his menorah this year.

Noticing the Emhoff post was Feuerstein’s granddaughter, Marika Shosh Feuerstein, which should come as no surprise: she had painted the menorah for her granddad.

“My grandfather is still shining bright, which means his values and Chesed live on,” she said on Facebook, using a Hebrew term for charity.