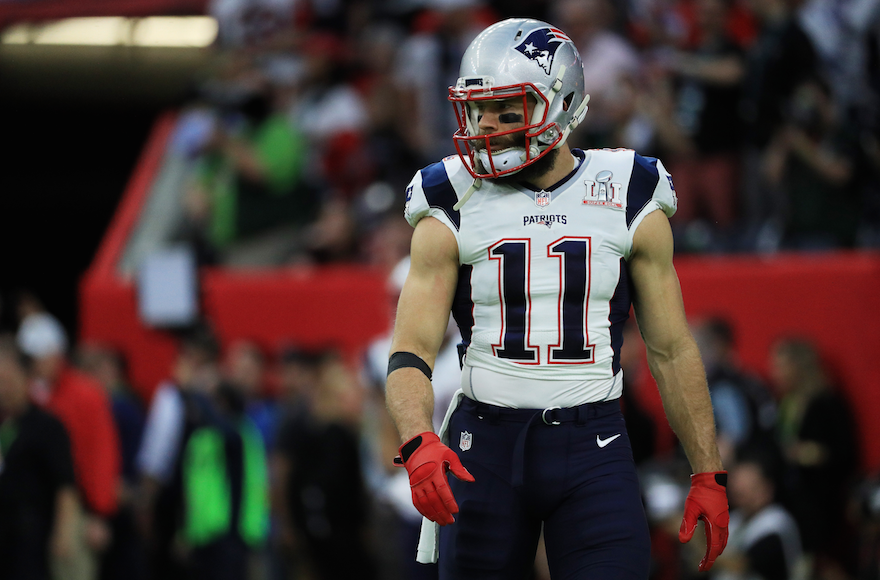 Edelman provided some of the rare offensive highlights in a torpid defensive game with a game-high 10 catches for 141 yards. Eight of those receptions led to first-downs, keeping the ball out of the hands of the Rams’ potent young quarterback, Jared Goff.

Edelman, 32, is one of only a few Jewish players in the league, embracing that side of his identity over time. He has a Jewish father but was not raised in the religion, and through the Patriots front office often would defer on questions about his religion.

His is the quintessential surprise story: Undersized at 5-10 and less than 200 pounds, without blazing speed and coming from Kent State — not exactly Alabama — Edelman was picked toward the end of the last round of the 2009 draft. He didn’t establish himself as a standout until the 2013 season. Coincidentally or not, it was during his breakout year that Edelman identified as Jewish in an interview with the NFL Network.

Since then, he has shown his Jewish pride on a number of occasions. In a 2014 game, for instance, he wore a pin featuring the Israeli flag. He has tweeted about Jewish holidays. He even went on a Birthright-style trip to Israel, and has written a children’s book that references modern-day Zionism founder Theodor Herzl. After the Pittsburgh synagogue shooting in the fall that killed 11, he wore special cleats with Hebrew on them to honor the victims.

Edelman has become renowned in large part because of his clutch performances in the playoffs. He has made a series of memorable catches, including one in the 2017 Super Bowl that ranks among the wildest in championship games. Edelman also has the second most postseason receptions of all time.

Edelman has three seasons of over 90 receptions and two seasons of more than 1,000 receiving yards.

Kraft is the latest recipient of the Genesis Prize, given to a Jewish leader or celebrity who serve “as an inspiration to the next generation of Jews through their outstanding professional achievement along with their commitment to Jewish values and the Jewish people.”