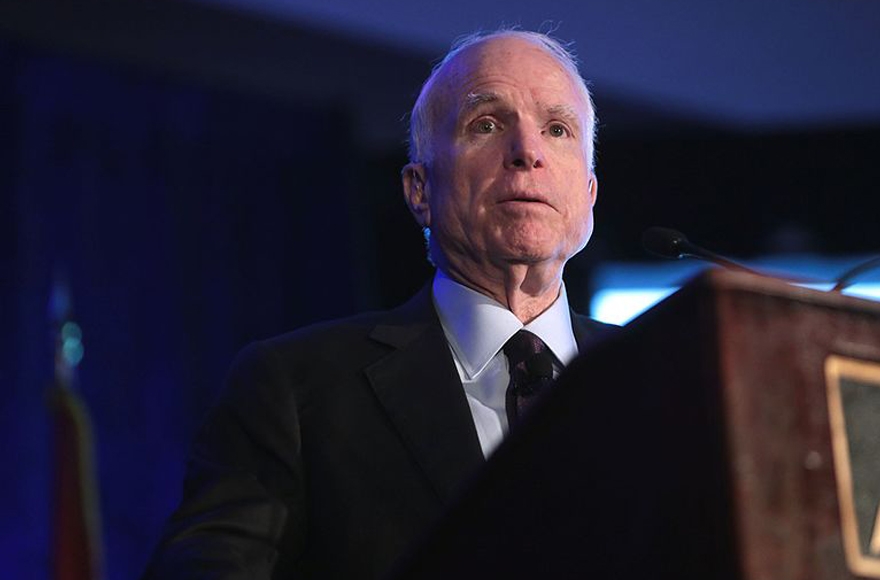 WASHINGTON (JTA) — John McCain’s farewell message was seven short paragraphs packed with the qualities that made the Arizona Republican stand out among his colleagues in the Senate: a paean to his family and to the state and country he loved, gratitude for the opportunity to serve in its military and in Congress, and acknowledgment of his flaws.

Make that five paragraphs: McCain reserved two paragraphs in his posthumous farewell for a warning about the dangers of hypernationalism, alluding to the rise of the “alt-right,” the white supremacists whom he reviled. And he invoked a slogan that predates the Nazis, but that was made popular by them: blood and soil.

“I lived and died a proud American,” said McCain, underscoring his warning with an eerie first person past tense use of the verb “die” perhaps only he could get away with. “We are citizens of the world’s greatest republic, a nation of ideals, not blood and soil.”

He cast his warning in the context of the robust American interventionism he has always favored.

“We have helped liberate more people from tyranny and poverty than ever before in history. We have acquired great wealth and power in the process,” McCain said. “We weaken our greatness when we confuse our patriotism with tribal rivalries that have sown resentment and hatred and violence in all the corners of the globe.”

It was not the first time McCain had referenced the term “blood and soil,” which the Nazis used to justify their theories of racial purity. Last October, receiving the National Constitution Center’s Liberty Medal, he used the term to warn against the white supremacism that had led to violence and murder in Charlottesville, Virginia just two months earlier.

“To fear the world we have organized and led for three-quarters of a century, to abandon the ideals we have advanced around the globe, to refuse the obligations of international leadership and our duty to remain ‘the last best hope of earth’ for the sake of some half-baked, spurious nationalism cooked up by people who would rather find scapegoats than solve problems is as unpatriotic as an attachment to any other tired dogma of the past that Americans consigned to the ash heap of history,” McCain said then. “We live in a land made of ideals, not blood and soil.”

Neo-Nazis marching through Charlottesville had chanted “blood and soil” on their way to Emancipation Park, where they protested plans to remove a statue of Confederate Gen. Robert E. Lee.

The phrase has its roots in the “scientific racism” that roiled Europe and particularly Germany in the 19th century. A spokesman for the U.S. Holocaust Memorial Museum pointed JTA to a glossary of Nazi terms the museum posted on its website after the Charlottesville violence.

“Blood referred to the goal of a ‘racially pure’ Aryan people,” the museum definition says. “Soil invoked a mystical vision of the special relationship between the Germanic people and their land. It was also a tool to justify land seizures in eastern Europe and the forced expulsion of local populations in favor of ethnic Germans.”

McCain was furious with President Donald Trump for equivocating following Charlottesville, when the president insisted both sides were to blame for the violence and — despite evidence that the days’ events were organized by white nationalists and attended mostly by their followers — declared that there were “very fine people” on both sides. And McCain’s final statement segues from a warning about the term to an indictment of Trump’s policies, particularly the president’s anti-immigrant postures.

“We weaken it when we hide behind walls, rather than tear them down,” McCain said, an allusion to the wall Trump hopes to build along the border the United States shares with Mexico, and which runs through Arizona. “When we doubt the power of our ideals, rather than trust them to be the great force for change they have always been.”

Trump despised McCain and had to be pressured into honoring the senator’s memory.

Jonathan Greenblatt, the Anti-Defamation League CEO, said McCain’s message was a call to all Americans, and their leaders.

“’Blood and Soil’ is a direct reference to the right-wing nationalist slogan chanted during the racist and anti-Semitic protests in Charlottesville last year – one that, along with ‘Jews will not replace us,’ has in some respects come to symbolize the modern face of racism and hatred in America,” Greenblatt said in an email to JTA.

“In referencing this slogan, I believe Senator McCain is exhorting all of us to rise above the hatreds that have divided us in recent year,” Greenblatt said. “He is reminding us – as Americans and as human beings – that we are bound together by the highest ideals of liberty and equality, and that those ideals cannot be undermined by claims to racial or religious superiority. It is an important message, one should be heard as a clarion call at the highest levels of our government.”

The post John McCain’s parting shot is a warning about the ‘alt-right’ appeared first on Jewish Telegraphic Agency.