Jewish weddings are back — and so are rising prices, staff shortages and lots of uncertainty

(New York Jewish Week via JTA) — After 18 months of barely performing any weddings at all, For Rabbi Howard Buechler of the Dix Hills Jewish Center on Long Island recently found himself with not just one but two requests to officiate on a recent Saturday night.

So he enlisted his daughter, Rabbi Yael Buechler, to officiate at one of them. The bride, Pamela Rosen, and her parents knew her because she has led an alternative service at the synagogue during the High Holidays.

Meanwhile, one of his sons, Rabbi Eli Buechler, assistant rabbi at The Jewish Center, an Orthodox synagogue in Manhattan, was officiating at still another wedding that weekend in the city.

“This is the first time we ever had a Buechler trifecta,” Howard Buechler said.

The unusual feat was driven by an explosion of weddings this fall as couples schedule the big nuptials that were unsafe during the height of the pandemic. Along with growing guest lists, the trend has put pressure on rabbis, caterers and vendors across the New York City area who are working their way through a backlog of weddings.

No one suggests that the pandemic is over, and the uncertainty — of case surges, new variants and gaps between who is and isn’t vaccinated — brings with it its own anxiety. (At all three Nov. 13 weddings, Buechler said, he believed guests were required to be fully vaccinated.)

Still, families have been scrambling to reschedule postponed weddings — and dealing with rising prices, limited venues and ever-changing medical recommendations as they do so.

“The number of weddings this year is off the charts,” said Bill Vidro, the owner of Azure Limousine in St. James, New York, in Long Island’s Suffolk County. “People are getting married this year who rescheduled their wedding from last year. There are weddings now from 10 a.m. until 3 or 4 p.m. because the venue was already booked for the night. We are picking up brides and grooms as early as 6:30 in the morning. They go for pictures and then for an afternoon wedding. It’s insane. And people are getting married during the week because weekends are booked.”

The wedding blitz is a microcosm of a global economy still mired in a pandemic, from shifting medical protocols and rising prices to staffing shortages and supply chain disruptions.

Ariel Bick, 28, said that when she and her husband Steven Victor married on Nov. 6 at The Beekman hotel in Manhattan, they followed city regulations requiring all her guests to be fully vaccinated. Guests were asked to email their vaccination records to her before the wedding; those who didn’t had to show them at the door.

One challenge: the rising price of flowers. Flower growers were very conservative when they planted this year because of the losses they sustained last year when many events were canceled, explained Jay Riether, an owner of Fleurs du Mois in Manhattan.

“That has created a shortage,” he said. “The New York wedding scene is now like what it was pre-pandemic, but flowers are scarce and costs are inflated and the more esoteric flowers are impossible to get. As a result, prices have gone up 20 to 50%.”

That was Bick’s experience. “We booked the flowers a year before the wedding and as we got closer to the date, they told me that the price was going up and that they had to pass along the increase,” she said. “We paid about 20% more because of what they said was an increase in the cost of labor and materials.”

Employers across many industries say they are having a hard time finding willing workers, a dynamic that is fueled by a number of pandemic-related factors. The hospitality industry, which includes caterers, has been hit particularly hard, and Gayle Wilk, an owner of Gala Event & Food Artistry in Melville, Long Island, said costs are going up also for wait and kitchen staff.

“It is very difficult getting help and we are paying them a lot of money,” Wilk said. “We pay a premium for dishwashers – everybody is getting paid more.” 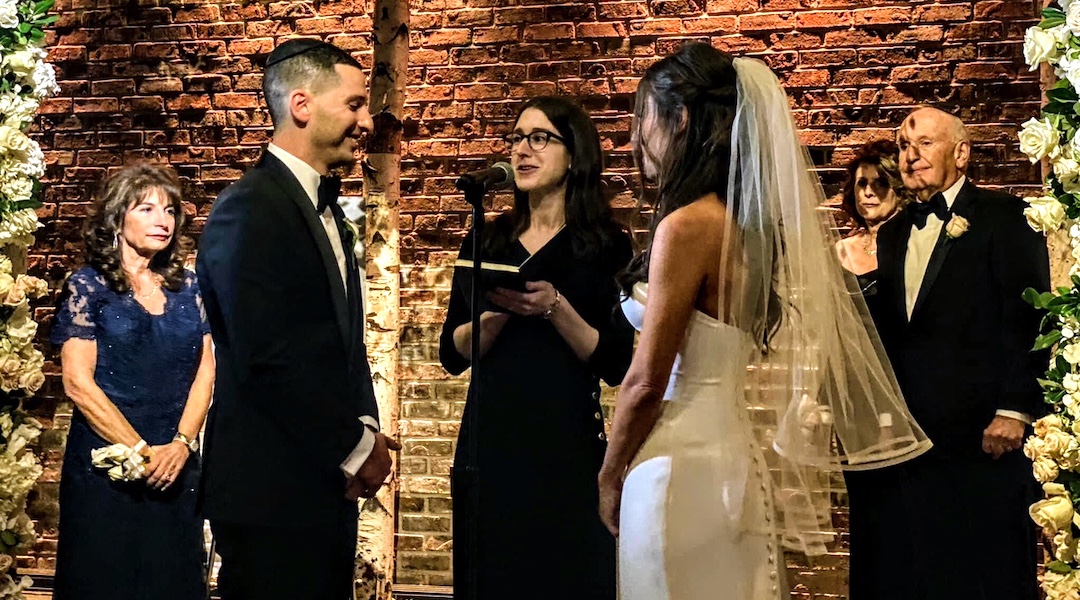 Wilk said her staff wears masks and that there are special precautions in place because of COVID-19. Frankfurters in dough “blankets” are usually served with a communal bowl of mustard; instead, Wilk serves the finger foods with a plastic syringe filled with mustard that guests can squeeze themselves. (COVID-19 spreads in the air, not on surfaces.)

“Guests don’t take anything by themselves, everything is served to them,” Wilk said.

Heather MacLeish, manager of Deborah Miller Catering & Events in Manhattan, said next year promises to be even busier “because we will be seeing three year’s worth of weddings in one year. There will be brunch weddings, two weddings in one day and more Sunday weddings and weekday weddings. Thursday is going to be a big day. And we are already booking 2023 weddings because a lot of dates next year are filled up and we are seeing people who are already married and want to have a party.”

People are anxious to put the pandemic behind them and turn to some semblance of normal, said Wilk.

“People are trying to forget about COVID and they are inviting big numbers again,” she said, adding that some invited guests decline because they don’t want to travel or are “not back mentally.”

But 250 is a bigger crowd than the handful who attended weddings held during the worst of the pandemic. Marlene Kern Fischer of Armonk, New York, said her son and his fiancee had planned a wedding for 220 to be held at a hotel in July 2020. The pandemic forced them to cancel the hotel and the party and Fischer said the couple, Eric Fischer and Danielle Clemons, held their wedding July 2, 2020, in her backyard with just 14 people.

“It ended up being so beautiful, so intimate and special that now my middle son says he wants a small wedding,” she said. “I feel like the pandemic has given people license to do things differently now. Weddings don’t have to be in a hall and the couple may not want to share the intimate thoughts they were able to express in their vows before 220 people.” 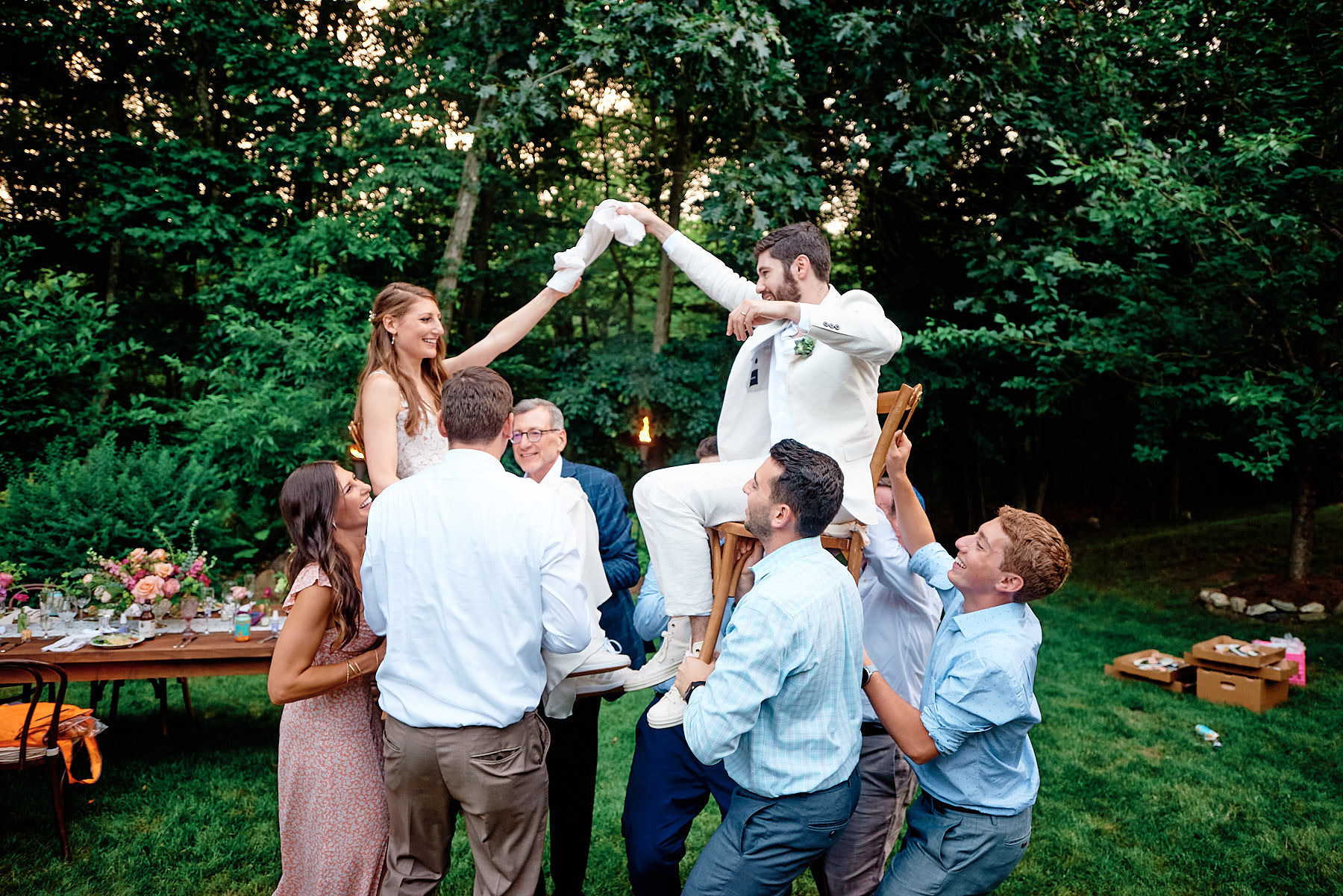 Fischer noted that the bride’s parents drove to her home from Maryland and, because they did not want to stay in a hotel, rented an RV that they parked in her driveway.

The newlyweds had thought of having a large party after the pandemic, but Fischer said the bride decided against it because “she did not want to insult her beautiful little wedding by having something else.”

The event proved so special, Fischer said, that she wrote a book about it, “Gained a Daughter but Nearly Lost My Mind: How I Planned a Backyard Wedding During the Pandemic.”

For all the hassle, however, the months of waiting to get married have made the wedding day all the more special, according to Rabbi Jack Dermer of Temple Beth Torah in Westbury, New York.

“There is real gratitude to be able to be together,” he said. “I officiated at weddings for couples who postponed their marriages for close to two years. Their marriage now is so much sweeter and holy.”