Jewish schools immersing students in ethics and justice, from Selma to ‘grandfriending’

Middle-school students at the Saul Mirowitz Community School in St. Louis have spent a lot of time over the last year outside the classroom.

They traveled to Alabama — the cities of Birmingham, Montgomery and Selma — as well as Memphis, Tennessee, to learn about civil rights. They spent a week at a Wisconsin nature preserve to learn about environmental stewardship. They went to Heifer Ranch in Arkansas to learn about hunger and poverty, spending a night without beds and with little food to give them a sense of what real indigence is like.

“I’ve read about these things, but experiencing even a taste of how families in poverty feel makes an impact,” a student, Hayley L., was quoted as saying on a school blog. “It’s shocking that people live like this every day.”

The trips aren’t just about hands-on learning. They are designed to prime the youths to take action.

“They have a fire in the belly when they return from these trips,” head of school Cheryl Maayan said. “It literally changes their lives.”

After the trips, students conducted an audit of the school’s food, paper and water waste in an awareness campaign to reduce its environmental footprint. They researched local anti-poverty efforts and raised money to support poverty-related charities. They sold water bottles emblazoned with the school’s name to raise funds for a bottle spout at the school water fountain to discourage single-use plastics.

The Mirowitz School’s immersion trips for middle schoolers, now seven years running, are one example of the innovative way that Jewish day schools are trying to impart the values of chesed, or good works, and charity, tzedakah. When schools do it best, they weave social justice, tzedakah and righteous behavior into the culture and fabric of the school both inside and outside the classroom. 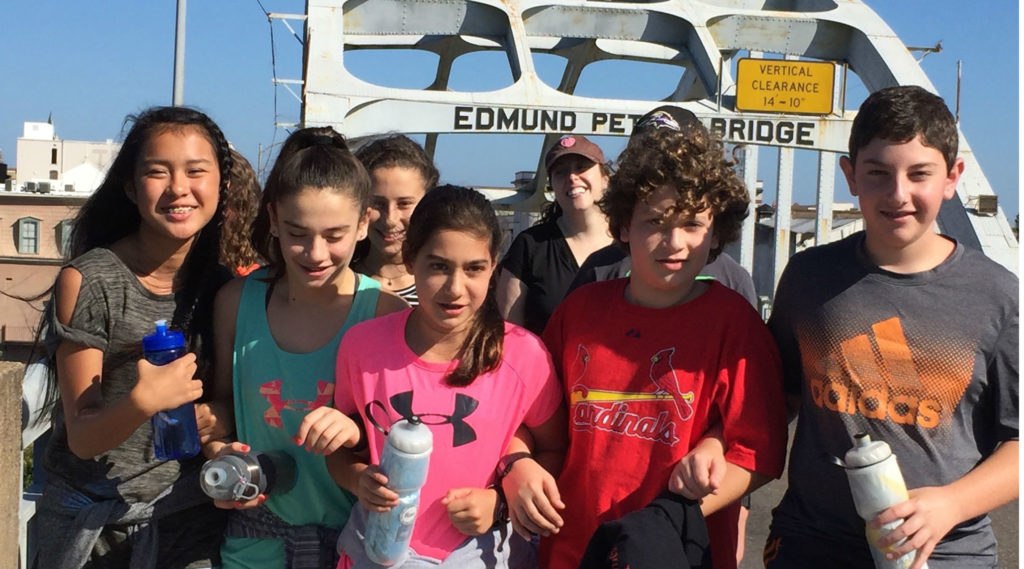 Middle-school students from the Saul Mirowitz Community School in St. Louis traveled to Selma, Alabama, to learn about civil rights as part of a broad social justice curriculum. (Courtesy of the Mirowitz School)

“We see many creative examples of chesed education across the network of schools,” said Paul Bernstein, CEO of Prizmah, a network organization for Jewish day schools. “It’s core to the education we seek to provide.”

The trips are part of a larger trend toward more experiential learning in day schools.

“Our schools are moving toward experiential learning for their students, not only for chesed but for all subjects,” said Melanie Eisen, Prizmah’s director of educational innovation. “Students have the world at their fingertips. To make chesed projects real, our schools are taking their students into their communities and beyond to experience the learning with all their senses. These defining moments will have a lasting imprint on their lives as graduates of Jewish day schools.”

In Los Angeles, 10th-graders at the Milken Community Schools, a nondenominational K-12 Jewish day school, take a weeklong trip to New Orleans to rebuild homes with a local nonprofit working to repair damage wrought by Hurricane Katrina in 2005. The school has taken eight trips there with 10th- and 11th-graders, the first in 2006 just months after the hurricane.

The students do construction tasks such as painting, sanding and installing drywall, and get to know the homeowners they are helping, said Wendy Ordower, Milken’s director of service learning. They talk about Jewish themes and texts connected to their experience, such as the adage from the Ethics of the Fathers, or Pirkei Avot: “You are not obligated to finish the work, but neither are you free to desist from it.”

“I never thought we’d be doing this trip so many years later, but there’s always something to do in the Ninth Ward,” Ordower said. “We just keep going back. A pillar of the school is ‘gemilut chesed’” – doing righteous works. “We really walk the walk. Doing it as a community elevates it.”

At the Epstein Hillel School in Marblehead, Massachusetts, the first grade focuses on fostering intergenerational relationships. Each of the school’s first-graders is paired for the school year with a “grandfriend” — an unrelated older adult connected in some way to the school. The grandfriends, who are in their late 60s and early 70s, come to the classroom every Thursday to participate in discussions and art projects. During the winter, when many grandfriends go to Florida, the students write them letters.

During a class about Veterans Day, a grandfriend showed off the dog tags of his father, who was killed in World War II. Letters to grandfriends about the Rev. Martin Luther King Jr. elicited memories of his speeches, said first-grade teacher Emily Glore.

“The program is an opportunity to pass on some experience and build a really sweet connection with the older generation,” Glore said. “The kids get to see that there are people out there who are invested in their success.” 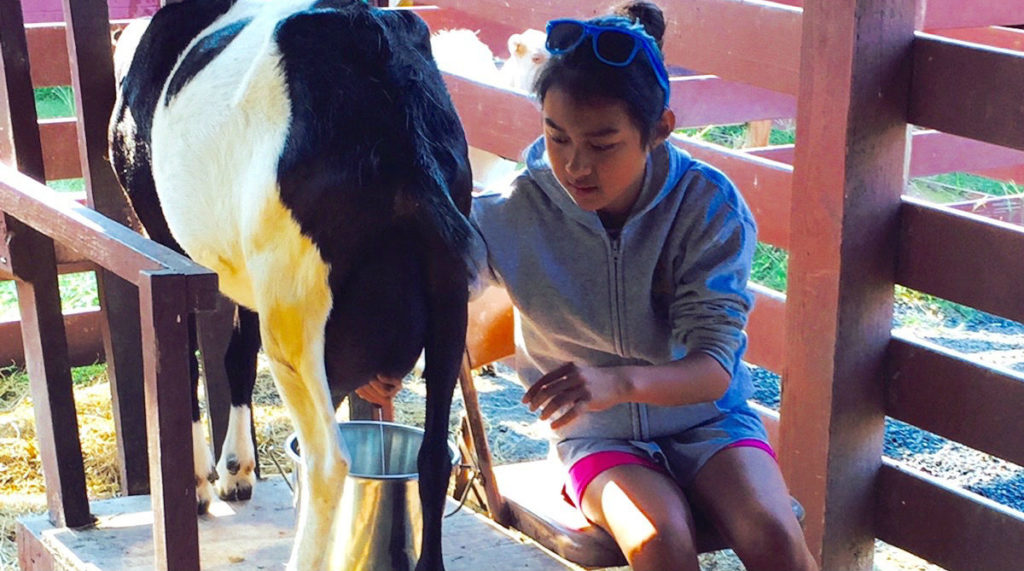 Students from the Saul Mirowitz Community School visited the Heifer Ranch in Arkansas for an overnight hunger and poverty simulation. (Courtesy of the Mirowitz School)

At the Gann Academy in Waltham, Massachusetts, an unusual Yizkor Project is being used as a lesson in chesed and history. Last year, high-school juniors worked for months to uncover the names and histories of 310 individuals buried in numbered graves at the local Metfern Cemetery between 1947 and 1979. The cemetery was literally next door, on the 200-acre property of the shuttered Fernald School.

The students began by researching public and online genetic records to identify those interred, who died at Fernald and Metropolitan State Hospital — local institutions for people with physical and mental disabilities. They studied Fernald, which was the oldest publicly funded institution of its kind in America, to learn about historic attitudes toward the disabled.

They created an exhibit about the history of disability in America from 1897 to 1937 that was displayed for eight months at the Charles River Museum of Industry and Innovation in Waltham, a Boston suburb. This year’s juniors are completing a Yizkor book with bios of each person buried at Metfern and making permanent signs commemorating the dead for the cemetery.

“We use history as a lens for thinking about the narratives of who we are,” Gann history teacher Yoni Kadden said.

“Definitely the coolest thing about it is getting to meet people personally affected by this history, and learning about the history of disability through the eyes of individual people, knowing that we are actually making a difference,” she said.

Many schools require chesed projects. At the Charles E. Smith Jewish Day School in Rockville, Maryland, upper-school students must complete 80 hours of community service to graduate, but on average they do much more, spending 244 hours a year in such activities.

Roz Landy, the school’s dean of students, said the projects have changed continually since she started the program in the late 1980s because activities are chosen by students based on their interests.

“This is not adult driven,” she said.

Students work with developmentally disabled children, do EMT work, stock backpacks with clothes and school supplies for foster children, and work at a horse rescue farm, where they help rehabilitate horses and learn how to educate the public about equine abuse and neglect.

Maayan of the Mirowitz School said that chesed projects are key to children’s emotional and intellectual growth of children, especially in the middle-school years.

“Kids at that age tend to think about things that are not important — whether people like them, how they look,” she said. “We can’t change that, but we can teach them meaningful thinking.”