WASHINGTON (JTA) — Nancy Pelosi’s efforts to reclaim the House speaker’s job got a boost from a New Jersey Democrat, Josh Gottheimer, who is a leader of a bipartisan caucus called the Problem Solvers.

The second-term congressman comes from a tradition of centrism in which Jewish lawmakers and party activists have been prominent, and he is backed by a constellation of well-known Jewish centrists including Nancy Jacobson, Joe Lieberman and Mark Penn.

For the party’s left, however, the idea that Pelosi is making deals with the center is crazy in the wake of an election that they believe was driven by progressive rage at President Donald Trump.

“Dems are choosing to hold the entire 220+ caucus hostage if we don’t accept their GOP-friendly rules that will hamstring healthcare efforts from the get-go,” Rep.-elect Alexandria Ocasio-Cortez, D-N.Y., tweeted on Nov. 23 when news emerged of talks on a deal with Gottheimer. “People sent us here to get things done, not ‘negotiate’ with an admin that jails children and guts people’s healthcare.”

But for the centrists, the election is an opportunity for a necessary course correction for a party that they say has veered too far to the left and for an increasingly polarized country.

“The political parties have become tribes at war, and there seems to be very little ground for the kind of negotiating and problem solving that has characterized our government at its best,” Lieberman, the former senator from Connecticut and co-chairman of No Labels, which is affiliated with the Problem Solvers caucus, told JTA in an interview.

Here are some answers about Pelosi, Gottheimer, her alliance with the centrists and the Jewish component. Gottheimer did not return a request for comment.

Who is Josh Gottheimer?

Gottheimer was a young speechwriter in the Clinton administration who entered the corporate world after the presidency and eventually became a Microsoft executive. In 2016, he ran for Congress in a northern New Jersey district, the 5th, that encompasses a large rural area and suburbs of New York, including Teaneck, with substantial Orthodox Jewish communities. It had long trended Republican.

Gottheimer won and has kept the seat by hewing to the center (and also by a pro-Israel posture that is perhaps closest in the Democratic Party to the policies of Israeli Prime Minister Benjamin Netanyahu’s government).

Does Pelosi need the centrists?

Democrats won at least 232 of 435 seats in the next House; Pelosi needs a majority of votes on Jan. 3 to become speaker. The numbers fluctuate, but there are about 30-40 Democrats who have suggested at various times that they might not support her in the balloting. That means she needs more than half of them to make sure she wins. Winning over Gottheimer and his eight colleagues is a big boost to Pelosi’s chances.

But not at any cost. She and Gottheimer’s team agreed on reforms in tone, but not so much in substance. For example, Gottheimer last summer said he wanted any speaker to “ensure” that committees should reflect the overall ratio of each party in the House — making sure the minority won’t be shunted aside. Pelosi now “commits to a more fair” ratio, and that the parties “recognize” that the process of naming members to committees should be flexible. That language gives Pelosi considerable wiggle room to determine the balance of committees.

And while Gottheimer last summer demanded that a majority of all members, present or not, must vote for a speaker, the demand did not survive the process. That gives an out to the Democrats who said they would not vote for Pelosi: Just don’t show up on the floor on Jan. 3.

Are the centrists the future of the party?

They seem to think so, and the evidence they cite is that centrists predominated in the 42 districts that Democrats have won thus far from Republicans. The key to winning these districts, the argument goes, is reassuring Independents and Republicans who are wary of the left, but still turned off by President Trump’s immigration stands and foreign policy, and his expressions of bias toward minorities.

“There’s such a desire for both parties to start working together again, the number of House districts that have flipped from Republican to Democrat, there’s a light shining into the darkness,” Lieberman said.

Money is also a factor. There are big givers to Democrats on the left, including George Soros and Tom Steyer, but it doesn’t pay to alienate the center and its givers. One of Pelosi’s first public appearances outside Congress post-election was at the annual conference of the Israeli American Council. At the South Florida gathering, she and Sen. Chuck Schumer, D-N.Y., the minority leader in the Senate, had a friendly and affectionate chat with Haim Saban, the Israeli-American entertainment mogul and Democratic giver who reviles the party’s left.

Progressives say same old, same old will not keep voters on board in 2020. They want economic reforms, chief among them increased taxes for the wealthy. Republican districts may have flipped, they say, but that wasn’t only, or even primarily, about attracting moderates. They credit drives to get out the vote for bringing out those who had lost hope.

“Democrats in Washington need to learn the lessons from this election, and fast,” Shaunna Thomas, executive director of UltraViolet, told Common Dreams, a progressive news site, explaining why her group was part of an effort to get Ocasio-Cortez on the tax-writing Ways and Means Committee. “Voters voted for change. Voters voted for bold and progressive leadership, not politicians beholden to the big banks and Wall Street.”

Can the centrists go too far? 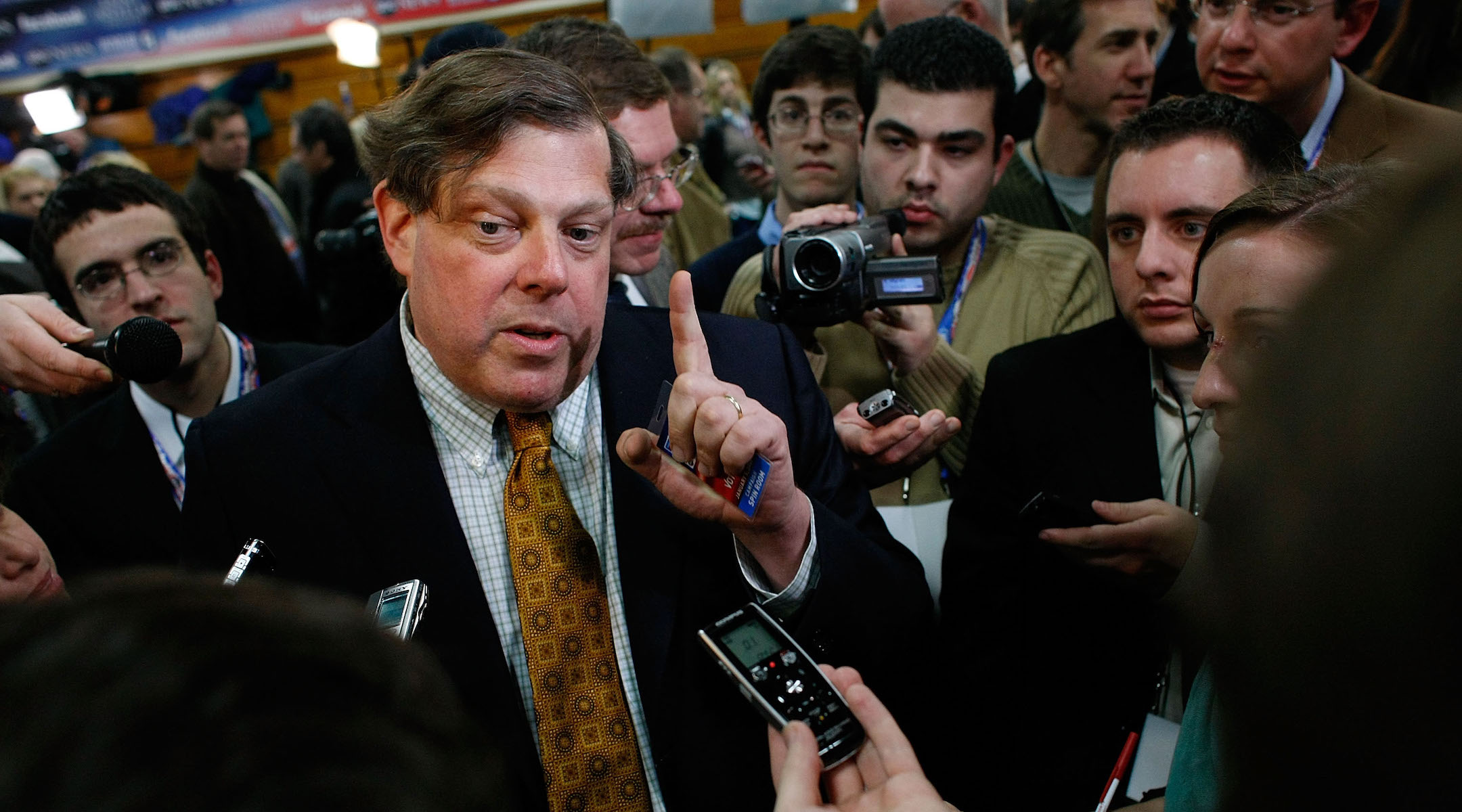 Mark Penn, then the chief strategist and pollster for Democratic presidential candidate Hillary Clinton, speaks to reporters in the “spin room” after a Democratic debate at Saint Anselm College in Manchester, N.H., Jan. 5, 2008. (Win McNamee/Getty Images)

Yes: Mark Penn, a mentor of Gottheimer when they were staffers for President Bill Clinton, is persona non grata among many Democrats, having embraced in recent months some of the more far-out conspiracy theories about his one-time friends, the Clintons, including that they have somehow engineered the federal investigation into Trump and his alleged ties with Russia.

Penn and Jacobson did not return requests for interviews. Lieberman said that Penn is not as central to the movement as the article suggested.

“Nancy is in charge,” he said. “I presume his wife talks to him and he talks to his wife, but I would say Mark is not officially involved in No Labels.”

A red line for Democrats, centrists among them, is when an organization embraces Republicans. In 2014, Joe Manchin, the West Virginia senator who is the marquee moderate Democrat in the Senate, cut off No Labels after it helped oust Mark Udall, the Democratic senator from Colorado whose policies were moderate and who was Manchin’s friend.

Halie Soifer, the director of the centrist Jewish Democratic Council of America, said Gottheimer, whom her group endorsed, would have lost support had he voted against Pelosi or encouraged others to vote against her.

“If it means threatening not to support Pelosi, that is not where our organization is,” Soifer told JTA.

Why are so many of the centrists Jewish?

In addition to Penn, Gottheimer, Lieberman and Jacobson, a No Labels spinoff called the New Center Project is co-chaired by Bill Galston, of the liberal Brookings Institution, and Bill Kristol, who helms the conservative Weekly Standard magazine. (There are also prominent Jewish Democrats on the House’s progressive wing, including Jamie Raskin of Maryland and Steve Cohen of Tennessee.)

Lieberman said that less polarization is good for the Jews, which is why his wing seems to have so many of them. He said both parties have allowed extremism to fester in recent years. Politicians staking out the extremes, he said, are “leaving big national problems unresolved and encouraging anger and cynicism.”

The post Jewish centrists are leading the fight to keep Nancy Pelosi in charge appeared first on Jewish Telegraphic Agency.