Jeremy Corbyn’s supporters see a conspiracy against him 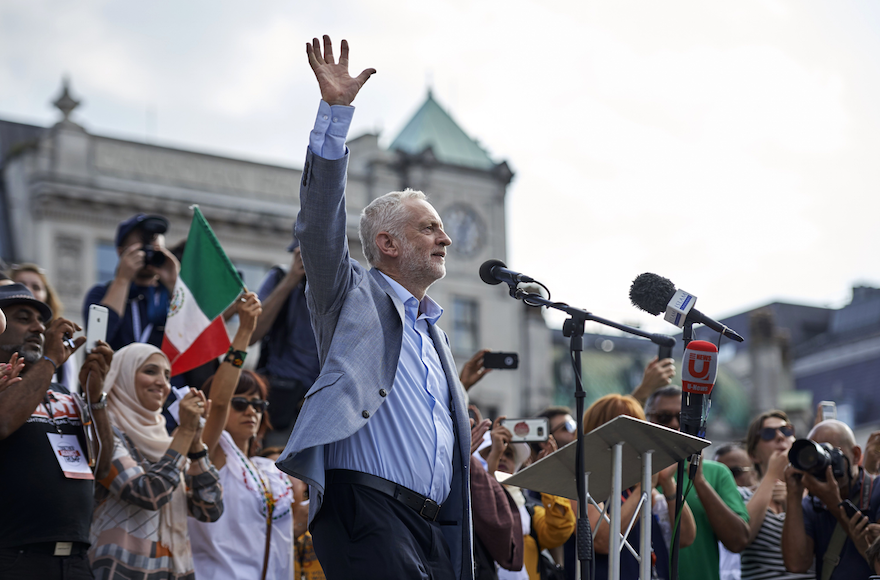 It was, after all, just another day at the office for Corbyn, a far-left politician who at the time was an outlier within the Labour Party for his radical politics. There were other politicians present, including a Conservative Party member. Plus the whole event paled in comparison to some of Corbyn’s earlier stunts, like inviting Hamas and Hezbollah officials in 2009 to Parliament, where he called them his “friends” whom he was “honored” to host at the heart of British democracy.

But the visit last week came back in a big way to haunt Corbyn, who in 2015 became Labour leader and could well become Britain’s prime minister.

Several British media outlets published a picture of him at the event honoring perpetrators of the massacre of 11 Israelis at the 1972 Munich Olympics — one of the most memorable and infamous terrorist incidents in recent history.

A photo showing him holding a wreath over a plaque for Hayel Abdel-Hamid, the mastermind behind the attack by the Black September terrorist group, became international news. It triggered calls for his resignation and highlighted a succession of smaller scandals involving Corbyn’s hostility to Israel and problematic record when it comes to dealing with rising expressions of anti-Semitism among his supporters. Corbyn has downplayed his role in the ceremony and its significance, saying he was there to promote peace.

Condemnation of Corbyn came from both Tories and factions of his own party.

There can “never be a ‘fitting memorial’ for terrorists. Where is the apology?” Jewish Labour lawmaker Luciana Berger asked on Twitter. Israeli Prime Minister Benjamin Netanyahu declared that Corbyn’s actions deserve “unequivocal condemnation from everyone – left, right and everything in between.”

But as with other anti-establishment politicians, such scrutiny and rebukes are paradoxically helping to galvanize support for the embattled Labour leader.

Some of his advocates are rallying to his defense against what they describe as a “Zionist conspiracy” to falsely portray him as anti-Semitic over his hostility to Israel.

Ian Hilpus, a former BBC producer and Corbyn supporter from London, blamed Corbyn’s troubles on “the Zionists.” They are “part of a conspiracy to undermine the most honest man in politics today,” he wrote Thursday on the Facebook page of a group called We Support Jeremy Corbyn. It has 70,000 members.

Such sentiments show that the “rise in anti-Semitism is difficult to stop,” said David Collier, a Jewish blogger who has uncovered several scandals involving Corbyn. “All our attempts are being used to show how much of a ‘fifth column’ we are, and some decent people are taking sides against us.”

Faulting the media for its critical interest in Corbyn’s actions is a page out of the playbook of President Donald Trump, Collier also said.

Some Corbyn supporters traffic in conspiracy theories focused on why the Daily Mail and the Evening Standard ran the Tunisia photo on their front pages, and why virtually all mainstream television and radio news editions either led with the item or featured it prominently. Such theories consider it a rare — and suspicious — degree of media consensus.

“Well … they are ‘God’s Chosen people,’ so they can do what the f**k they like,” Kif Wood, a guitar maker from Cornwall, offered in another discussion on the Facebook group about “Zionist crimes.”

On Wednesday, the Morning Star, a far-left newspaper, reported that unnamed Labour members had co-signed a letter urging the party to launch an “urgent investigation into Israeli interference in the party.”

The trigger for the letter, the Morning Star wrote, was Netanyahu’s Aug. 13 tweet calling for “unequivocal condemnation” of Corbyn. The signers also referred to a four-part Al Jazeera documentary, aired in January 2017, alleging that Israeli diplomats had plotted to “take down” a Foreign Office official.

The “wreath-gate” scandal, as the Spectator and other media call it, is the latest in a long string of cases in which Corbyn is accused of tacitly tolerating or encouraging vitriol against Israel, Jews or both. He has denied the allegations.

In March, the media reported on Corbyn’s two-year membership in a Facebook group rife with Holocaust distortion and conspiracy theories about Jews, and a 2012 post in which he appeared to defend an anti-Semitic mural in London. Corbyn deleted his Facebook account this year amid revelations of his online activity and record.

Holocaust denier Paul Eisen wrote that Corbyn donated money to his  pro-Palestinian advocacy group, Deir Yassin Remembered, though Corbyn denies the claim. The former leader of the Board of Deputies of British Jews, Jonathan Arkush, said Corbyn has “anti-Semitic views” and that his rising popularity is making Jews ask if they have a future in the country.

Corbyn, for his part, has denied having any anti-Jewish bias and has vowed to tackle anti-Semitism head on. He admitted last month for the first time that his party does have a problem but rejected allegations that he is responsible. A strident critic of Israel — he has called for a boycott of settlement goods — Corbyn said that he understands British Jews’ attachment to Israel and opposes any attack on them over Israel’s policies.

In a further bid to appease critics, Labour last month adopted a definition of anti-Semitism that recognizes Israel’s right to exist and cites several examples of how anti-Israel rhetoric crosses over to anti-Semitism. The definition was based on the “working definition” of the International Holocaust Remembrance Alliance, which has been adopted by government of many countries, including Britain.

But the gesture backfired spectacularly when the Jewish community learned that the definition omitted examples of what the IHRA considers anti-Semitic Israel bashing. Corbyn, the critics said, was creating a loophole that would allow anti-Semites to hide behind the cover of anti-Israel rhetoric.

Many Corbyn supporters see each controversy as a new attempt by his enemies — they now include the mainstream representative organs of British Jewry — to besmirch him with fallacies. Often their objections feature thinly veiled dog whistles about Jews.

Take, for example, the Aug. 13 editorial in the Morning Star. It assured readers that despite the intense scrutiny of Corbyn in the media over wreath-gate, his support for the “Palestinian cause will not be traduced into oblivion by wealthy and powerful circles.”

The Jewish Labour Movement, which has been critical of how Corbyn has handled anti-Semitism in the party, has been “part of the project” to discredit him, the Morning Star reported in another article about the fallout of the Tunisia trip.

The wreath-gate scandal prompted unprecedented criticism by mainstream politicians over Corbyn’s anti-Israel agenda. Home Secretary Sajid Javid of the Conservative Party said Corbyn was “not fit to lead” and urged him to resign. Labour’s former prime minister, Gordon Brown, said that “Jeremy Corbyn has got to change.”

But if Corbyn’s popularity is suffering in the general population over such rebukes, it does not seem to be an insurmountable obstacle to his becoming prime minister.

A BMG Research poll for The Independent conducted among 1,481 adult voters just before the Tunisia story broke had Corbyn and Prime Minister Theresa May running neck and neck, with 26 percent of respondents supporting each candidate if elections were held now.

“The wagons are circling around him in ever tighter circles,” Jonathan Hoffman, a pro-Israel activist from London and critic of Corbyn, told JTA.

Much like Trump’s base, Collier said Corbyn’s staunch backers see each new negative revelation as a sign that “the media is against him.”

“And the question is,” the pro-Israel blogger said, “can we do anything but play into their hands?”

The post Jeremy Corbyn’s supporters see a conspiracy against him appeared first on Jewish Telegraphic Agency.