(New York Jewish Week via JTA) — Almost exactly 18 months ago, as the U.S. settled into its first pandemic summer, the Upper West Side’s flagship Jewish community center delivered some bad news to its staff: more than a third of them would be laid off or furloughed.

The Marlene Meyerson JCC Manhattan joined JCCs nationwide in cutting staff when in-person programming abruptly shut down that spring and summer. Facing the devastating wave of COVID that hit the city at the time, the JCC Manhattan found itself unable to offer the range of services that it usually offered — a nursery school, gym, swimming pool, classes, cultural events and more.

A year and a half later, the JCC in a densely and even iconically Jewish neighborhood now has a new director. And even though New York’s experience of COVID has changed drastically since the early days, her top priority is still to bring people back into the building. The Omicron variant — which gripped the city in December and multiplied case numbers by a factor of 20  — has made that harder.

“In terms of a kind of overall spiritual and emotional wellbeing, each of these spikes makes it harder for people to reclaim pre-COVID life,” said Rabbi Joanna Samuels, who became the JCC’s CEO at the beginning of January, succeeding Rabbi Joy Levitt. “Our muscles become weaker in terms of getting out of our homes and connecting with other people. Jewish community, in my opinion, is a very in-person activity.”

Connecting with other people, she says, also means bridging religious and political divides, which only widened during the pandemic despite the neighborhood’s reputation as a liberal redoubt.

Samuels, who grew up in the New York metro area, is the former rabbi of Congregation Habonim, a Conservative synagogue not far from the JCC Manhattan on the Upper West Side. More immediately, she comes to the job after a decade as the founding director of the Manny Cantor Center, a community center in the Lower East Side, another historically Jewish neighborhood in Manhattan.

Since the layoffs in the summer of 2020, the JCC Manhattan has gradually brought people back into the building and served tens of thousands of people, in person and through a slate of virtual programming. But the effects of the pandemic are still very visible. In 2021, nearly two-thirds of the JCC’s programming was virtual — offerings that Samuels said had “unbelievable popularity.”

And while the JCC largely did not provide figures on budgets and staffing in comparison to pre-pandemic levels, the number of employees, the budget and figures like pool membership (which is at 80% relative to before the pandemic) have not returned to where they were two years ago.

“You can wish all you want that you flip a switch and you’re back to January 2020,” Samuels said. “The fact is, that’s not how human nature operates and it’s certainly not how businesses operate.”

Of course, a slow and uneven recovery from pandemic scalebacks is not unique to JCC Manhattan. At the very beginning of the pandemic, Doron Krakow, the CEO of the JCC Association of North America, told the Jewish Telegraphic Agency,”the cuts are going to be painful and deep” and that “the institutions themselves will be smaller, lesser versions of themselves operationally.”

Now, Krakow said, JCCs have reopened and have regained much of their staffs and members, though there are still gaps. Nationally, he said, JCCs employ about 80% of the number of people they did before the pandemic. Enrollment in early childhood centers is at 85% of pre-pandemic levels, mostly due to teacher shortages. Gyms, the beating hearts of many JCCs, have regained 60% of their members.

Krakow said JCCs have been able to regain their functions through a total of $500 million that came from government aid, private donations, foundations and federations, and also got a boost from collaborations with other Jewish organizations.

“There were a lot of JCCs that were crippled, and now the story is that there are no JCCs that are crippled,” he said. “There’s plenty of anxiety about the future but it’s not an existential anxiety right now.”

The ever-shifting challenge of COVID can be seen in JCC Manhattan’s “Cinematters” Social Justice Film Festival, which opened Thursday. A film festival the JCC put on in the fall was hybrid, with attendees viewing films and programs both at the center’s newly renovated auditorium and online via livestream. Omicron, however, has meant that this week’s festival is entirely virtual. 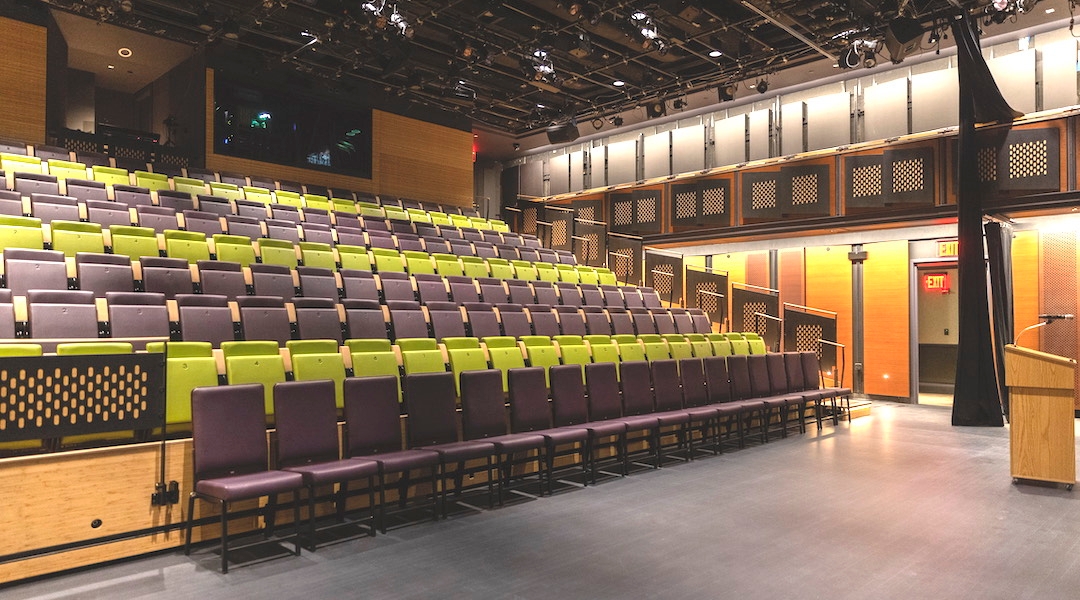 The JCC Manhattan’s Goldman-Sonnenfeldt Auditorium reopened in November 2021 after a year-long renovation, in anticipation of in-person events that have been stalled again by the Omicron variant of COVID-19. (Courtesy MMJCCM)

“​​My hope is that we will have a robust, in-person, crowded, cheek-to-jowl film festival when it is safe to do that, and when people will feel comfortable and relaxed and excited to be out in public, because that’s the special work that a community institution like ours can do,” Samuels said.

While rebounding from the pandemic feels most urgent, Samuels hopes to help heal the neighborhood in other ways. At the Manny Cantor Center, she gained notice for trying to bridge the Lower East Side’s cultural and socioeconomic gaps through collaborative programming and a sliding fee scale that allowed people at different income levels to join the gym and attend classes.

Socioeconomic issues also divided the Upper West Side’s Jewish community over the course of the pandemic — most acutely during a debate over three hotels that the city converted into temporary homeless shelters. Some complained that the shelters brought crime to the area, while others said that the neighborhood’s affluent residents had a responsibility to those less fortunate. Jewish residents and synagogues lined up on both sides of the issue.

Samuels said addressing disparities is part of the JCC’s work, and cited a program in which volunteers tutor students at public schools in low-income neighborhoods. But, she said, she’s more focused on trying to narrow divisions within the local Jewish community.

Despite the Upper West Side’s progressive reputation, Samuels feels that local Jews are fragmented on issues like the Israeli-Palestinian conflict and remain siloed in their religious sub-communities. She hopes to convene discussions that allow people on opposing sides of an issue to engage with each other.

“Our political differences, our religious differences, have led us to have a shrinking sense of peoplehood,” she said. “Even though people might all vote the same ticket in an election — which they, by the way, don’t — …there is nonetheless a shrinking idea that we are actually all part of the same people.”

Samuels said the center’s Zoom programs have been consistently popular over the course of the pandemic, but that she doesn’t see them as the JCC’s future. Despite the ongoing challenge of the pandemic, she still believes that people have a fundamental need to be with each other in person, rather than on a screen.