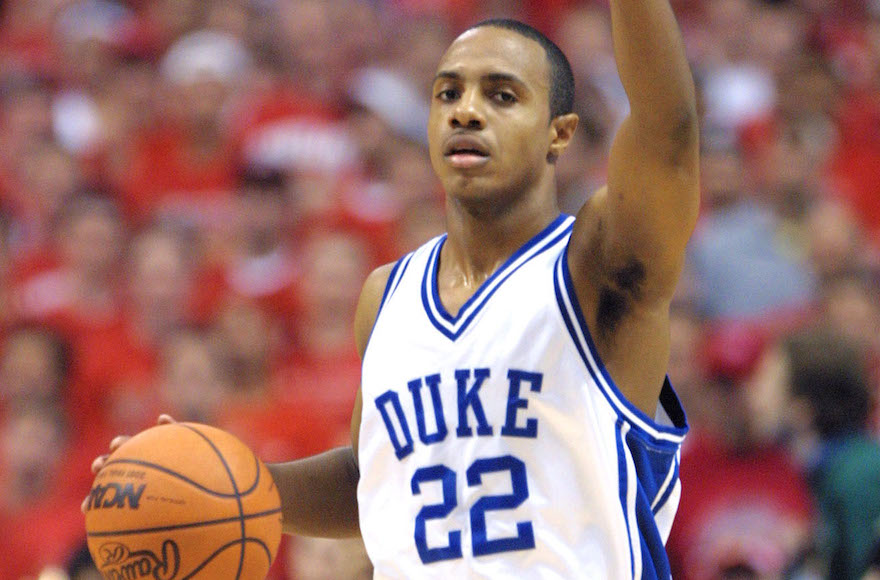 Jay Williams playing for Duke in a game against Maryland in the 2001 NCAA Men’s Basketball Tournament. (Brian Bahr/ALLSPORT/Getty Images)

(JTA) — Jay Williams wants you to know he stills go hard. These days, though, he doesn’t ball in the NBA — he plays in “Jewish leagues” and calls himself the “black Jewish Jordan.”

The former Duke University basketball star, who sustained career-altering injuries from a motorcycle accident and played a nondescript couple of years in the pros, recently made the revelations on sports columnist Bill Simmons’ self-titled podcast.

Williams was the point guard on Duke’s national championship team in 2001 and was picked second overall in the 2002 NBA Draft by the Chicago Bulls. He was the national college Player of the Year in 2002 and a two-time consensus first-team All-American. In 2003, however, he crashed his Yamaha motorcycle, fracturing his pelvis and dislocating three knee ligaments. He officially retired in 2006 following an unsuccessful comeback attempt with the then-New Jersey Nets.

These days, Williams is a college basketball analyst for ESPN and CEO of the Rising Stars youth organization. But Simmons asked him if he still plays basketball often, to which he responded yes, all the time, and in multiple Jewish leagues.

“I bully people, I play serious,” he told Simmons, prompting laughter. “I will punish anybody in all the Jewish leagues I play in. I am like a Jewish Jordan. I’m a black Jewish Jordan. It’s great.”

Williams isn’t the first professional player to play on Jewish hardwood. As a child, superstar LeBron James used to play regularly at the Shaw Jewish Community Center in Akron, Ohio.

Maybe the “Jewish Jordan” title should go to former NBA All-Star Amar’e Stoudemire, who played for the Phoenix Suns and New York Knicks and claims “Hebrew roots.” He announced in April that he was studying Torah and was “in the process” of converting to Judaism. Stoudemire also played for and still partially owns the Hapoel Jerusalem club in Israel.

Then there’s Tamir Goodman, an observant Jewish player who was once dubbed the “Jewish Jordan” by Sports Illustrated. He never made it to the NBA but played professionally in Israel and served in its army.