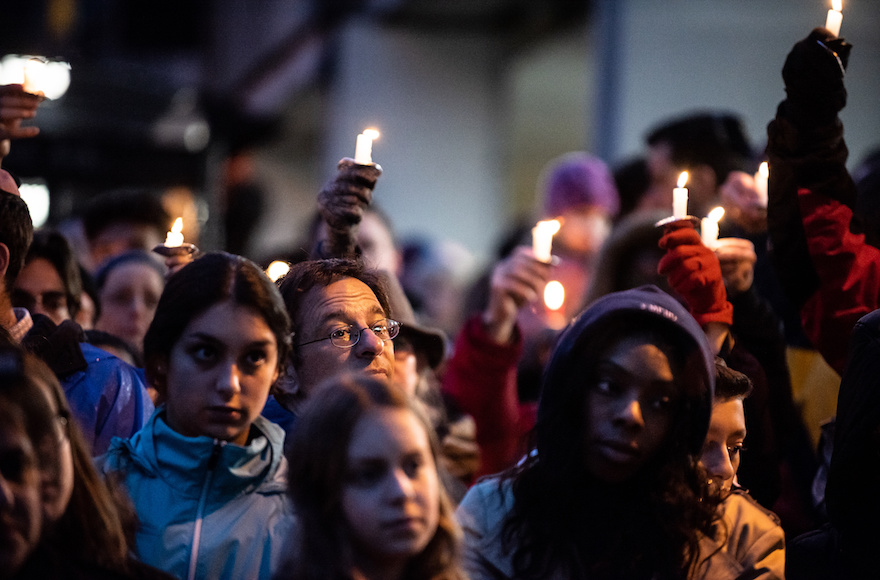 Mourners seen holding candles in the aftermath of the mass shooting at the Tree of Life Synagogue in Squirrel Hill, Pittsburgh, on Oct. 27, 2018. The shooter espoused an anti-immigrant and anti-Semitic ideology online. (Aaron Jackendoff/SOPA Images/LightRocket via Getty Images)

(JTA) — Last August, when I was speaking at a synagogue in East Hampton about a rising tide of anti-Semitism and intolerance, a congregant stood to tell me that the number of right-wing anti-Semites in this country could fit in that sanctuary.

The problem, he assured me, was not the neo-Nazis, “alt-right” white nationalists and virulent anti-immigrant voices filling my social media feeds — but the anti-Zionists on college campuses.

The massacre of Jews in Pittsburgh on Saturday came sadly as no surprise to me. I was one of dozens of Jewish journalists targeted by anti-Semites during the 2016 campaign, showered with the ugliest, most violent anti-Semitic imagery imaginable, my face photoshopped on Holocaust victims, my path into Auschwitz accented by gates that read “Machen Amerika Great Again.”

I have spent the last two years trolling around the darker corners of 4Chan, 8Chan, Reddit and Gab. I have visited the Daily Stormer’s website so frequently I may be on an F.B.I. watchlist. I know what’s out there.

And since the publication last spring of my book “(((Semitism))): Being Jewish in America in the Age of Trump,” I have traversed the country to warn of the dangers of rising nationalism, organized bigotry and anti-Semitic hate. My message: Don’t kid yourself that the most violent forms of hate have been aimed at others — blacks, Muslims, Latino immigrants. Don’t ever think that your government’s pro-Israel policies reflect a tolerance of Jews. We are all in this together.

In most places, synagogues, Jewish community centers, independent bookstores, that message seems to have been absorbed. But virtually everywhere I have gone — especially in Orthodox communities — there have been audience members, sometimes most of them, that have angrily rejected that message.

I have been called a self-hating Jew, deluded, paranoid. President Trump moved the American embassy to Jerusalem, abrogated the Iran nuclear deal, done whatever Benjamin Netanyahu has asked of him. His Orthodox son-in-law is one of his closest advisers. His beloved daughter is a convert. His grandchildren are Jewish.

No, I am told, the scattering of bigots on the fringes of his orbit are of no concern. The BDS movement — Boycott, Divest from and Sanction Israel — is the threat, as are the voices on the left speaking out against Israeli policies and actions toward the Palestinians. Oh, and Louis Farrakhan.

My answer has never been to dismiss those concerns, but to put them into context. The gutter bigotry of Louis Farrakhan, the Nation of Muslim leader, is no better than the hate spewed by right-wing racists like Richard Spencer and David Duke. It should be condemned as forthrightly.

But Farrakhan, if he ever had power, peaked in 1995 with the Million Man March. It has been downhill ever since. Louis Farrakhan, from his South Side of Chicago mosque, can’t muster 100,000 fascists to the streets of Budapest, like Viktor Orban can. He cannot pass a law through parliament declaring it illegal to even suggest that Poles had anything to do with the Holocaust. He cannot win a plurality of seats in the Italian parliament. And he will not be runner-up in the next French election.

We have to consider where power is rising, and the Nationalist Right is a global movement, from Manila to Milan, from Warsaw to Washington — and frankly, in Jerusalem too. President Trump disparages “globalists” — his presidential campaign’s final, closing ad inveighed against “global special interests” as the Jewish faces of Lloyd Blankfein, the Goldman Sachs chief; George Soros, the billionaire philanthropist, and Janet Yellen, the Federal Reserve chair, crossed the screen. But the fact is, “globalist” sentiments — eras of international cooperation and blurred borders — have been essential to Jewish good fortunes.

In the long history of our people, Jews do not tend to do well when nationalist sentiments rise, when borders are sharply drawn and identities are crisply defined. Such times tend to leave us out — isolated, excluded and eventually attacked.

When Robert Bowers interrupted Shabbat services on Saturday, and gunned down 11 people, he was self-radicalized like many others on the far right, with propaganda that convinced him that the International Jew was the threat, orchestrating and financing the invasion of this country by brown-skinned marauders intent on diminishing the stature of the white race — his race, his identity.

The item of fake news that pushed him to homicide was The Tree of Life Congregation’s involvement in a Jewish organization, HIAS, that helps resettle refugees. A gesture of Jewish altruism — charity toward the displaced, many of them Muslims — was seen as yet another outrage in the Jewish-orchestrated “White Genocide.”

“HIAS likes to bring invaders in that kill our people,” he wrote on Gab, the social network preferred by the “alt-right.” “I can’t sit by and watch my people get slaughtered. Screw your optics. I’m going in.”

I’d like to go back and find the man who told me with such confidence that right-wing anti-Semitism is not a threat. I am quite confident he may have a reason why he was right and I was wrong.

I don’t mean to suggest here that anti-Semitism is somehow the fault of the Semites. But other communities in history have turned a blind eye to the threats gathering around them.

It is time we open our eyes.

(Jonathan Weisman is deputy Washington editor at The New York Times and author of “(((Semitism))): Being Jewish in the Age of Trump.”)

HIAS, immigrant aid group vilified by Pittsburgh gunman, vows not to back down

After a mass synagogue shooting, a post-Shabbat service draws thousands

The post It’s time for Jews to open our eyes to the anti-Semitism building on the right appeared first on Jewish Telegraphic Agency.