It’s a Las Vegas honeymoon, of sorts, for Trump and Republican Jews 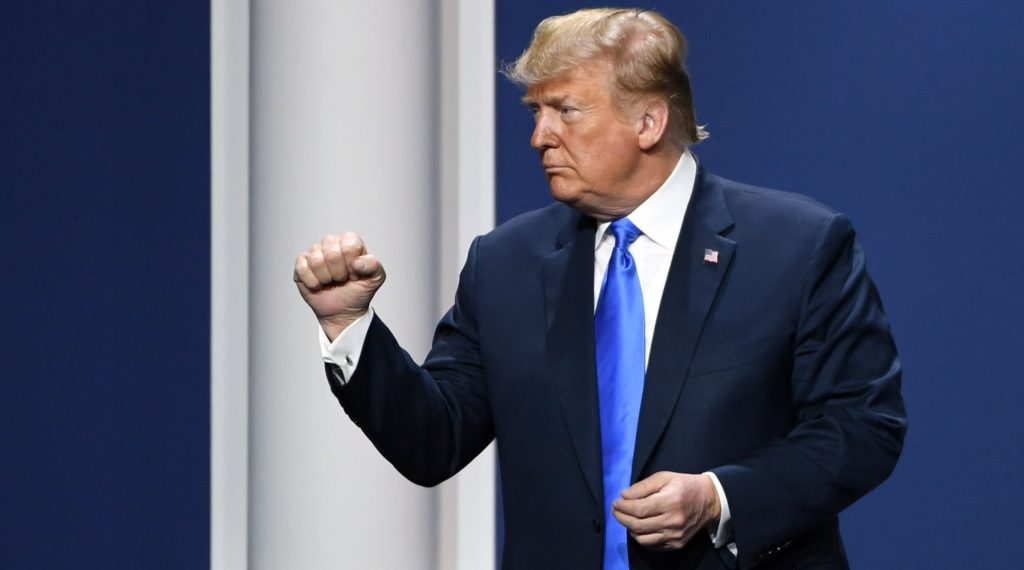 Eight years ago, in the same building — Sheldon Adelson’s Venetian casino resort, the site of the Republican Jewish Coalition’s annual conference — Mitt Romney was the presumptive 2012 Republican presidential nominee, and he made it clear he wanted nothing of the tactics of the reality TV star from New York.

An RJC activist asked Romney if he would be less of a “gentleman” and maybe adopt the “scrappy” style of Donald Trump, who was eyeing a political future as ratings for “Celebrity Apprentice” were fading, and who raised specious questions about President Barack Obama’s citizenship.

No, Romney said, he would not stoop to “innuendo” or even mention Trump’s name. It was an approach embraced by the RJC leadership, which went on to feed major money into Romney’s campaign.

Saturday at the Venetian was a different story. Trump, it is said, has remade the Republican Party in his image, and this weekend, in a hero’s welcome, he showed how much he had brought along the party’s once skeptical Jewish contingent. Both he and Vice President Mike Pence attended the conference to speak.

There were still awkward moments during Trump’s speech that showed what divides many Republican Jews from Trump, even if what was more evident was what has brought them together: Trump’s eager embrace of his advisers’ hawkish pro-Israel policies.

As he did in his last RJC appearance in 2015, Trump on multiple occasions unsettled the crowd when he appeared to address an amorphous Jewish collective that was allegiant to Israeli Prime Minister Benjamin Netanyahu, that once owned factories and that influenced trade policy. He described his asylum policy as “we’re full,” an echo of the pre-World War II policies that kept desperate Jewish immigrants out of America.

In addition, although he noted at the end of his speech the most traumatic event in recent Jewish American history — the massacre of 11 Jewish worshippers in Pittsburgh last October — absent from his remarks was any mention of the far-right extremism that fueled the violence.

No one in the room was more aware of the 180-degree turn the relationship has taken than Trump himself.  At one point a man cried out: “Four more years!”

“That guy who just said that — he used to hate me, can you believe it?” Trump responded, drawing laughs.

Some organizers also spoke out about the change. Former Minnesota Sen. Norm Coleman, now the RJC chairman, introducing Trump by saying, “There were some doubters in this room, and I was foolishly among them.”

Coleman then led the room in a parody of the Passover song, “Dayenu” (“It would have been enough for us”), by listing Trump’s tax cuts and his Israel-related actions, including moving the U.S. embassy to Jerusalem, recognizing Israeli sovereignty over the Golan Heights, pulling out of the Iran nuclear deal and defunding the Palestinians.

Matt Brooks, the RJC CEO, said Trump had earned the love in the room.

“There’s no question all the love that was felt in this room today and as Sen. Coleman alluded to in this remarks, that was not the same situation, there were a lot of people who were not necessarily with the president during the primary process,” Brooks told the Jewish Telegraphic Agency. “But I will tell you now from an RJC perspective in the Jewish community, the amount of support that this president is getting in the Jewish community is growing exponentially.”

Addressing Sheldon and Miriam Adelson, the most generous donors to Trump’s 2016 campaign, who were present at the event, Trump said of his embassy move: “We got you something that you wanted, I can tell you, Sheldon and Miriam, that is the most important thing, I think, that ever happened in their life.”

In describing the moment he told David Friedman, the U.S. ambassador to Israel who has longstanding ties to settlements, that he would recognize Israel’s claim to the Golan Heights, Trump said, “He was like a wonderful, beautiful baby. He said, ‘Do you really — you would do that sir?’ And I said ‘Yeah, I think I’m doing it right now! Let’s write something up.’”

But people in the room pushed back when Trump bizarrely assumed they vote Democratic, like the majority of the rest of American Jews.

“We didn’t,” the crowd replied, twice.

At least three additional times, Trump used the collective second person “you” in addressing the Jews in the room.

“I stood with your prime minister at the White House to recognize Israeli sovereignty on the Golan Heights,” he said.

That drew condemnation from the American Jewish Committee and the Anti-Defamation League and Jewish Democrats.

“Mr. President, the Prime Minister of Israel is the leader of his (or her) country, not ours,” the AJC said on Twitter. “Statements to the contrary, from staunch friends or harsh critics, feed bigotry.”

A Democratic congresswoman, Rep. Ilhan Omar, D-Minn. — whom Trump mocked in his speech — has come under fire from Republicans and fellow Democrats for her perceived invocation of the dual loyalty trope.

Trump also collectivized Jews as influential on trade policy in defending his introduction of tariffs.

“Maybe you could explain that to some of your people who say ‘Oh we don’t like tariffs,’” he said.

And he seemed to imagine a room full of onetime captains of industry frustrated by the 1990s NAFTA free trade deal that he has reviled.

“Many of you people have factory and plants, they’re still empty,” he said.

The same generalizing of a sometimes hostile Jewish monolith cast a shadow over Trump’s first appearance before the RJC, at its 2015 presidential candidate forum.

The remarks made many — not all — Jewish Republicans, already wary of Trump for his lack of experience and his biased statements about other minorities, even more skeptical of his chances at the time. Adelson waited until May 2016, when Trump’s nomination was all but certain, to board the Trump train and had to issue a public appeal to persuade fellow Jewish Republicans to join him.

This time around, Trump’s history of invoking the very tropes that got Omar into trouble — that Jews buy influence, and that they are dually loyal to Israel — got a pass at the RJC. Halie Soifer, who directs the Jewish Democratic Council of America, watched Trump’s speech on C-Span and was stunned not to see any push back.

“For them to decry anti-Semitism on the Democratic side when it was exactly the same references that they now applauded and welcomed back is baffling,” she told JTA.

A source close to the RJC said that the leftward tilt of the Democrats, the rise of Israel-critical figures like Omar and Trump’s Netanyahu-friendly policies make backing Trump an easy choice, despite the discomfort at times.

Notably, the RJC did not fill all the 1,500 seats in the room, even with bodies added from a social media call to Las Vegas-area Trump fans, Jewish and non-, to attend. A group that told JTA that they were Las Vegas Filipinos for Trump posed for photos in the conference hall, and some sported the red Trump kippahs that the RJC gave out.

Trump said the Democrats were the party of bias.

“The Democrats have even allowed the terrible scourge of anti-Semitism to take root in their party and their country,” he said, referring to Omar.

Omar was the absent star of the conference: Vice President Mike Pence, House Minority Leader Rep. Kevin McCarthy and New York Rep. Lee Zeldin all referred to her at length.

The RJC also screened a video that said anti-Semitism “is too often being led by the liberal wing of the Democratic Party.” It singled out Omar, showing her photo next to text saying “congressional leaders employing disgusting anti-semitic slur” and a photo of the Tree of Life synagogue complex in Pittsburgh. The narrator said “The stakes could not be higher.”

The alleged killer behind the Pittsburgh shooting was a white supremacist.

Jewish Democrats scoffed at attempts to tar their party as posing the greater threat to Jews. Rep. Adam Schiff, D-Calif., the Jewish chairman of the House Intelligence Committee, noted that Trump, after the deadly 2017 neo-Nazi march in Charlottesville, Virginia, said there were “some very fine people” on both sides of that clash.

“The president needs to look inward when it comes to the rise of anti-Semitism in the country,” Schiff told CNN.

Protesters with IfNotNow, the Jewish group that opposes Israel’s occupation, interrupted the conference with a chant that subtly invoked the neo-Nazi rallying cry from Charlottesville, “Jews will not replace us.”

“Jews are here to stay, the occupation is a plague,” they said as security escorted them out of the room.