It ain’t over ’til it’s over: Jewish takeaways from a wild election week

(JTA) — I’m writing this just as the Pennsylvania secretary of state announced that the bulk of ballot counting may be done by the end of Thursday. If trends continue, Joe Biden could be president-elect by the time you see this.

Or not. Pennsylvania’s 20 electoral votes would give Biden 273, the majority he needs. There are four other states in contention. North Carolina still looks solid for Donald Trump; Biden is winning in Arizona and Nevada, although trends could change. Georgia could pull out a surprise win for Biden.

What are the Jewish stories here? There are plenty. Here are a few.

Florida wasn’t all that: The Republican Jewish Coalition spent a good chunk of the $10 million it budgeted getting out the Jewish vote in the Sunshine State, including $3.5 million in TV ads. Jewish Democrats flooded the state’s Jewish community with GOTV calls. But Trump increased his share of the vote from 2016 and won the state, and it looks like it could have been a separate GOP ethnic targeting op that did the job: Biden fared worse than expected among the state’s Hispanic voters, who tend to hail from countries such as Cuba and Venezuela, where susceptibility to the notion that Democrats are trending socialist runs high.

The badasses are back and the squad is bigger, but Rose wilted: Every member of the “badass caucus,” the five moderate Democratic congresswomen with national security backgrounds who won GOP districts in 2018, won reelection in a year where the GOP knocked off other Democrats. Among them are two Jewish women, Elaine Luria, a former Naval commander who represents the military-heavy Virginia Beach area, and Elissa Slotkin, the ex-CIA analyst who represents a district straddling Detroit and Lansing. There were concerns that their collective decision to vote to impeach Trump — a pivotal moment in 2019 — would harm them, but they’re back.

“The Squad,” the Israel-critical quartet of progressive congresswomen elected in 2018, is now a sextet, with the addition of New York’s Jamaal Bowman, who ousted longtime pro-Israel stalwart Eliot Engel in a primary, and Missouri’s Cori Bush, who pulled off a similar primary upset in the St. Louis area. Of the six, three are supportive of the boycott Israel movement: incumbents Rashida Tlaib of Michigan and Ilhan Omar of Minnesota, who are outright supporters, and now Bush ,who has said it is an “important” movement. Bowman, like Ayanna Pressley of Massachusetts, another squad member, has made clear his opposition to BDS, while Alexandria Ocasio-Cortez of New York, the best-known member, has not made her views known. Tlaib, perhaps the most Israel-hostile of the group, now has additional street cred for turning out the vote in her district and helping Biden wrest away a state Trump won in 2016.

Another moderate Jewish Democrat who prevailed was Josh Gottheimer, the New Jersey congressman who founded the Problem Solvers Caucus, which seeks to find common ground between Republicans and Democrats. One who went down however was Max Rose of Staten Island. Rose’s opponent, Nicole Malliotakis, sought to link Rose to anti-police protests in New York City; Staten Island is heavy with first responders.

Republicans stay steady: Two Jewish Republicans are going back to Washington. Lee Zeldin handily headed off a challenge in New York’s 1st District, in eastern Long Island, from a Jewish challenger, and David Kustoff in Tennessee sailed back home. Of the Republican Jewish challengers, only Lisa Scheller, facing Jewish Democrat Susan Wild in Pennsylvania’s 7th seems to have a chance, although her lead is decreasing as the vote is counted.

Ossoff to runoff: Jon Ossoff, who challenged incumbent Republican Sen. David Perdue in Georgia, appears headed to a January runoff; according to Georgia’s laws, unless a candidate gets 50% plus one, it goes to another election, and Perdue is now at just 50%, with more votes from Democrat-heavy Districts yet to come in. That makes two runoffs: A special election pits Black pastor Raphael Warnock against Republican Sen. Kelly Loeffler.  In a Georgia Senate election season that has already featured allegations of bigotry, get set for a roller coaster ride.

Trump is here to stay …. Even if he goes. I analyze how Trump has changed the American landscape, and my colleague Ben Sales asks folks what that portends.

Pittsburgh reemerging: I talked to folks in Pittsburgh on Election Day, and learned how their votes were shaped by the synagogue massacre there two years ago.

All eyes on Josh: Ben Sales tells us what we need to know about Josh Shapiro, the Pennsylvania attorney general whose profile has skyrocketed in this most contentious of elections.

Outfoxed: Arizona was the first state to be called for Biden among the states Trump won in 2020. Making it more painful for the president was the fact that it was his favored news network, Fox, that first made the call. My colleague Gabe Friedman takes a look at the decision desker, Arnon Mishkin, who gave Trump heartburn. (Some news organizations still haven’t called the state.)

Pastoral care: How are Jews getting through this week’s uncertainty? Sometimes, with prayer, or the help of their rabbis. My colleague Shira Hanau goes where angels sometimes tread. 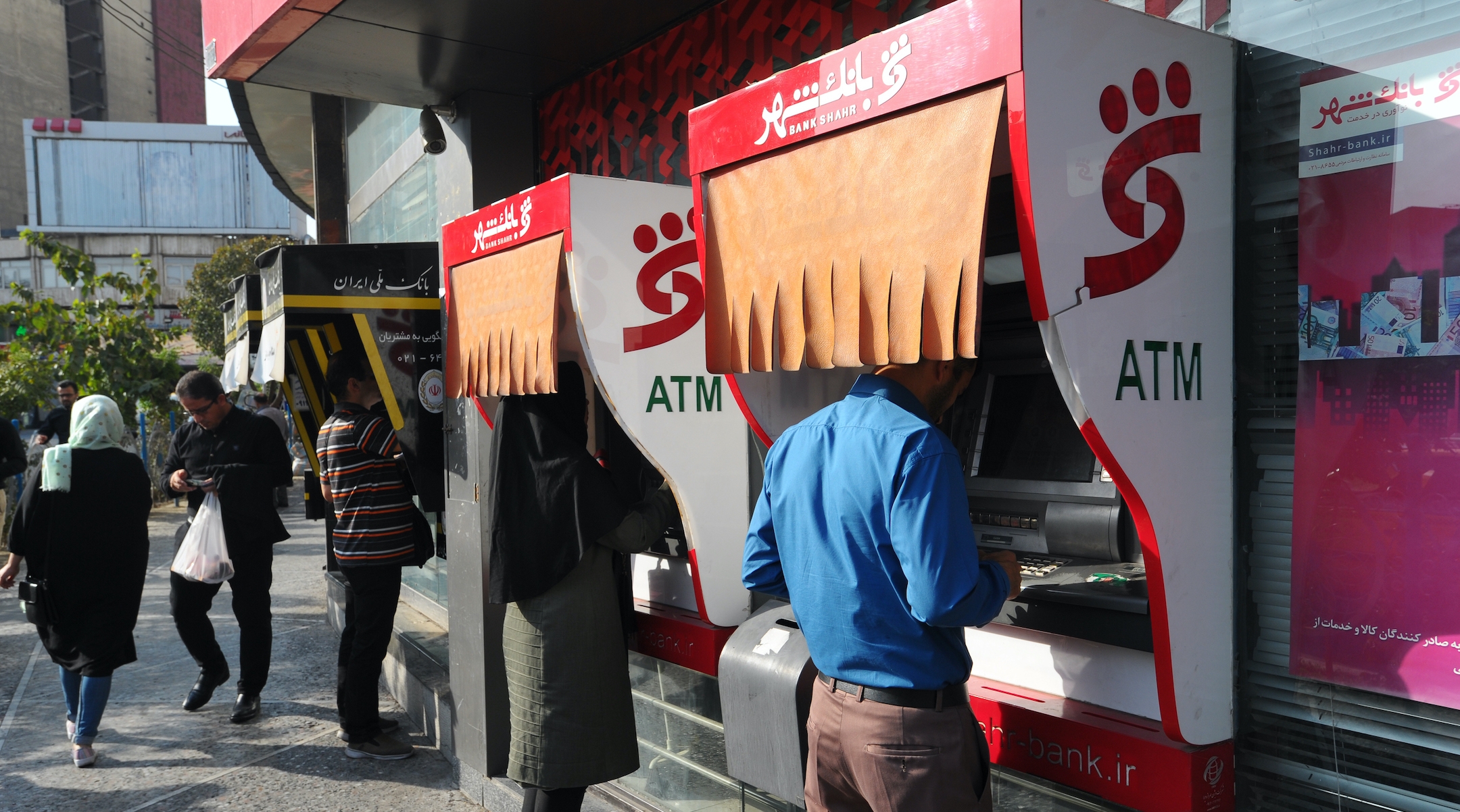 The Trump administration has ramped up sanctions against Iran and other bad actors. President Donald Trump also deeply distrusts the bureaucracy, which he calls the “deep state.” That distrust extends to the very bureaucrats whose job it is to make sure the sanctioned remain sanctioned. At Export Compliance Daily, Ian Cohen examines the contradiction and its effects. 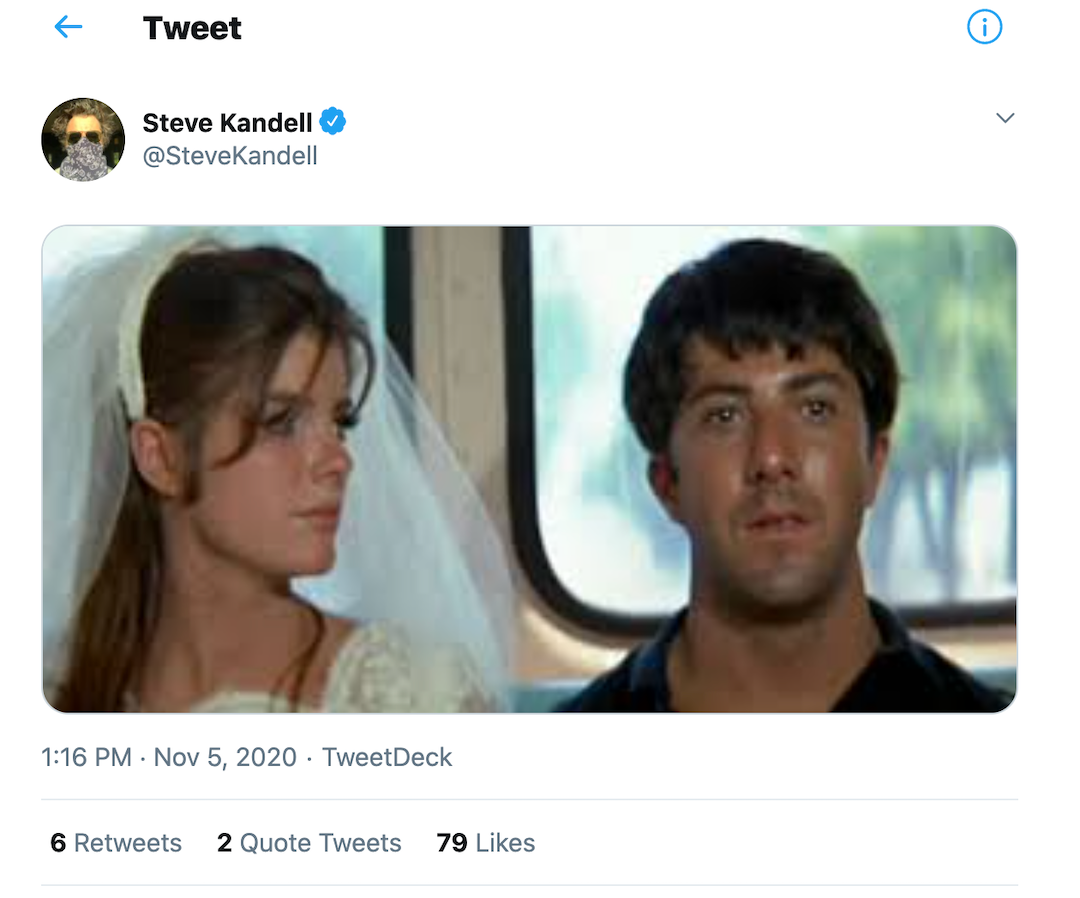 Remember “The Graduate”? Sure. You may not remember its ambiguous ending; the ambivalent look Katharine Ross gives Dustin Hoffman as they ride a bus into an uncertain future. The uncertain future is here, and BuzzFeed’s Steve Kandell thinks it captures our moment.