Israel’s Nationality Law will humiliate the Jews of the Diaspora 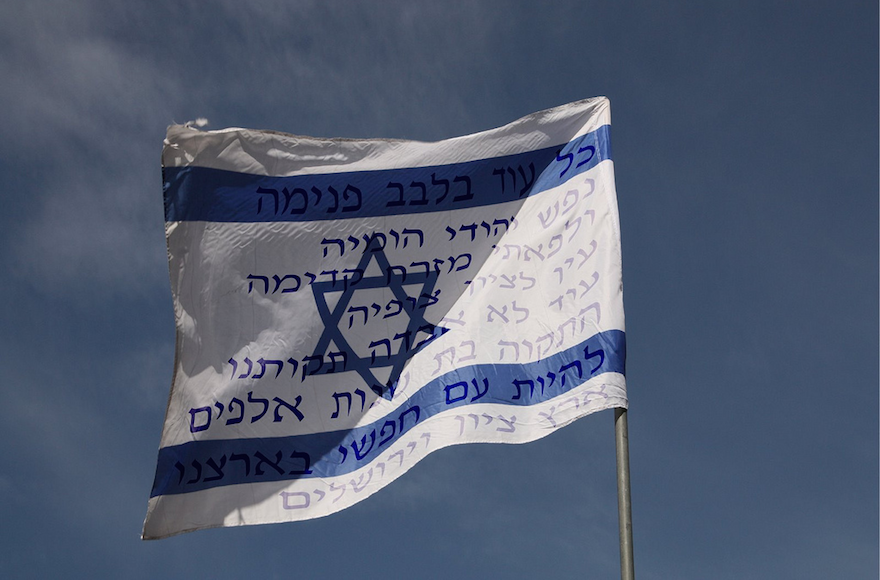 An Israeli flag is inscribed with the text of “Hatikvah,” the national anthem. (Avital Pinnick/Flickr Commons)

JERUSALEM (JTA) — There are many problems with the Nationality Law nearing passage as the Knesset wraps up its summer session on Sunday, not the least of which is that there is no reason for it. No Israelis challenge the Jewishness of the state, thus the law is unnecessary.

Unfortunately, something unnecessary can also be harmful. The language of the bill, which is officially called “Basic Law: Israel as the Nation-State of the Jewish People,” gives constitution-like force to the notion that Israel is a state for the Jews, from its flag and national anthem to the Hebrew language. It demotes Arabic from an officially recognized language to a “special” status. The latest version softened a declaration that could have led to exclusive, Jewish-only towns to say that Israel “views the development of Jewish settlement as a national value and will act to encourage and promote its establishment.”

The effect of this measure is to humiliate non-Jewish citizens of Israel, especially its Arab citizens. If it passes and remains on the books, Israeli Arabs will be told that they may be citizens but will be reminded every day that they are not part of the nation.

Jews in America will never be able to understand what that means because for them, being American is being a citizen and a part of the nation. The unique and challenging situation in Israel is that the country differentiates between nationality and citizenship — that is, all citizens of Israel are considered “Israeli,” but individual ethnic and religious groups, like Jews, Arabs and Druze, are assigned a “nationality.” The new Basic Law would enshrine that distinction in a way that comes close to making non-Jewish Israelis second-class citizens, a slap in the face to Israeli Arabs.

The words “in the Diaspora” were added because of pressure from haredi Orthodox parties afraid the law would push the State of Israel to accommodate the religious concerns of non-Orthodox Jews as a show of their connection to Israel. The haredim feared that the previous wording could have been used to establish in law such things as the enlargement of the egalitarian Western Wall prayer area that has been scuttled by the government. It would have been a sign of the state’s recognition of Diaspora Jews with different Jewish practices.

But now the bill’s wording makes clear that the government’s efforts should be done only in the Diaspora. Israeli law would not require Jews in Israel to make any effort to accommodate Jews coming from the Diaspora. In other words, Israelis have nothing to learn from you and owe you no favors. We are the big brother; we know it all.

If this law comes into being, the logical outcome should be that Israeli Jews turn around the current equation and send donations to Jews in America. In reality, regardless of whether this legislation passes, I cannot imagine that happening.

Why is this legislation gaining traction now? Prime Minister Benjamin Netanyahu, who is always under criticism from Israel’s right, usually in the form of attacks by his Education and Diaspora Affairs minister, Naftali Bennett, sees this as a painless sop to the right and a final accomplishment before the Knesset adjourns for the summer.

With a whiff of early elections in the air, this bill likely will be the Knesset’s ultimate action before the curtain falls. Netanyahu would have it as a last-minute buttress to his right-wing credentials. But this action, however symbolic, is a symbol that neither Israeli Arabs nor the Diaspora need or want to hear.

(Rabbi Dr. Ariel Picard is director of the Shalom Hartman Institute’s Kogod Research Center for Contemporary Jewish Thought and a member of the institute’s Executive Committee.)

The post Israel’s Nationality Law will humiliate the Jews of the Diaspora appeared first on Jewish Telegraphic Agency.