RIO DE JANEIRO (JTA) — Less than one month after Benjamin Netanyahu gained pop star status across Brazil for blending in with the locals during the very first visit of a sitting Israeli prime minister, Israel is making headlines in the land of samba once again.

A 130-strong Israeli military and search-and-rescue team landed here on Sunday and has been working against the clock to find survivors of a dam collapse last Friday around a mining operation in a rural area of the Minas Gerais state.

The humanitarian delegation has earned wide praise, but also criticism from critics of Israel who say it represents a diversion from its conflict with the Palestinians.

“It’s amazing how people in the streets are sympathetic, asking for selfies with us. They are grateful for the Israeli army and the Jewish people,” Rabbi Nissim Katri, of the Chabad House in Belo Horizonte, told JTA. “They seem amazed with this type of solidarity that is not so common in our modern world.”

The dam collapse that left 65 people confirmed dead and nearly 300 missing took place not far from the city.

The Israeli mission includes soldiers and reserve officers, among them engineering specialists, doctors and rescue personnel. Hosted by the Brazilian army, they are lodged at a military base, where Katri’s synagogue has been providing kosher food, religious services and more.

“I offered that Israel would dispatch aid to the disaster site and assist in the search for survivors. We agreed that an Israeli mission would leave within 24 hours,” Netanyahu tweeted after talking to Brazil’s new President Jair Bolsonaro on Saturday.

Netanyahu attended Bolsonaro’s inauguration on Jan. 1, when the ardently pro-Israel Christian politician reiterated his promise to move the Brazilian embassy from Tel Aviv to Jerusalem soon. Last Saturday, he highlighted the Israeli humanitarian aid to the media and through social media channels.

“By phone the 1st Minister of Israel, @netanyahu offered us help to search for missing people in the Brumadinho. We welcome and appreciate this Israeli technology at the service of humanity,” Bolsonaro tweeted. Mud and mining waste has buried everything for miles around the iron ore mine. The number of missing is rising fast and chances of finding survivors are low and decreasing by the hour. In addition to the dam used to store mining byproducts that burst on Friday, a second water dam is said to be at risk of breaking, making the rescue work even more tense.

Brazil’s 120,000-strong Jewish community is also mobilizing to gather donations for victims of the dam breach and to help the Israeli workers.

Rabbi Uri Lam, who has just ended his nearly four-year term as spiritual leader of the Congregacao Israelita Mineira synagogue in Belo Horizonte, feels a personal connection to the disaster. The inn where he used to stay with his family in Brumadinho has been buried by the mud. Owners, guests and employees are all missing.

“Jewish communities across Brazil are mobilizing to donate whatever is needed. The presence of the Israeli forces also fills the Brazilian Jewish community with pride. We know that in any part of the world where there are major disasters, whether in countries with or without diplomatic relations with Israel, Israelis will mostly always be the first to offer help,” the Sao Paulo-born rabbi told JTA.

The Jewish federation of Rio Grande do Sul, Brazil’s southernmost state that borders Uruguay and Argentina, has sent its security manager and crisis and disaster management expert Ezequiel Gotlib, who is now supporting the Israeli delegation. 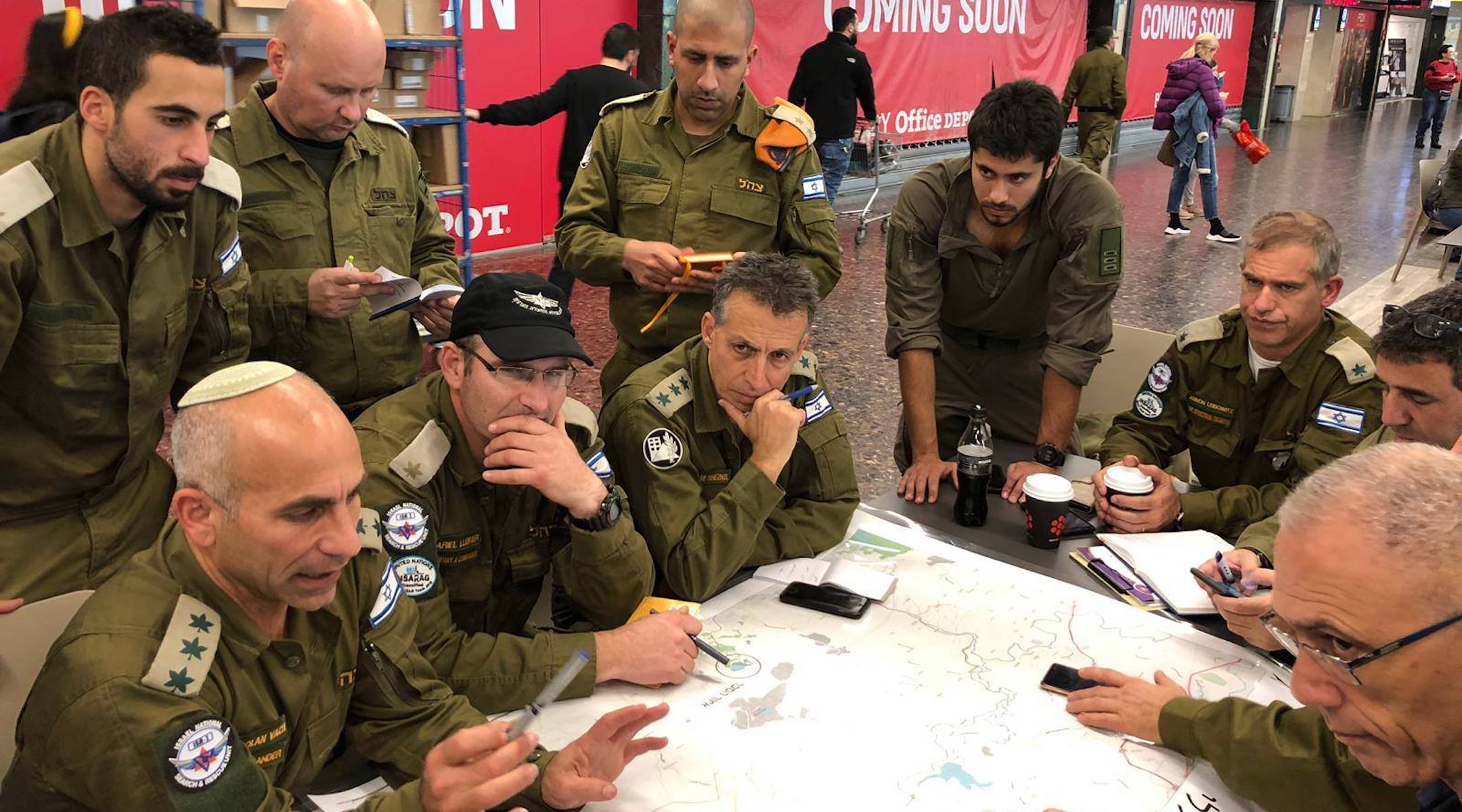 The Israeli mission to Brazil includes soldiers and reserve officers, among them engineering specialists, doctors and rescue personnel. (IDF)

“Israel’s action is of great value and shows that the ties between both countries are increasingly strengthened. We hope Gotlib’s expertise will be useful in helping to locate all the victims who are still missing,” the federation’s president Sebastian Watenberg told JTA.

The humanitarian mission could not, however, deflect criticism of Israel and a Brazilian government that has sought to reverse strained ties with the Jewish state. Lieutenant Pedro Aihara, from the Minas Gerais Fire Department, spoke up on Monday to deny recent articles in the Brazilian press that said the Israeli rescue equipment would not be helpful.

“The cooperation with Israel has been extremely effective,” he said, adding that Israeli equipment will be useful for finding people located deeper in the mud and need only minor adaptations to move about.

Israeli ambassador Yossi Shelley blamed the negative press on “jealousy” and highlighted that five bodies were found in a matter of hours.

“Israel has all the necessary equipment to save lives, including plunging into the mud. This news out today is fake news,” the diplomat told Folha de S.Paulo newspaper.

“We will leave aside the people who want to fight, we will do the work that needs to be done and the results will come over the next few days. Our actions show the great cooperation and great heart of Israel. We won’t listen to those who are jealous. We do everything with our hearts,” Shelley replied.

The 16 tons of equipment brought by the Israelis include a mobile signal localization system, high-quality submarine sonars, voice/echo detectors and drones.

“In other countries, we receive only praise, as in Mexico, in the Philippines. Whoever misses the poor relationship between Israel and Brazil needs to get used to a new reality and swallow the hat,” Shelley added, using a literal translation from Hebrew meaning that opponents will be frustrated.

“Israel does this because it is a friendly country. It was always around, but was always mistreated by former governments,” he wrote on Twitter. “Excuse me, but for all the bad guys on duty, you just have keep quiet and look how much good comes of this approach.”

Cartoonist Carlos Latuff, a frequent critic of Israel and Zionism, released a drawing in which President Bolsonaro welcomes an Israeli military unit whose hands are stained with blood. They answer, “Sorry for the delay! We were busy killing Palestinians.” 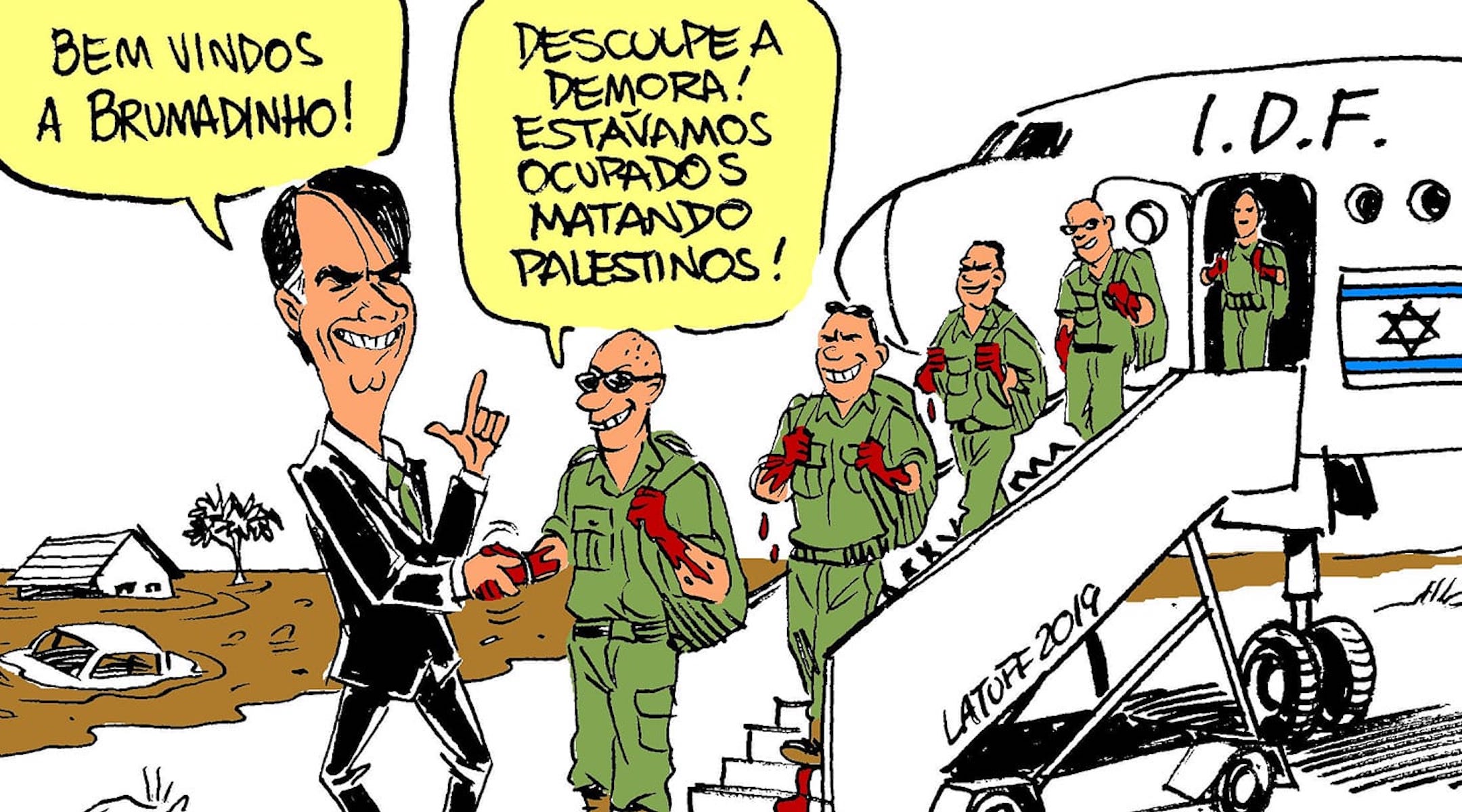 Cartoonist Carlos Latuff, a frequent critic of Israel and Zionism, released a drawing in which President Bolsonaro welcomes an Israeli military unit whose hands are stained with blood. (Carlos Latuff)

“Latuff is an anti-Semitic racist, who uses Israel to distill hatred against the Jews,” Israel’s honorary consul in Rio, Osias Wurman, told JTA. He noted that the Simon Wiesenthal Center included the cartoonist on a list of “top ten” anti-Semitic incidents in 2012.

Leandro Spett, a Jewish cartoonist, posted a drawing in response Latuff’s, which quickly went viral in social media. As Brazilian and Israeli rescuers struggle to reach a survivor’s hand sticking out of the mud,  a Palestinian cartoonist watches the scene. The Brazilian shouts, “You stay there and don’t do anything? Go get help! Go!” The smiling cartoonist continues to depict the scene and writes: “Israeli kills a survivor.” 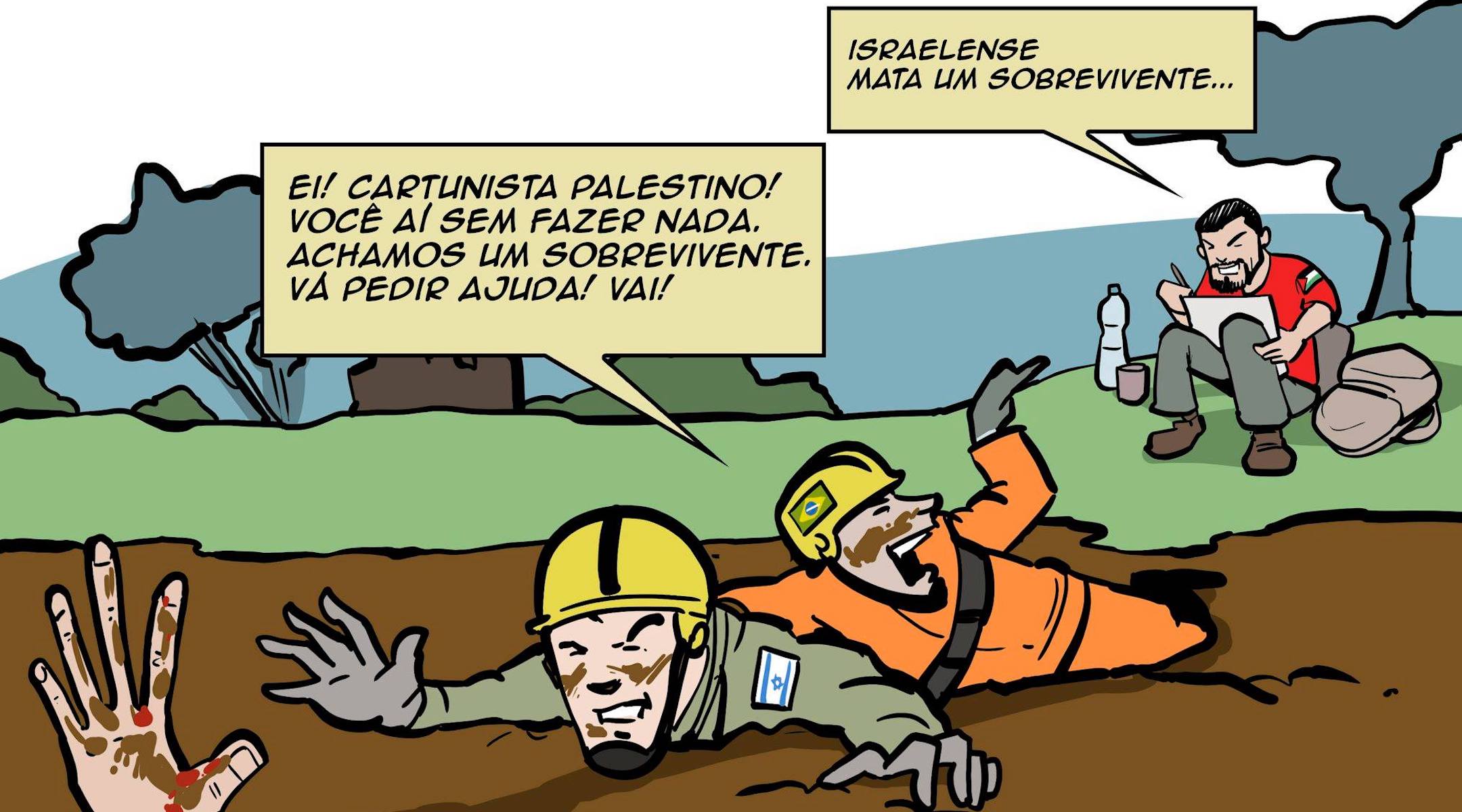 Leandro Spett, a Brazilian Jewish cartoonist, posted a drawing in response to Latuff’s, in which a Palestinian cartoonist sees an Israeli rescuer and writes: “Israeli kills a survivor.” (Leandro Spett)

“This is probably one of the lowest, [most] vile and disgusting cartoons I’ve had the displeasure of seeing in my entire career as an illustrator and cartoonist,” said Spett, referring to Latuff’s drawing. “I think nothing was as low, soulless and devoid of moral compass. There is not a drop of humanity in his work.”

“We will no longer accept anti-Semitism, racism or any other form of aggression against the Jews and Israel,” he added. “No matter how much it hits, we’ll hit it back. The time to lower your head is over.”

“The anti-Zionist media in Brazil tried to disqualify the work of the Israelis in Brumadinho. But the news broadcasters have listened to the Brazilian authorities who are at the scene of the tragedy and everyone was unanimous in acknowledging that the Israeli team is highly qualified in disasters,” Wurman told JTA.

The Israeli humanitarian aid seems to be the first outcome of Netanyahu’s historic five-day visit to Latin America’s largest nation earlier this month, when he met Bolsonaro as a guest of honor. They called each other “brothers” and promised a new era of friendship ties between both countries.