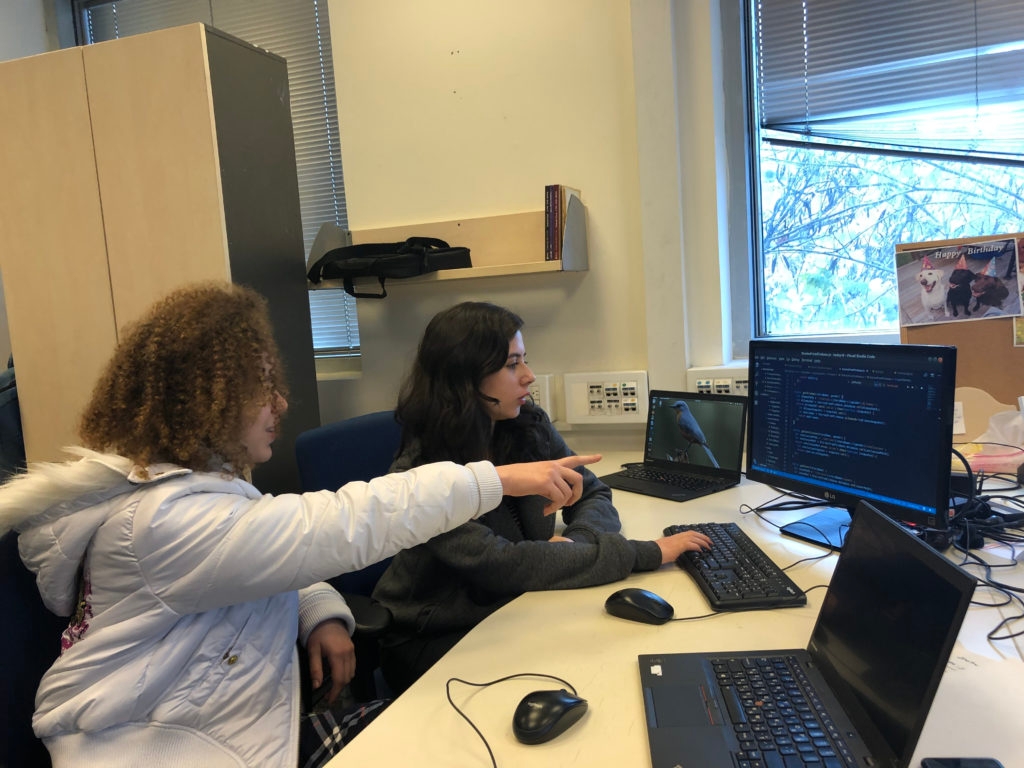 JERUSALEM (JTA) — Sitting side by side in an open office in the tech giant Cisco’s headquarters here, Roni Ashkenazi and Ayelet Ganot sat staring at lines of code on a flat screen monitor checking their work before launching a demo of their latest project — a tablet app they are calling “What Should I Do.”

Designed for autistic children, the interactive app helps them role-play some common scenarios, minimizing the disruption caused by visits to the doctor and other changes to their regular routines that would usually cause a degree of emotional distress.

“They aren’t comfortable with changes and even the slightest change in schedule makes them scared,” Ashkenazi explained, noting research that found that “if a parent or caretaker sits with them before going to an unfamiliar activity and explains step by step what are they going to do, they will have more confidence.”

Israel is home to numerous domestic and international technology firms developing a range of products and services. What makes Ashkenazi and Ganot’s project unique is that both programmers are only 18 years old and their app is being designed pro bono as part of Carmel 6000, a new Israeli national service program intended to “harness the power of tech for social purposes.”

The program is also focusing on women, mostly religious, who take part in Israel’s national civilian service rather than the military. Organizers say the program is also an attempt to narrow the gender gap, which sees women underrepresented as coders, engineers and entrepreneurs.

Carmel 6000 is designed to emulate the Israeli army’s Unit 8200, an elite signals intelligence unit comprised primarily of soldiers younger than 21 that serves as something of an incubator for the country’s future tech gurus and startup founders. The new program is intended to “take the prestige of top intelligence and high-tech units in the IDF and brings the same status to social tech, particularly in the fields of education, welfare and health care.”

Some 30 young people are taking part in Carmel 6000 this year after a limited pilot in 2017 proved successful. Following an intensive six-week programming boot camp, the participants — all but one are religious women — are assigned projects developing applications for nonprofit “clients” and learning with mentors from various tech firms including Cisco, Intel and MobilEye. For two years, the participants will “use existing technologies to help people” such as the elderly, the disabled and other at-risk groups, according to program head Yossi Tsuria, a mathematician and retired high-tech executive.

“I want to turn Israel into a leader of this domain,” Tsuria said. “In the same way that Israel leads in cyber, I want it to lead in social high-tech.”

As part of that, he said, “one of the first missions is to grow leaders who will have this passion to use high-tech for good.”

The students, whom Tsuria described as the top 1 percent of students entering national service instead of the army, are designing products for prominent institutions such as Israel’s Holocaust memorial, Yad Vashem. One app, designed for an organization working with disabled children, featured a digital dreidel that spins as long as you keep a finger on the screen, allowing youngsters lacking the fine motor control to spin a physical top to play the popular Hanukkah game.

“I saw the power of technology to change how people behave and I wanted to use that for good,” Tsuria said.

Sponsored by AMIT, an American Zionist group that runs a network of more than 100 schools across Israel, Carmel 6000 is recruiting heavily from the periphery and has attracted the attention of the Israeli Ministry of Diaspora Affairs, which has put 2 million shekels, or $530,000, into the program.

Some industry partners are looking at the program as a potential recruitment tool, AMIT’s Limor Friedman said, although “we are hoping that some of the girls will choose to develop the concept of social high-tech in Israel and not just for profit.”

Back in the office, which was donated gratis by Cisco for a period of three years, Ashkenazi described her experience, telling JTA that she felt that she had “donated a lot to society and did something meaningful.”

At the next desk, Avital Weisinger stared intently at another screen working on her own project. A 21-year old from Teaneck, New Jersey, she had immigrated to Israel after attending a gap-year seminary program. Weisinger had studied programming while in high school, and when a friend told her about a new technically oriented national service program, she immediately got in touch with the organizers. Weisinger became one of two women to take part in last year’s pilot. Now, in her second year, she is helping mentor some of the participants.

“I’m inspired by these girls who are so incredibly talented and motivated,” she told JTA. “It’s a beautiful thing to get people so ambitious and smart and driven to create something so crucial for this society.”

“We believe that female students that have outstanding scientific and technological skills can help repair the world while developing their skills and abilities,” he said.

“Numerous Israeli social service organizations are thirsty for technological development that will help improve the services provided to people with special needs. Amit Carmel 6000 gives religious girls who chose not to serve in the IDF the opportunity to further develop their technological abilities while bettering Israeli society by helping the most disadvantage amongst us.”