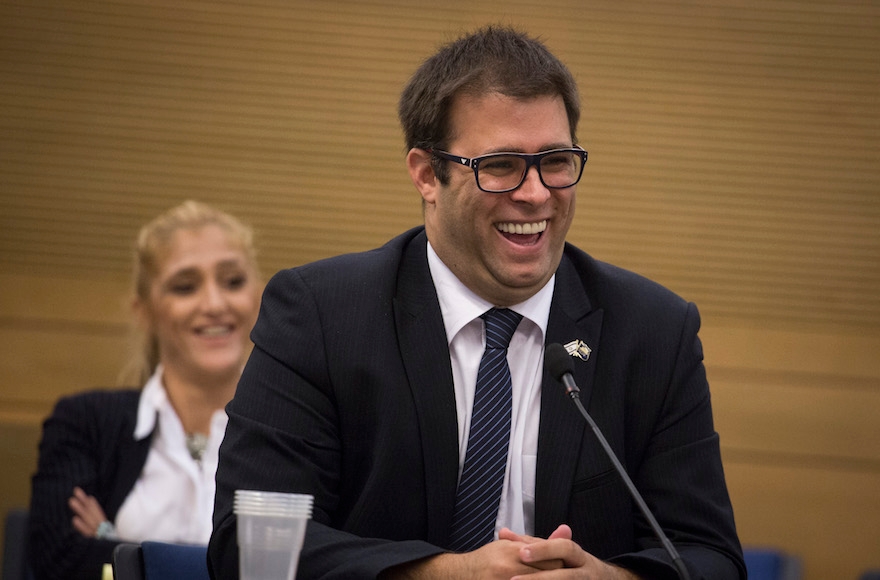 JERUSALEM (JTA) — Likud Party lawmaker Oren Hazan is under fire for calling a disabled fellow lawmaker “half a human” during a Knesset debate.

Ilan Gilon of the opposition Meretz party was criticizing Culture Minister Miri Regev during a heated debate Monday on a bill that would withhold state funding to cultural organizations that show insufficient “loyalty” to the state. Hazan leapt to Regev’s defense and the lawmakers exchanged words.

After Gilon called Hazan “the Golem of Prague” — an anthropomorphic being made of clay and given life — Hazan threatened the disabled lawmaker saying: “If you weren’t half a human, I would respond to you.”

Gilon had polio as a child and frequently uses a wheelchair.

Hazan later apologized for the taunt, saying he was not taking a jab at the lawmaker’s disability.

“My comments referred to his barbaric behavior, and not anything else. If my statements were understood otherwise, it was not my intention. Please accept my apology,” Hazan said.

“In general, children, with or without disabilities, should feel very bad that in the Israeli Knesset there is such a person. It should be clear,” Gilon said Tuesday in an interview with Channel 10. He called the exchange “unimportant matters of an unimportant person playing within the Knesset. I have no more expectations of these people, people from whom I would not buy a used bike.”

Several lawmakers reportedly have filed complaints about Hazan to the Knesset Ethics committee, which has sanctioned him in the past over his taunts and insults of other lawmakers; in January he was prevented from voting in the plenum for six months.

Three years ago, Hazan ridiculed a different disabled lawmaker who was having difficulty voting, and was reprimanded by the prime minister.

Hazan came to wide attention in 2017 after taking a selfie with Donald Trump during a formal welcome ceremony when the U.S. president visited Israel.