Israeli elections bring out ugly politics online and on the street 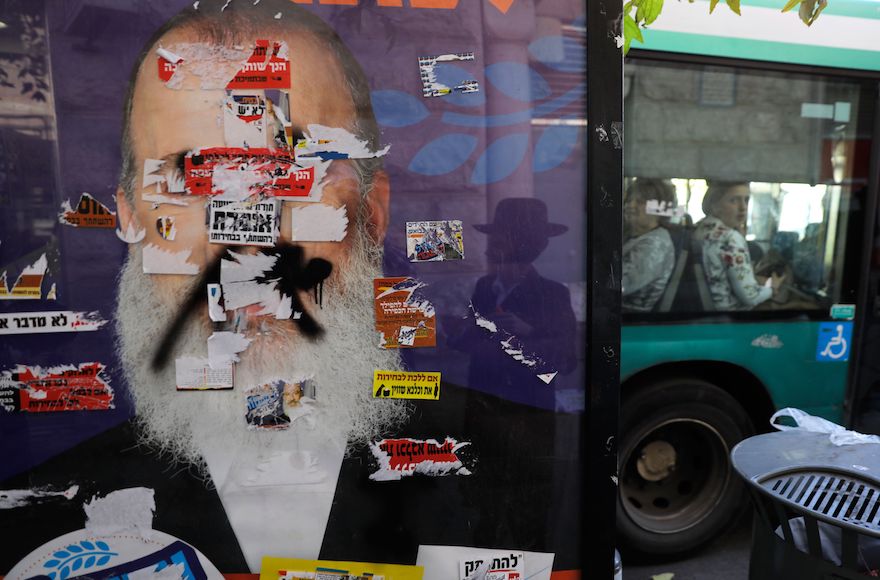 A campaign poster for a Jerusalem candidate is ripped on a billboard ahead of the upcoming municipal elections, Oct. 28, 2018. (Menahem KahanaAFP/Getty Images)

JERUSALEM (JTA) — Municipal elections in Israel on Tuesday capped weeks of campaigning that had a familiar feel for those who lament an abrasive, nationalist and even racist turn in American politics.

In Tel Aviv, the local branch of the ruling Likud party ran campaign posters featuring Israeli and Eritrean flags side by side with the slogan “It’s us or them,” a reference to the significant African migrant population in Israel’s largest city.

Other posters showed the Palestinian flag superimposed over city hall and saying that the only alternative to Likud rule was Islamic rule. While the posters eventually were taken down, a Likud spokesman was quoted by the Times of Israel as saying that the party stood “behind this campaign.”

Meanwhile, in Ramle, advertisements belonging to the national-religious Jewish Home party portrayed a girl in Islamic garb warning Jews that “tomorrow this could be your daughter … Only a strong Jewish Home will preserve a Jewish Ramle.”

Experts are warning that coarse political rhetoric in Israel is increasingly finding a home online, too.

According to the National Cyber Directorate, thousands of fake Facebook profiles — an unspecified number created by unnamed Israeli political parties — were taken offline recently in an effort to combat the spread of propaganda ahead of the vote. Experts like the Israel Democracy Institute’s Tehilla Shwartz Altshuler believe that a lack of regulation has contributed to the degrading of the online political discourse.

Altshuler, who conducts research on the friction between technology and democracy, recalled a television ad produced by the haredi Orthodox Shas party during the last Knesset elections warning of intermarriage between Russian speakers and other Israelis. Eventually the ad was banned by the country’s General Elections Committee because it was racist and inflammatory.

Such regulation is present on the national level but sorely lacking for municipal contests, she said, describing most local races as “a Wild West.”

“You can see it [manifested in terms] of racism, as well as fake accounts on social media and hate speech against nominees and lies and semi-automatic bots,” Altshuler said. “And since there are not enough rules and regulations, I would say that the public sphere has become more extreme.”

And while Altshuler does not believe Israeli society has become markedly more racist overall, she says the move toward digital campaigning has allowed candidates to pander to the worst impulses of their constituents.

“Many nominees are using social media management firms, and with the lack of regulations they allow themselves to use any technique they want,” she said. “Some smell very fishy and [violate] the terms of service of the platforms” by using “fake accounts or pretending you are one of your competitors.”

In an investigation published in August, Israel’s Channel 2 reported the existence of “hundreds or thousands of accounts that are suspected of being fictitious and that serve political goals — of the major parties.” They were aimed at municipal races in towns like Herzliya, Nahariya, Haifa, Tiberias, Yavne, Qiryat Motzkin and Hod Hasharon.

In a separate report released at about the same time, the Hebrew daily Yediot Acharanot found evidence of political actors using fake accounts and pretending to be competitors online.

In 2015, in an early example of divisive cyber campaigning, Prime Minister Benjamin Netanyahu sent out targeted text messages warning his supporters that “the right-wing government is in danger. Arab voters are going en masse to the polls. Left-wing NGOs are bringing them on buses.”

Altshuler said the Netanyahu campaign “didn’t do it through traditional media because they didn’t want the criticism. That was a primitive example of what targeting could look like and how effective it could be.

“In this municipal election and in the next general election, we will see much more effective targeted campaigns, Cambridge Analytica-style,” she said, referring to the British firm that allegedly used data from tens of millions of Facebook accounts to profile voters in support of Donald Trump’s 2016 presidential campaign.

Micky Gitzin, director of the New Israel Fund in Israel, which funds progressive causes, says his group has been turned into a “scapegoat” by those  claiming that “the NIF supports Hamas and terrorists, and they support such-and-such a candidate.”

“It’s so surreal,” he said. “This strategy is based on what Netanyahu did with the Arabs during the last elections. That’s the strategy that got people really fired up in the national elections and all the campaigners are trying to imitate it now.”

Gitzin says not much is being done against it.

“One of the most important things to do is to call it out and to say that fake news will be part of the next elections,” he said. “This kind of rhetoric breaks society and creates a high level of mistrust and hatred. It takes a long time to come back and believe we can come together and live and work together despite disagreements. When this time is over, we need to leave ourselves quiet time for recovering and rebuilding society.”

Echoing Netanyahu’s 2015 texts, the Jewish Home party was reported to have recently sent targeted texts to voters in Haifa, warning of an Arab “takeover” of the city.

It’s not just the left that is targeted by online venom.

In June, Yair Lapid of the centrist Yesh Atid party was attacked on seemingly grassroots Facebook pages that showed signs of orchestrated funding. The Labor Party later admitted it hired a company to create the pages.

The party was unapologetic.

“We are trying to reach new audiences, especially a young audience that consumes digital media,” it said in response, according to Haaretz. “It goes without saying that everything was done according to the law, and was reported and overseen as required.”

Despite the noise surrounding trolling and racism in Israeli politics, Jeremy Saltan, a pollster who heads Jewish Home’s English-speaking division, believes that the problem may be overstated.
“If you look at the proportion of the thousands of local lists running… the problematic ones are really a drop in the bucket,” he said. “A general rule is you go negative when you are losing and are desperate. That is not something you do when you are ahead and meeting your objective.”
As for the worst examples of vicious campaigning, “It is not as widespread as you might expect, because every time there is a specific incident it does end up in the media and we can still count these incidents on our fingers.”

The post Israeli elections bring out ugly politics online and on the street appeared first on Jewish Telegraphic Agency.