Israeli archaeologists say they found the ring of Jesus’ killer 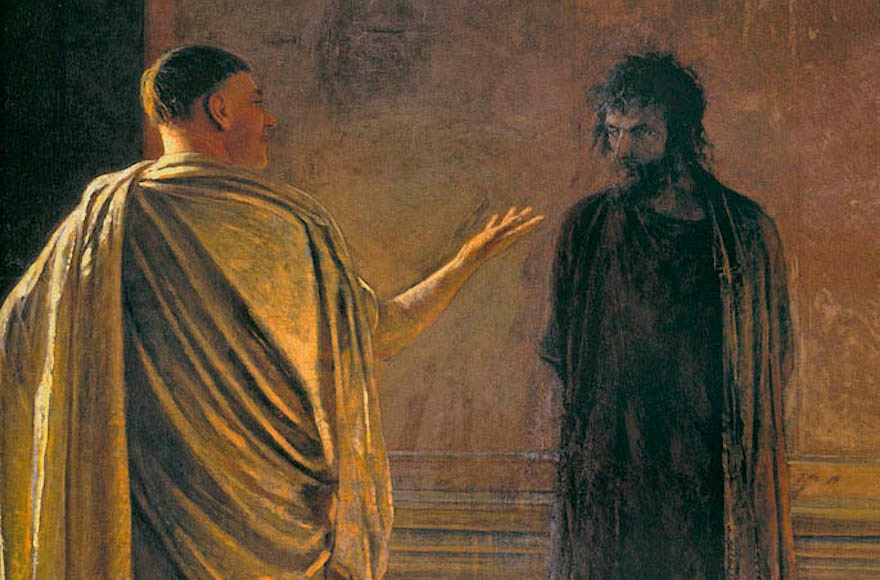 A painting of Pontius Pilate and Jesus. (Nikolai Ge/Wikimedia Commons)

(JTA) — Israeli researchers say they have found a ring that belonged to Pontius Pilate, the Roman prefect who had Jesus crucified.

The copper alloy jewelry was one of the artifacts found during a 1968-69 dig unearthing a section of a tomb and palace belonging to the biblical King Herod near Bethlehem in the West Bank, The Times of Israel reported Thursday. But the ring was examined and cataloged only this year, the report said.

Pilate, a historical figure who has captivated the imagination of some of the 20th century’s most-celebrated authors, including James Joyce and Mikhail Bulgakov, ruled the province of Judaea from around 26-36 A.D.

“We have a ring inscribed with the name Pilate and the personal connection just cries out,” Roi Porat, the archaeologist who ordered the ring’s re-examination, told The Times of Israel.

The jewelry was found in a room dating to no later than 71 A.D. alongside a selection of glass, ostraca, pottery and decorated mud stoppers. Also present were a large number of metal artifacts including iron arrowheads, coins and a copper alloy sealing ring.

The ring is engraved with a large wine vessel — known as a krater — surrounded by tiny Greek letters spelling out “of Pilatus.” Some of the letters on the ring are deformed, the researchers said, likely due to improper production.