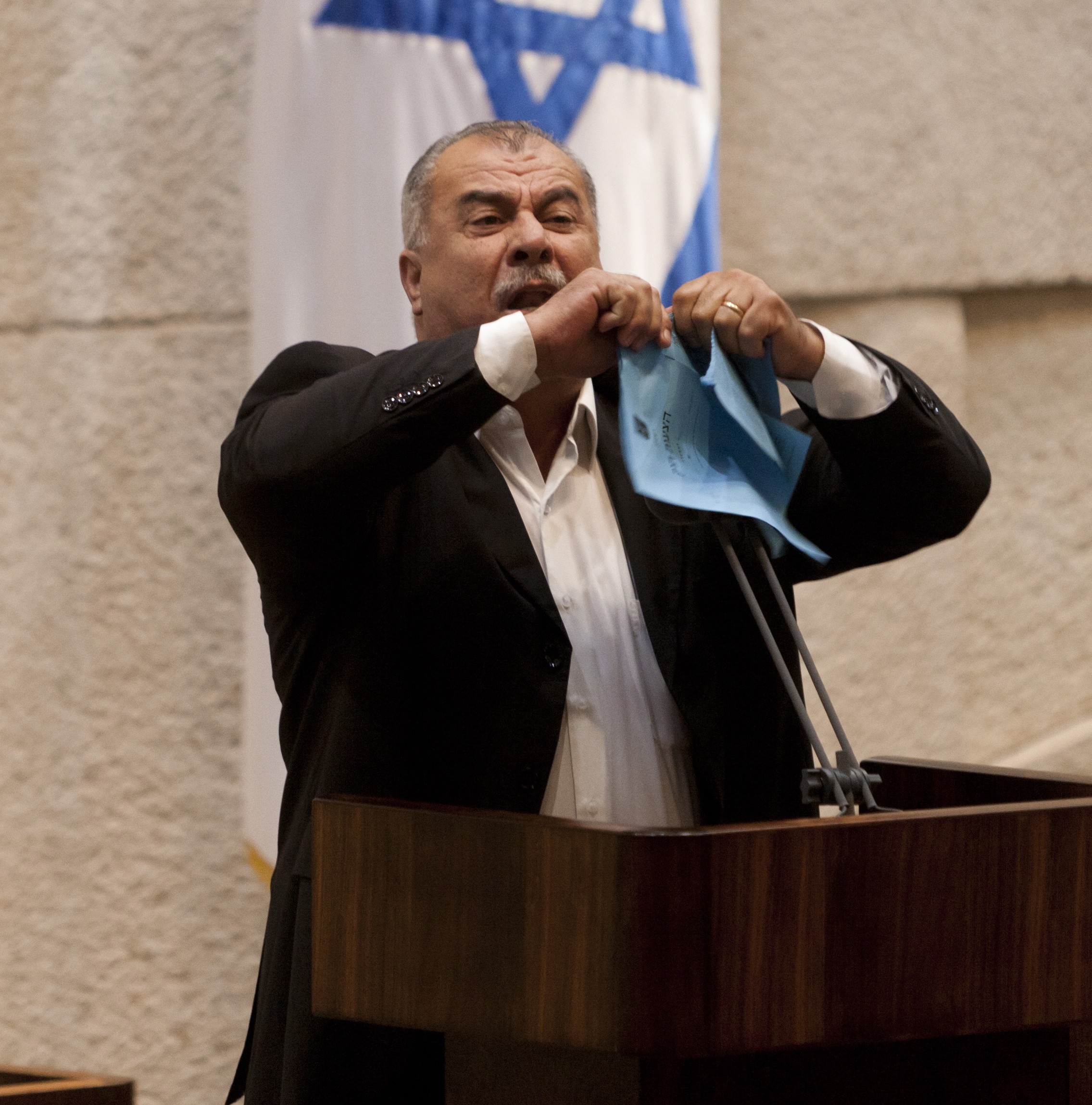 Mohammad Barakeh, who served in the Knesset for 16 years, speaking in the Israeli parliament on June 24, 2013. (Flash90)

JERUSALEM (JTA) — Israeli Arabs have proposed to establish an International Israel Apartheid Day, to be held every year on July 19 in commemoration of the passage of Israel’s controversial nation-state law, which states that only Jews have the right to self-determination in the land of Israel.

“That is the day of the apartheid law being passed, which makes Israeli Arabs second-class citizens,” former Knesset member Mohammad Barakeh told the Jerusalem Post. Barakeh is the head of the Higher Arab Monitoring Committee, an umbrella group representing Israeli-Arab civil society organizations.

Barakeh, who served in the Knesset for 16 years, was adamant that Israel was a racist state. He told the Post that “our defining it as apartheid is based on a study that found our situation similar to apartheid in South Africa and the American South before the Civil War. It’s not a political decision but a fact.”

Barakeh will seek to bring the Palestinian Authority on board during a meeting slated for early next month. A spokesman for the committee told the Post that the organizers of International Israel Apartheid Day could “learn from what has been done successfully by BDS activists on North American college campuses and implement their ideas.”

Many campuses around the world already hold annual Israel Apartheid Week events. Those events rarely distinguish between Arab citizens of Israel and Palestinians living under Israeli control in the West Bank.

Tens of thousands of Israeli Arabs, some waving Palestinian flags, attended a protest organized by the Higher Arab Monitoring Committee in Tel Aviv’s Rabin Square on Saturday, Aug. 11. Speakers at the rally railed against what they described as a law that formalized a racial hierarchy among Israeli citizens in which Arabs enjoyed a diminished legal status compared to Jews. Some protesters waved Palestinian flags.

Prime Minister Benjamin Netanyahu held up the flags as an example of why the law was needed in the first place, saying that “many of the demonstrators want to abrogate the Law of Return, cancel the national anthem, fold up our flag and cancel Israel as the national state of the Jewish people.”

On its page of frequently asked questions, Israel’s Ministry of Foreign Affairs rejects the apartheid charge.

“Like most other Western democracies with a sizeable minority population, Israel still has a great deal to do before absolute equality can be achieved,” the page reads. “However, the disparity between the situation of Arab-Israelis and the situation that existed in South Africa is so vast that no legitimate comparison can be made.”

The page notes that “Arab Israelis can vote,  live where they want, receive excellent medical care and practice whatever profession they” choose. It also notes that Arab Israelis serve on the Supreme Court, in the Knesset, in diplomatic positions, and “in almost every sphere of Israeli life.”