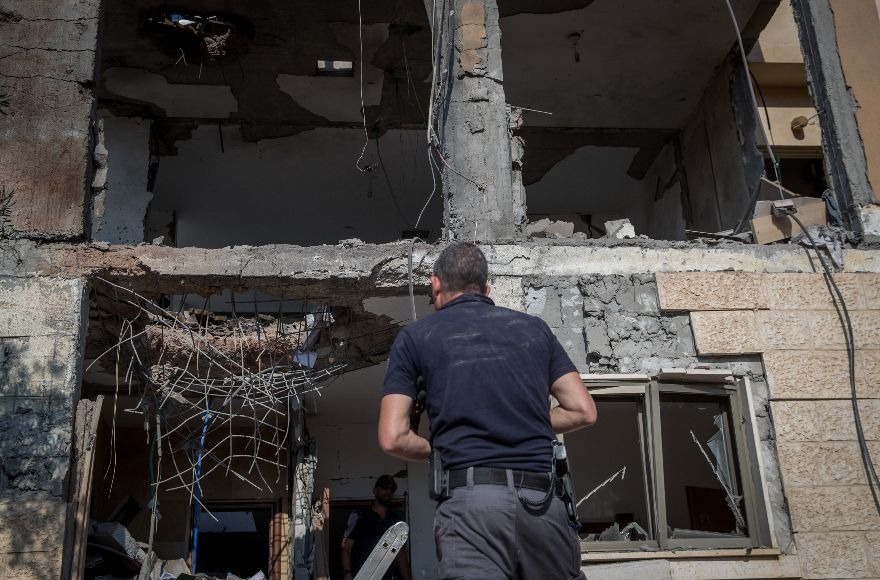 Israeli security forces survey a home hit by a rocket fired from the Gaza Strip in the southern Israeli city of Beersheba on Oct. 17, 2018. (Yonatan Sindel/Flash90)

JERUSALEM (JTA) — A rocket fired last week from Gaza that leveled a home in the southern Israeli city of Beersheba was fired due to a malfunction caused by a lightning storm.

Ynet reported Tuesday that Israel’s Security Cabinet decided against launching a military operation in Gaza after Israeli intelligence determined that the rockets were fired accidentally.

“We acted very responsibly,” an unnamed government minister told Ynet. “It wasn’t right to go to war because of the weather.”

The minister also said that there was indication that Hamas and Islamic Jihad were embarrassed by the incident and even exchanged accusations before realizing the rocket launches were the result of a malfunction.

Israel did retaliate for the rockets strikes hours after they occurred, striking 20 Hamas military targets shortly after the early Wednesday morning attack. The Security Cabinet did not meet about the rockets until later in the day, on Wednesday evening.

The single mother of three who lived in the house got her children in a protected safe room a moment before the rocket landed.