Israel has a racism problem. Here are 3 ways to help fix it.

(JTA) — I am Ethiopian and I am Jewish. I am proud of my Ethiopian heritage as well as my Jewish heritage, but I feel that my cultures are not proud of me. Ethiopia rejected its Jews, and now Ethiopian Jews struggle to fit in with the native Israeli population. We need to figure out how to break the systemic oppression that forces Ethiopians to fight to survive.

It is a tough pill to swallow to admit that your country has a race problem, but Israel certainly has one. Damas Padaka, a decorated Israeli soldier, was confronted and beaten by police unprompted while on leave from active duty. Rabbi Eliyahu Asulin, a mohel, instructed his students to practice circumcision on Ethiopian babies despite not completing their training “because that’s where you learn. They’re cannon fodder.”

And last Friday, Yehuda Biadga, who suffers from mental illness as a result of PTSD from his army service, was holding a knife and his family called the police so that he would not hurt himself or anyone else. But instead of defusing the situation, the police killed him.

Many would be quick to credit these incidents to coincidence, but numbers do not lie. According to police reports, violent acts against Ethiopians committed by police doubled from 6 percent to 12 percent of total acts from 2007 to 2015. The following three years of statistics are being withheld, but the trend continues through firsthand accounts and reports that continue to make headlines.

Immediately after Yehuda Biadga’s shivah, an estimated 20,000 people took to the streets of Tel Aviv in a peaceful demonstration. Not only Ethiopians but people of all races were sounding the alarm on a pattern of discrimination with chants and signs such as “Racism? Not in my country.”  At the conclusion of the protest, police blocked the entrance to a train station, causing minor scuffles in an otherwise successful and peaceful demonstration.

The Ethiopian Jewish community, not just in Israel but all over the world, has again been awakened. We are outraged. These events are a continuation of years of oppression.

Minorities all over the world have been systematically pushed down by society, and a byproduct of this oppression has led to the stigma that minorities are dangerous. In response, police are pulling the trigger sooner than they would against those who are white.

As these protests get louder and my fellow Ethiopians take to the streets, we must come together and address this problem directly. Thankfully there are several concrete steps that can and should be taken in order to start doing so.

First, police must learn to interact with the Ethiopian Israeli population in a more positive and proactive way, and should implement training and discipline for those who do not follow proper protocol.

Second, Ethiopian Israeli history and culture, especially their amazing story of aliyah (immigration to Israel), should be taught in schools at a young age, so that the next generation of citizens can be more inclusive. Education is the best way to combat injustice, and teaching our collective history would be an important step.

And finally, Ethiopians need to be more integrated into Israeli society and involved in the organizations that aim to find solutions. Arrest records of those who have not committed a crime should be expunged, as it limits their ability to find jobs and integrate into society.

I fear for my family, myself and my friends. Morally, I cannot justify sitting idly by as my brothers and sisters fall victim to oppression; nor should the rest of the world. We are all brothers and sisters, and any abuse of power by police or any form of systemic racism should ignite outrage and reaction from everybody. Just because you do not have black skin does not mean you cannot take a stand.

Let us be an example to the world. In a time where new problems ignite faster than existing ones are extinguished, where minorities all over the world are oppressed, let us give the world something to admire and, just maybe, be able to leave our children a better place to live. 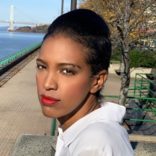 is an Ethiopian Israeli living in New York. She is co-chair of the Hospitality Committee and member of the Jewish Women’s Foundation of New York. She is from Beit Shean and studied at Ariel University in the West Bank.
The views and opinions expressed in this article are those of the author and do not necessarily reflect the views of JTA or its parent company, 70 Faces Media.