Israel has a bobsled team, and it wants to compete in the Olympics 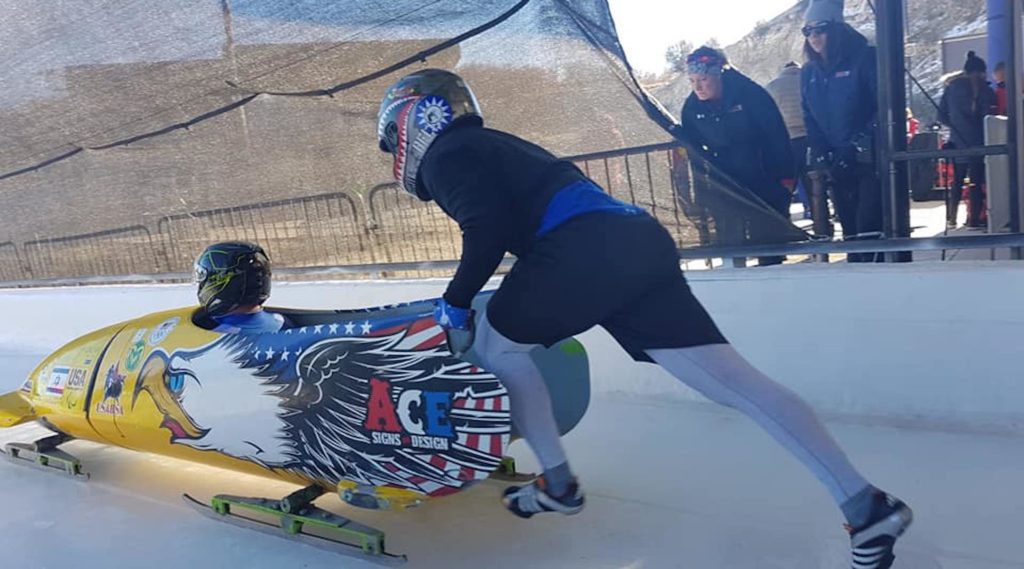 NEW YORK (JTA) — In the span of just a couple days, Chaim Raice went from never having been on a bobsled to being a contender to represent Israel in the 2022 Winter Olympics. And it all started with a Facebook post.

Raice, a house builder based in Pomona, New York, was browsing the social media site in November when he saw a post saying that the Israeli bobsled team was in need of another athlete to compete in the North American Cup beginning that month.

He thought it was a joke, but he still reached out. Though Raice, 46, had little knowledge of bobsled, he had participated in several other sports as an amateur, and his Israeli citizenship meant he qualified to compete for the country.

It turned out to be a perfect match, and just two days after having reached out, Raice was driving up to Lake Placid to compete.

“I was kind of shocked that it actually worked out,” he told JTA last week.

Raice had been told that he would be teaming with an athlete whose partner had dropped out due to scheduling conflicts. The other competitor would be serving as the pilot, sitting at the front of the racing sled and steering, while Raice would serve as the brakeman, pulling a lever to get the go-kart-like sleigh to slow down after crossing the finish line.

What he didn’t know was that his partner, Dave Nicholls, uses a wheelchair to get around. Though Nicholls, who sustained spinal damage in a skiing accident 15 years ago, had been participating in the sport for 14 years, this was the first time the disabled athlete was taking part in a competition for able-bodied people (rather than a para-athlete competition).

“I was a little shocked,” Raice said about finding out about Nicholl’s status.

The rules of bobsled, which has two- and four-person teams, actually make competing for wheelchair users less of a challenge than in most other sports. Team members typically push the sled and then jump in before going down the track, but the rules allow an athlete to start seated and the other team members to push — less of a disadvantage in the four-person sled than in pairs.

Raice arrived in Lake Placid on Nov. 29, just a day before the two-day competition. He and Nicholls, who is in his 50s and based in Park City, Utah, were able to practice on the racetrack twice before the big day.

Prior to the first day’s run, Nicholls made what he calls “a rookie mistake”: He loosened his helmet strap, causing it to slide down over his eyes and block his line of vision on the track. With Nicholls not able to steer properly, the sled flipped on its side. He broke several fingers, and the team could not complete the race.

However, it didn’t stop the pair from competing the following day. They finished in 11th place, ahead of two teams that were unable to complete the race. But Nicholls will still participate in additional races as he tries to qualify for the World Cup, a prerequisite for the Olympics.

With seven athletes, the Israeli bobsled and skeleton team has a record number of members. Though the team is based in the United States, all the athletes have Israeli citizenship — some from birth, others from making aliyah to compete for the country.

Earlier this year, an Israeli sledder competed for the first time in the Olympics, with American-Israeli A.J. Edelman representing the country in one-person men’s skeleton. David Greaves, who leads the team as head of the Israeli Bobsleigh and Skeleton Federation, hopes that in 2022, the team will not only compete in men’s skeleton but in the women’s race and bobsled.

“There are a lot of small countries that are involved in these sports who struggle every year to find athletes to compete,” said Greaves, who is based in Winnipeg, Canada. “And we have done something in terms of growing our program that most small nations have not been able to do successfully.”

Raice said that competing for the first time was “way more bone jarring and exhausting than I ever imagined.”

“You think you’re getting into a sled and slide down,” he said, “but it’s a really fast track and the G-forces are unreal. You feel like you almost get blackout on some of the curves.”

Still, he said he has become “slightly addicted” to the sport and hopes to continue with the goal of participating in the Olympics together with Nicholls. For his part, Nicholls says that representing the Jewish state holds a special significance.

“I’m wearing the Star of David when I compete,” he said. “I’m wearing on my left hand a blue and white glove, and on my right hand a USA red, white and blue glove. People know now that I’m Team Israel, and it’s great to hear that over the loudspeaker when they’re announcing the different drivers and the different countries.”