Israel ‘almost touched’ peace: A director’s take on the making of HBO’s ‘The Oslo Diaries’ 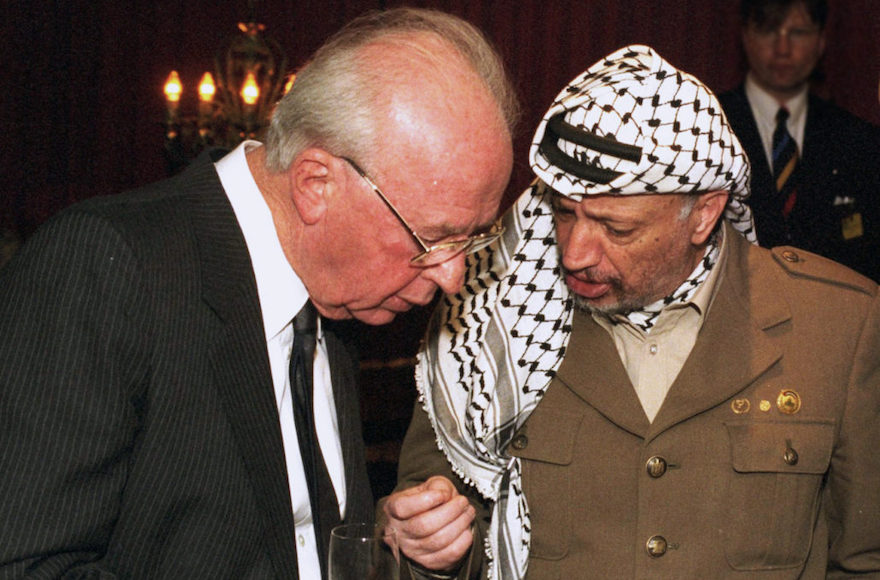 A scene from “The Oslo Diaries” showing Yitzhak Rabin and Yasser Arafat after they were awarded the Nobel Peace Prize in the Norwegian capital. (Saar Yaacov)

(JTA) — On Sept. 13, 1993, exactly 25 years ago, Israeli Prime Minister Yitzhak Rabin and PLO Chairman Yasser Arafat were captured shaking hands in a historic ceremony in Washington, D.C., hosted by President Bill Clinton. The leaders agreed to set up a framework, now known as Oslo Accord I, that would lead to the resolution of the Israeli-Palestinian conflict.

But that photograph was just the culmination of a series of secret negotiations held in Norway over several months. And Israeli-Palestinian peace talks would continue for years after “The Handshake,” as the fateful 1993 moment is sometimes called.

“The Oslo Diaries,” a documentary that covers four years in the life of this process — starting in 1992, immediately following the 1991 Madrid Conference, and ending with the election of Benjamin Netanyahu to his first term as Israeli prime minister in 1996 — is set to air on HBO beginning Sept. 13. The film had premiered at the Sundance Film Festival in January and made a subsequent run on the Jewish film festival circuit. (It will air on Israeli TV as well.)

Through interviews, archival footage, reenactments and a surprising number of negotiators’ diary pages, the film, directed by the Israeli duo of Mor Loushy and Daniel Sivan, gets perspectives from many of the Oslo Accords’ surviving participants from both the Israeli and Palestinian sides. Former Israeli leader Shimon Peres gives his final interview before his death in September 2016.

The filmmakers had previously made “Censored Voices,” a 2015 documentary about Israeli soldiers sharing their surprising reflections about the Six-Day War in 1967. After that film, Loushy and Sivan thought, “there are so many films about war that it was natural for us to ask the question: ‘Why do we not have peace?’ So we started to look for it.”

“Nobody really understands what was signed there and what happened there, and people see it as this big failure,” Loushy said about the Oslo process. “We found that [both sides] were really close [to peace], and that we almost touched it.”

The duo found a diary belonging to the late Ron Pundak, the Israeli journalist and historian who was among the initial architects of the Oslo process, and decided “this is the story.”

“I can only write my own private memories of these three years of hope and anguish,” Pundak, who died in 2014, had written in his diary. “Is this a tale of triumph, or defeat?”

That discovery led the filmmakers to speak with several negotiators and diplomats from the Oslo period, on both sides of the table. Those interviewed include Uri Savir, Yossi Beilin and Joel Singer from the Israeli side; Hanan Ashrawi, Nabil Shaath and Ahmed Qurei from the Palestinian negotiating team; and American negotiator Dennis Ross.

“We just approached everyone, and I think that everyone was eager to tell their story,” Loushy said. “They were kind of wiped from the history … and both of the sides really loved the film.”

At one particularly humorous point Singer recalls being greeted with a kiss, early in the talks, by Qurei, also known as Abu Ala.

“A terrorist is kissing me,” the Israeli recalls thinking. “Men don’t kiss one another in the United States or Israel.”

But trust would gradually be built between the two groups of diplomats.

Quite a lot of history transpired over the four years covered in the film: the secret talks between the sides in Norway, the handshake between Rabin and Arafat on the White House lawn, the subsequent interim agreements and the assassination of Rabin in November 1995.

History happened during the filmmaking process, too: Peres spoke to the filmmakers only days before his passing.

“In war there are no victories,” the former Israeli prime minister and president says in the film. “No war is ever finished, unless it’s being replaced by peace.”

“He was still very sharp,” Loushy said of Peres. “And I feel that it was a great interview — we could really see his heart, and he really talked and opened up to us.”

The film also features segments from Peres’ diary. In one entry, he wrote that in their 50-year friendship, Peres had never seen Rabin so happy as he was when he addressed a peace rally on the evening of his assassination.

The years since the film left off have not been especially kind to the idea of peace in the region. But the subjects of the film have remained optimistic — and Loushy has, too.

“Most of our speakers — I think that most of the people from both sides — don’t believe that there is another alternative, or option, other than a two-state solution. It’s only a matter of how much blood will be spilled until then,” Loushy said. “How many wars in Gaza? How many people dying?

“I cannot afford myself to be pessimistic. I don’t want my children to be in the circle of blood and wars.”

The post Israel ‘almost touched’ peace: A director’s take on the making of HBO’s ‘The Oslo Diaries’ appeared first on Jewish Telegraphic Agency.