In ‘To Dust,’ a Hasidic cantor and a biology teacher played by Matthew Broderick are quite the odd couple

(JTA) — A Hasidic cantor and a jaded community college biology teacher don’t seem like two individuals who would be fast friends.

In “To Dust,” the debut film from director Shawn Snyder, they make a hilarious team.

The odd couple plot is not all lighthearted though. For Snyder, 37, how to deal with the loss of a loved one is the core of the film.

“I watched my mom lose her mom about five years before I lost my own mom,” Snyder said in a telephone interview. He recalls seeing “the value she [his mother] found in mourning in the Jewish way.”

When his mother died, he also found comfort in Jewish tradition, but yearned for more. For a year he accompanied his father once or twice a week to say the Kaddish prayer for her and found the ritual “incredibly wise” — but somehow insufficient for his emotional needs.

A similar crisis faces the film’s main protagonist, Shmuel, the cantor, following the death of his wife, Rivkah. Shmuel has done everything Judaism requires of him: He’s rended his coat, sat shiva, observed shloshim (the 30-day mourning period). But none of it makes him whole.

Behind his angst is a dictum from Ecclesiastes: “Then the dust will return to the earth as it was and the spirit unto God who gave it.”

He feels the latter cannot occur until the former is complete — and has no idea how long that takes. Only when her body has completely decomposed and her soul risen, he feels, can he cease worrying about her.

To get answers his rabbi can’t provide, the cantor commits haredi blasphemy — he turns to science.

By chance, he winds up consulting Albert, the biology teacher and nebbish who wears his divorced wife’s bathrobe around the house. Albert reluctantly teaches reluctant students in a dead-end job where no one respects him, so he reluctantly joins in Shmuel’s search for answers.

In the role, Matthew Broderick ably reprises his bumbling, get-along schtick that has become a staple of his acting resume. Shmuel is portrayed by Geza Rohrig, a Modern Orthodox Jew best known for starring in the Hungarian film “Son of Saul,” which won the Oscar for best foreign language film.

Rohrig makes plausible the wide shifts in mood from absurdist comedy (to study the process of bodily decay, they steal and suffocate a pig) to painful moments (for instance, when Shmuel’s young children can’t figure out what’s wrong with their father). 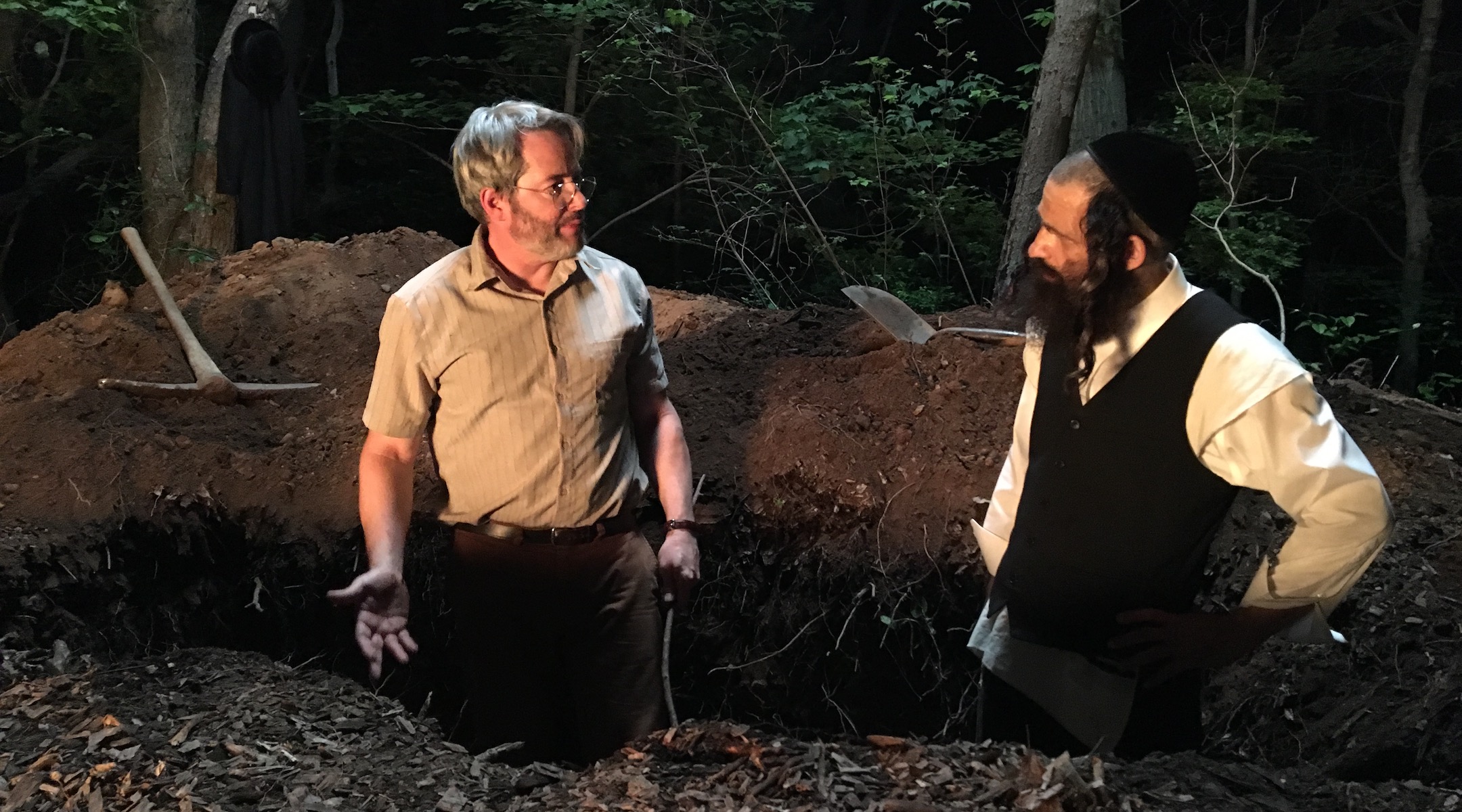 Broderick plays a biology teacher and Rohrig a Hasidic Jew who seeks advice after the death of his wife. (All About the 360, Inc.)

It makes for a film of intriguing contrasts: religion and science, humor and sadness. And it’s all handled with grace and aplomb in an impressive debut for Snyder, who followed the old adage “write what you know.”

“I am Shmuel and my writing partner [Jason Begue] is Albert,” he said. This is an exaggeration — Snyder isn’t haredi — but he was well versed in Jewish practice and tradition.

Snyder grew up in South Florida, attended a Jewish elementary day school, was a bar mitzvah and then was confirmed. He also majored in religion at Harvard. Having grown up in “a strong Jewish community, a bubble almost,” he suddenly found himself “studying at a liberal arts institution in a pluralistic department.” Not surprisingly, his Judaism waxed and waned.

The waning was in part spurred by his mom’s death, and he felt the Jewish strictures of mourning were restricting. Snyder had an extraordinarily close relationship with his mother, and mourning didn’t end in seven-, 30- or 365-day periods.

In his research, Snyder found kabbalistic suggestions that support the Ecclesiastes dictum. It maintains that decomposition purifies the soul, which lingers over the physical remains, sometimes painfully so, until the process is completed.

“I never felt comfortable at my mother’s grave. I never felt I was communing with her there,” he said.

Snyder prefers to remember his mother as she lived, the woman who refused to allow him to cancel a trip to Australia when she was first diagnosed with cancer.

“The thing I carry and cherish about Judaism is this intense humanism, the idea of discussion, of questioning, the idea of two Jews and three opinions,” Snyder said. “And for me art is a form of religious engagement.”

It is through the art of filmmaking that Snyder further engaged his grief: The film is dedicated to his mother. He is constantly reminded of her when he looks at his 4-year-old daughter.

“I see my mom in her,” he said. “And it’s amazing how the tradition and culture come rushing back through her.”