In this Belgian city, a heatwave puts cherished Rosh Hashanah tradition on ice 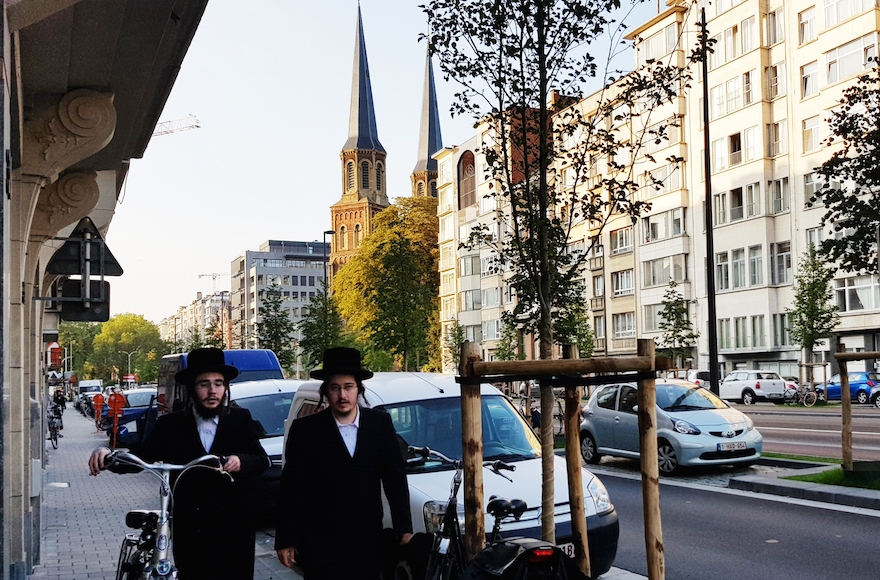 ANTWERP, Belgium (JTA) — Come autumn, hundreds of men and their children stream out of the dozens of synagogues of this Belgian city’s Jewish quarter, and walk quietly to its main park.

When they reach City Park, they gather around its vast pond and perform an ancient ritual called tashlich, the symbolic casting of breadcrumbs onto a body of water. Performed on Rosh Hashanah, the Jewish new year, it represents the shedding of sins and the turning of a new leaf.

As the men perform the ritual, children excitedly wait for the fishes and ducks that rush over for a piece of the action.

Whereas tashlich can be performed pretty much anywhere — including, in a pinch, a fish bowl — it has a special place in Antwerp as a cherished social activity uniting this city’s small and insular haredi Orthodox community.

Which is why many here lament the fact that a dry summer and some construction have left City Park’s pond completely dry, suspending indefinitely one of the city’s defining Jewish moments.

“It’s definitely a loss, especially for my wife and kids,” Ahron Spencer, a 42-year-old father of eight, told JTA last week. He stood outside one of the many small synagogues that dot Diamant, a triangle comprising about 15 streets that is the beating heart of Jewish Antwerp. Its very name is a references to the diamond trade that Jews used to dominate here.

“You can do tashlich alone just like you can pray alone, but it’s more respectful to God when we do it united as a community,” Spencer said.

Spencer moved to Antwerp 12 years ago from his native London. He is part of a growing community of haredim from that city who are settling in Antwerp because life here is far cheaper than in the United Kingdom.

With 14 Jewish schools, Antwerp is arguably the only place in continental Europe where the amenities enjoyed by the local haredi population match those of London, New York or Jerusalem. Diamant has dozens of kosher shops, each carrying products with the kosher certificates recognized by the range of strict sects, such as Satmar.

The city also has several kosher restaurants, although they are popular mostly with visitors and the Modern Orthodox contingent of the community.

This unique status makes Antwerp’s haredi community one of the world’s most international. Yiddish, English, Hebrew, Dutch and French are universally spoken here because they are all taught extensively at Antwerp’s Jewish schools. (Famously, high school students here have their own bizarre dialect that is unintelligible to Jews in the federal capital of Brussels, 40 miles away — it’s a linguistic vichyssoise featuring all those languages.)

Municipal authorities in Antwerp, where some 20,000 Jews live and vote, are not indifferent to the locals’ attachment to their tashlich ceremony. Several plans have been discussed, including replenishing some of the pond, which, the Lema’an Teda newspaper reported this month, the city had agreed to do. Ultimately, though, refilling it was deemed too ambitious in a time of drought, said Pinchas Kornfeld, a rabbi and leader of the local Machzikei Hadass congregation. Residents have been instructed for the first time in decades to reduce water consumption. 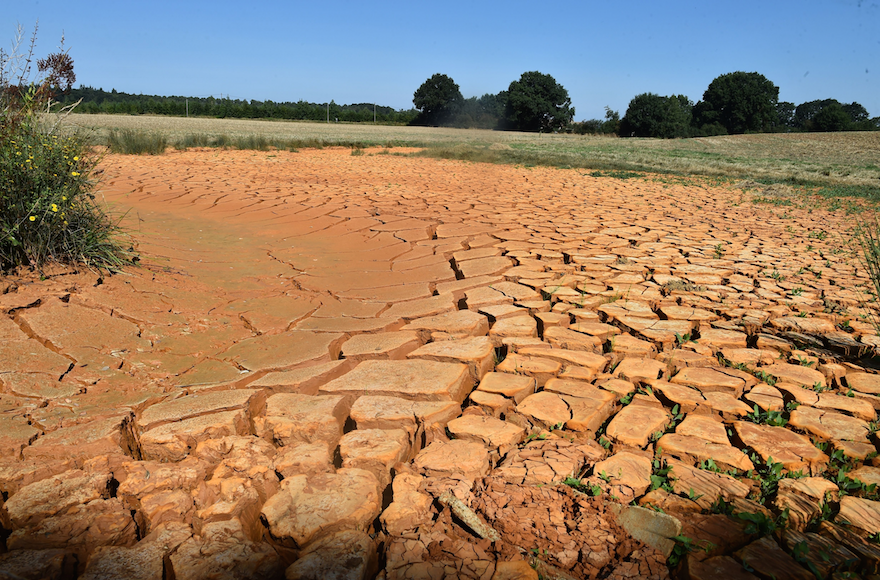 Europe has been hit with a heatwave this summer that has brought unusual 100-degree temperatures. Here is a dried up tributary of a river in Louplande, in north-western France. (Jean-Francois Monier/AFP/Getty Images)

The solution will probably be municipal approval for placing water tanks in the park or elsewhere. It’s an amenity employed regularly by several synagogues in Antwerp, whose Jewish community is a rich mosaic of haredi dynasties, including Hasidic movements, Modern Orthodox congregations and Litvaks — non-Hasidic haredim with roots in Lithuania.

In the late sunsets of Elul, the Hebrew month that falls in August, the streets around all of those synagogues echo with the sound of the shofar, the hollowed horn of a ram that Jews blow ahead of Yom Kippur, the day of atonement that follows Rosh Hashanah. The sound adds to the cacophony around City Park, where haredi children scamper about on scooters alongside picnicking students and Arab teenagers.

“I think it’s a good solution,” Michael Freilich, editor-in-chief of the Antwerp-based Joods Actueel Jewish newspaper, said of the water tanks plan. “When the city just lost one of its most popular ponds, when there country’s nearer to a water shortage than it’s been in ages, it’s not a good message if that pond is filled for the needs of the Jewish community.

“Like the rest of Antwerp’s population, we will also make do without the pond and hopefully it will be refilled before long.”

Despite the drought, Antwerp still does have large bodies of water within walking distance of the Jewish quarter. The Schelte River, for example, is about one mile away.

But in a country where four people were killed at a Jewish museum in 2014, allegedly by an Islamist, “it would be for security reasons unadvisable for large groups of Jews to walk together or gather” outside the Jewish quarter, Kornfeld said. 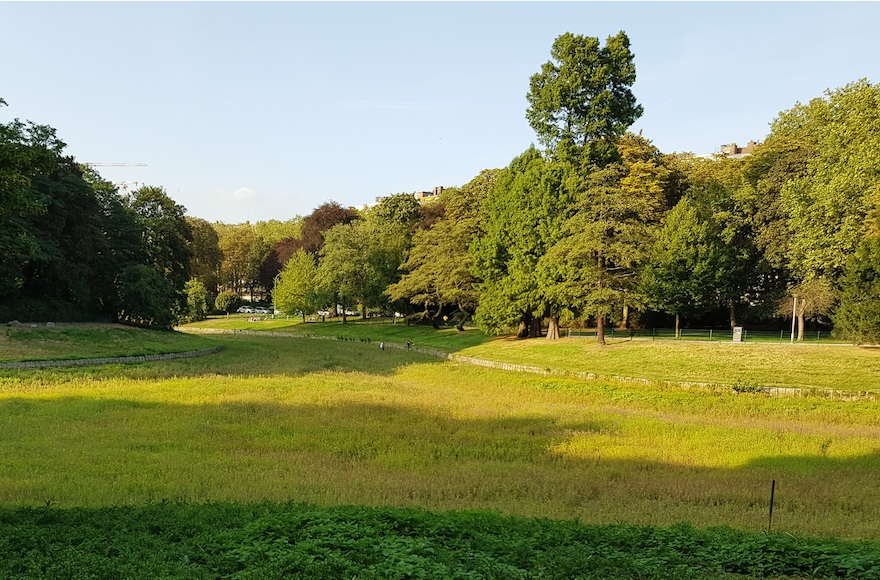 A view of what used to be the pond in Antwerp’s City Park, Belgium. (Cnaan Liphshiz)

Anti-Semitic attacks are relatively rare in Antwerp — partly thanks to the quick intervention of the local Shomrim group of volunteer guards. Still, in February this year, an Arab man was filmed ripping mezuzahs off doorframes in Antwerp and another was suspected of trying to drive his car into a man and his son on their way to synagogue on Shabbat.

Not everyone in the city’s haredi community is lamenting the suspension of communal tashlich at the City Park pond, which is locally known as the vijver – Flemish for “fountain.”

“Personally, I really don’t care,” Izzy Gottlieb, 40, said. “Tashlich is not about a social outing, it’s a time of solemn reflection about one’s sins, a purification. It’s a lonely moment actually and for me, experiencing it in my bathroom is fine.”