In ‘The Catcher Was a Spy,’ Paul Rudd is a Jewish baseball player turned Nazi hunter 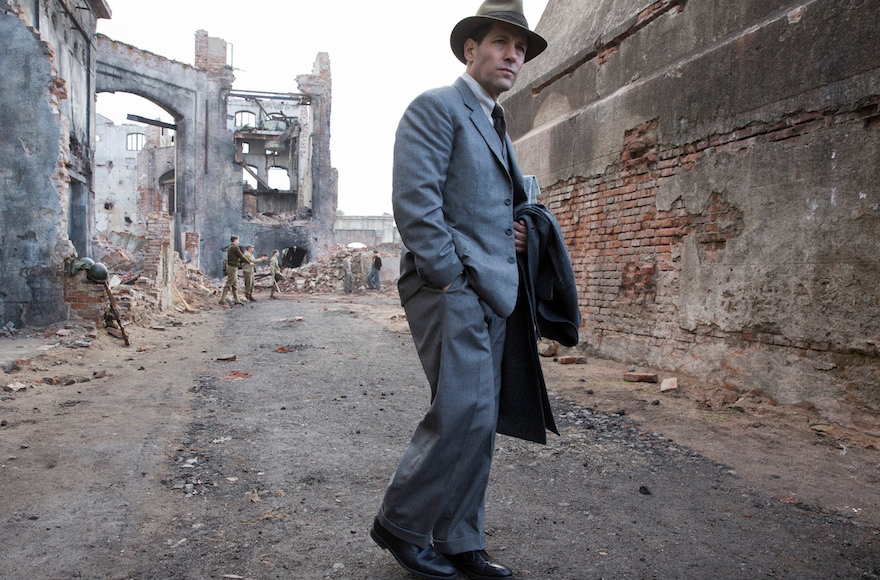 Paul Rudd plays Moe Berg in “The Catcher Was a Spy.” (Courtesy of IFC Films)

(JTA) — It’s rare enough for a Jewish baseball player to make it to the major leagues. A New York Jew named Moe Berg took it even a step further — he added war spy to his extraordinary resume.

Berg pulled off the feat over 60 years ago. As a catcher in the majors for 15 seasons during the 1920s and 30s, he was known more for his intelligence and introverted personality — famed manager Casey Stengel once called him the “strangest man ever to play baseball” — than his athletic skills. He read several newspapers each day, spoke more than 10 languages (seven fluently) and graduated from Princeton at a time when Jews normally weren’t admitted.

During World War II, after his baseball career, Berg worked for the U.S. government and eventually rose to a position in the Office of Strategic Services, or OSS — a precursor to the CIA. He went on missions in then-Yugoslavia, where he tracked resistance groups, and Italy, where he interviewed physicists about the German nuclear program.

The story sounds like great fodder for a movie, and that’s what it has become: “The Catcher Was a Spy,” based on a 1994 biography of the same name by Nicholas Dawidoff, opens Friday in theaters. Paul Rudd (who happens to be Jewish) stars as Berg alongside Mark Strong and Sienna Miller.

The film begins in 1939, his last season as a player, with the Boston Red Sox, before picking up several years later when Berg has a boring desk job at the OSS. His boss, Gen. William Donovan (played by Jeff Daniels), eventually assigns him a mission in the field, and with Sam Goudsmit (Paul Giamatti), Berg helps rescue the Italian physicist Eduardo Amaldi from the Nazis.

A more crucial assignment is to kill the famous German physicist Werner Heisenberg, a task with which Berg is not completely comfortable. There is no certainty that Germany has the resources to build a bomb (the Brits don’t believe they do) or even that Heisenberg, despite being a loyal German, will help them build a weapon of mass destruction. But Donovan decides not to take a chance and orders the hit. 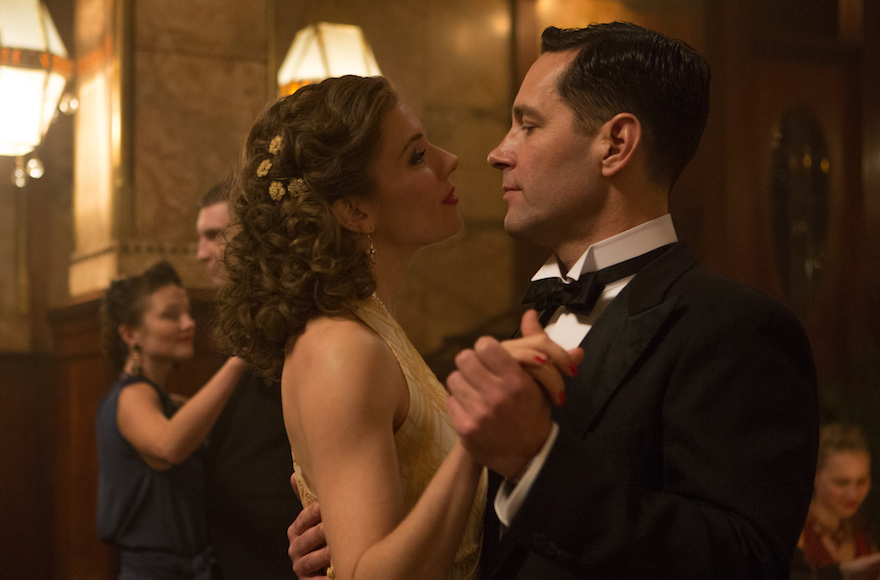 Sienna Miller stars alongside Paul Rudd in the film about Moe Berg. (Courtesy of IFC Films)

Berg was an enigma to most who knew him, and the film, directed by the Australian filmmaker Ben Lewin, paints a nuanced portrait of the complicated character. Though he had a longtime girlfriend, Estella (Sienna Miller), some questioned his sexual orientation. The general asks him point blank at one point if he’s “queer,” but Berg doesn’t answer. (Later in life, Berg became unemployed and subsisted with the help of relatives.)

As a whole, though, the movie falls in a bland area between truth and fiction. While Berg’s missions are fascinating on paper, the content isn’t particularly cinematic, the way a good James Bond film is. So while the end product stays honest to the facts, it sacrifices some enjoyment for the viewer.

The film does address Berg’s Jewish identity, however, and conveys how uncomfortable he was in his Jewish skin. At one point he tells a new acquaintance: “I’m a Jew. Not a practicing Jew. But I was different than the other boys. I never even told them my real name. I wanted to blend in … I don’t fit in even now.”

(Rudd’s personal story mirrors Berg’s a bit on this front — he explained last year on the genealogy show “Finding Your Roots” that he grew up in places with few Jews and was called “Jew boy” despite his attempts to blend in to his communities.)

Lewin, 71, the son of Polish Holocaust survivors, migrated with his family at a young age to Australia, where he grew up in an observant Jewish household. He had never heard of Berg before the film opportunity arose and, though now Los Angeles-based, has never been to a baseball game other than his sons’ Little League contests.

But he told JTA his Jewishness informs his “sense of connection with the subject matter.” In 1985, Lewin directed the award-winning “The Dunera Boys” a miniseries about 2,000 English Jews who were somehow suspected of being Nazi spies and deported to Australia.

In one scene late in “The Catcher Was a Spy,” Berg attends a Kol Nidre service at a Zurich synagogue during his mission to kill Heisenberg. While the film is based on true events, the Yom Kippur moment almost certainly never occurred. It was a conceit added by Lewin (even though Robert Rodat wrote the script).

Lewin doesn’t know whether Berg actually attended services, but he finds it a plausible possibility.

“[Berg] was a very modern and secular Jew, but at the same time he couldn’t escape his Jewishness,” the filmmaker said. “Before going out to kill someone, I don’t know that he didn’t go inside a synagogue. I know myself as a secular Jew that I find comfort in that kind of environment. I go to Kol Nidre services every year even though I’m not a believer because I have that one day to reflect on my life.”

The post In ‘The Catcher Was a Spy,’ Paul Rudd is a Jewish baseball player turned Nazi hunter appeared first on Jewish Telegraphic Agency.