In Tennessee primary, Trump backs the Jewish incumbent and the challenger is running on Christian values 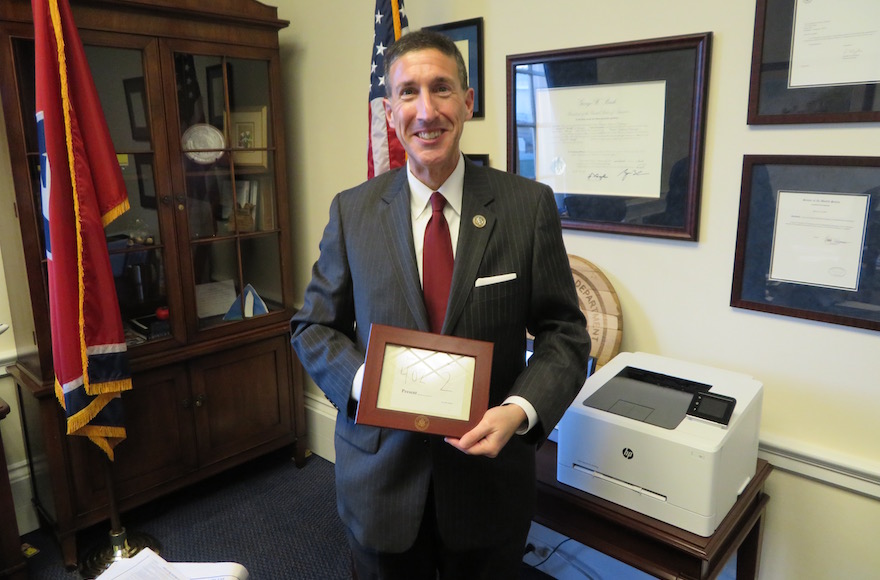 Kustoff is not taking anything for granted, though: Ahead of the Republican primary on Thursday, he is facing a challenger, George Flinn, who has spent more than twice what he has on the campaign and likes to remind voters that he is a “Christian conservative.”

Which is notable because Kustoff is Jewish.

This is not Flinn’s first run at public office. A radiologist who owns a network of clinics, Flinn has run for Congress three times previously and also for the state Senate. He has lost every time. His single win appears to be in 2006, as a county commissioner.

In 2016, when Kustoff won his freshman bid for Congress, Flinn described himself as a “Christian conservative” on the eve of the primary, and in response to a negative ad from Kustoff’s campaign.

This time around it has been a recurrent theme. In a post on his campaign website accompanying a video ad, Flinn deployed the “Christian” theme in a particularly loaded context: abortion rights.

(The Memphis Commercial Appeal said the ad made “questionable” claims; the Planned Parenthood funding was in a massive omnibus spending bill that drew more GOP votes than not.)

In an April 22 Facebook post, Flinn drew a blunt contrast between his “Christian, conservative” values and those of Kustoff. After campaigning in Tipton County that day, Flinn said “I talked with many who said they are fed up with the current congressman. They told me he has compromised our West Tennessee values and does not vote with our best interest in mind. I told them there’s a clear choice in this election. I will NOT compromise our Christian, conservative values.”

One of two commenters on the post said “There’s some shade. Christian values.”

The Kustoff campaign did not return multiple calls, but in an interview with JTA earlier this year, Kustoff said he was irked when Flinn invoked “Christian conservative” values on the eve of the 2016 primary – but was heartened by how enthusiastic voters were once they found out he was Jewish.

“When I campaigned for this office, I would literally knock on constituent doors, and I would get asked by some, ‘Where do you go to church?’ and my response would be ‘Temple Israel,’” he said at the time. “Virtually every time I would give that response, the person would say ‘I love Israel, what can I do to help?’”

Flinn’s campaign did not return multiple requests for comment.

Deploying one’s Christianity on the campaign trail is not unprecedented in U.S. politics, particularly in the South. Barack Obama drew Jewish ire for doing so ahead of the 2008 South Carolina primary, and another candidate in the 2016 Tennessee primary, Brad Greer, described West Tennessee as “Christian, conservative” territory in his campaigning. (Greer has endorsed Flinn.)

Brooks said Kustoff cannot afford to take any chances in a volatile election season that has seen the ouster of longtime incumbents. Flinn has spent $2.7 million of his own money on the campaign, while Kustoff has spent $1 million of funds he has raised.

Flinn depicts himself as closer to Trump’s values, but Kustoff has voted with the president 93 percent of the time. Additionally, Kustoff has precious currency in southern primary politics: Trump’s enthusiastic endorsement.

“Congressman David Kustoff has been a champion for the Trump Agenda — I greatly appreciate his support,” the president said. “David is strong on crime and borders, loves our Military, Vets and Second Amendment. Get out and vote for David on Thursday, August 2nd. He has my full and total Endorsement!”

It’s an unusual intensity of involvement made weirder by the stakes – Trump endorses to punish enemies, to reward loyalists or if he fears that one of the candidates in a close race would lose in the general election. He tends to boost the primary candidate he believes is the safe bet to beat the Democrat.

None of that applies here: Kustoff and Flinn are falling over each other to out-Trump one another on issues like immigration and health care, and the 8th is a lock for Republicans in November. It’s not clear why Trump is so deeply invested in this race; the White House did not return a request for comment.

Kustoff is leaving little to chance. In a recent ad, he got former Arkansas Gov. Mike Huckabee, a leading evangelist (and also a leader in the right-wing pro-Israel movement) to push back against Flinn’s negative ads on abortion. Huckabee noted that Kustoff has the National Right to Life endorsement.

“Don’t believe what he’s saying,” Huckabee said of Flinn, whom he calls a “failed career politician.” “Why? Because David Kustoff is a principled conservative.”