(JTA) – A brand-new, $50 million campus. A month in Israel every year. And a program to help students turn their social-service ideas into fully fledged nonprofits.

These are just some of the perks offered by the Jewish Leadership Academy, a new Jewish day school in Miami that aims to merge traditional Jewish learning with the trappings of the nation’s most elite private schools.

The new school plans to open in 2023 with middle school and high school grades of up to 45 students each, and will initially accept applications for 6th, 7th, 9th and 10th grades. Unusually for a Jewish day school, those students will be hand-picked based on their standardized test scores and other measures of academic ability — part of the school’s effort to combat what its founders say is “brain drain” in local Jewish education.

“Too many Jewish families in the Miami area with kids who are highly academically able, academically ambitious, were opting out of the Jewish day school world for the elite private schools,” JLA head of school Rabbi Gil Perl told the Jewish Telegraphic Agency.

Never miss a story. Sign up for JTA’s daily newsletter.

The school is the brainchild of Daniel Ades, a partner at the Kawa capital management firm, and his wife Gisela Ades, an immigration attorney. The couple, Brazilian Jews who met in college in Boston, are funding the school’s operations for now.

On the new school’s website, they explain that they considered funding teacher training, performance pay and student scholarships at existing Jewish day schools before determining that what Miami needs is a school that caters to “those few that wish [to], or can, achieve more” than the community’s Jewish schools offer.

South Florida’s recent boom in young Jewish families would seem to aid the school, but Perl said the roots of the project actually began pre-pandemic. Some Jewish families already in Miami saw a choice, Perl said, between “getting the academic experience they were looking for for their kids, or having them in a pro-Jewish, pro-Zionist environment. How do we take that choice off the table?”

Miami is home to multiple Jewish middle and high schools that boast college-preparatory academics, Judaic studies and travel to Israel for their students. The Posnack School in Davie enrolls students from a range of Jewish backgrounds; Scheck Hillel Community School in North Miami Beach, one of the largest Jewish schools in the country, is Orthodox in approach and offers merit scholarships in its high school. In Miami Beach, Hebrew Academy Miami (Rabbi Alexander S. Gross) is a Modern Orthodox school in the midst of building a new $15 million middle and high school.

Requests for comment to heads of school at all three institutions were not returned.

But Paul Bernstein, the CEO of Prizmah, a nonprofit that supports Jewish day schools and yeshivas in North America, said JLA’s launch should be seen not as a threat to other schools but as “adding to the strength of our community,” in part because of the rising demand for Jewish education in Miami.

He said Prizmah anticipates that other area schools will expand and other new ones could be created as the Jewish population there grows. (Enrollment in North American Jewish day schools grew by 3.7% between 2019 and 2021, according to the group.)

Bernstein told JTA that his group “applauds the creation of the Jewish Leadership Academy,” saying it would add to “the tremendous diversity of approaches” among Jewish day schools nationwide.

“Jewish day schools generally do not approach education as a competition with either schools, public or private, Jewish or not,” he said. “They embrace the opportunity to teach and nurture the whole child, and they provide a community of learning, both Jewish and secular, that enables students to thrive.”

JLA hopes to distinguish itself from the other schools by, first and foremost, catering only to high-achieving students.

“We are being very clear that we are only going to be teaching at an honors level or above,” Perl said. “That’s what our school is here to do. And in this way, it’s pretty unique. I don’t know if there’s another Jewish day school that’s done this.”

Many cities, including Miami, have selective public high schools; several recent studies have found that attending selective schools may cause long-term harm to students. But Perl and JLA see their vision as the next logical step for Jewish education, after spending “the past 20, 30 years” investing in “that student population that has struggled… academically, struggled socially, emotionally.”

“I don’t think our large Jewish communities have yet made the investment in the students who are on the other side of the spectrum, who have the potential to truly go beyond what a community school could possibly offer,” Perl said.

Tuition, meanwhile, will be “need-blind,” meaning that students will be admitted without regard to their need for financial aid; what they pay will be determined by what their families can afford. (The cost of the full annual tuition is $42,000, about $10,000 higher than at other area day schools.) Perl says it is key that students have the opportunity to interact with Jews of varied socioeconomic backgrounds. The foundation will cover the cost of the need-blind tuition for around the first decade of JLA’s existence, by which time the organization hopes to have established an endowment. 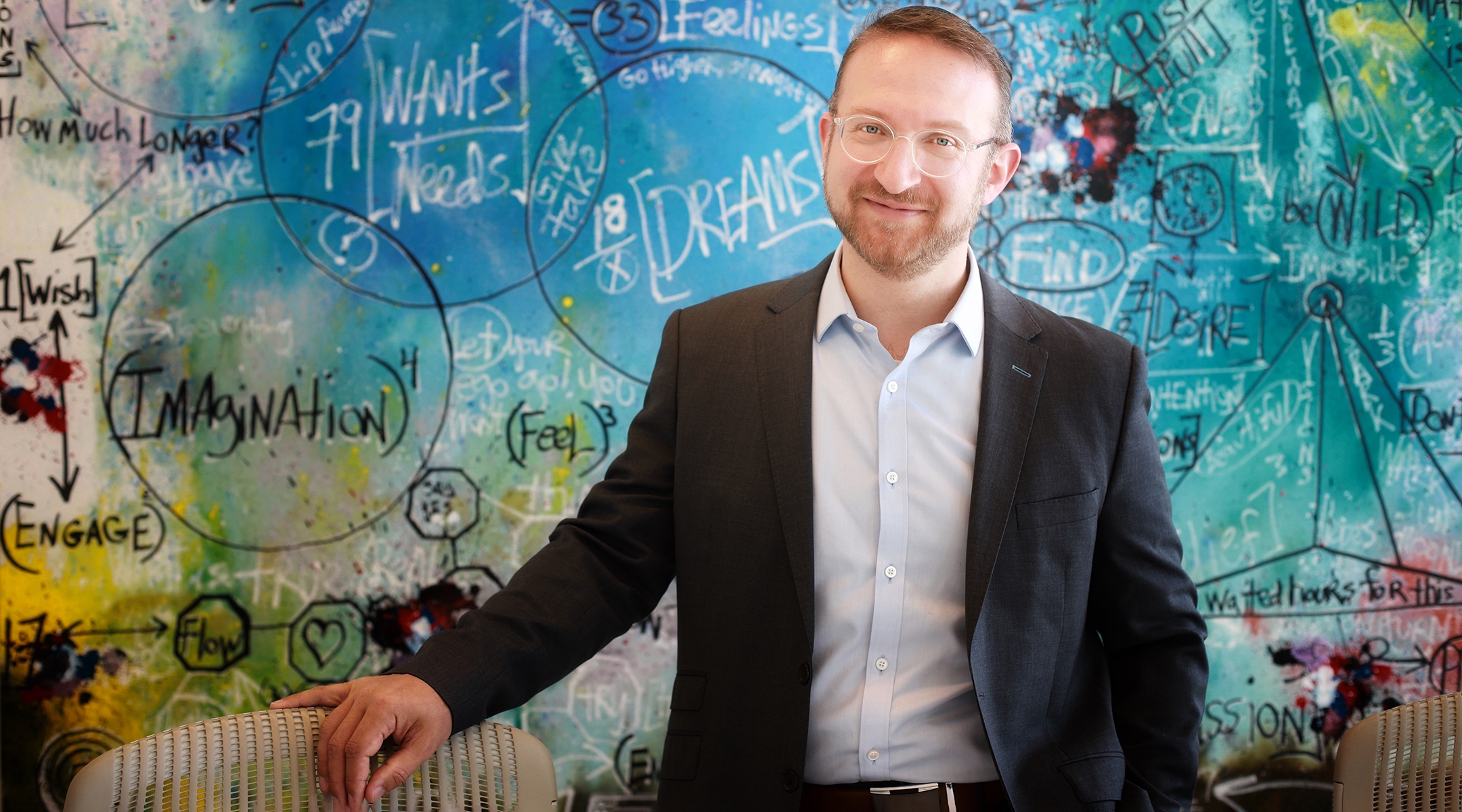 Initially, Perl — a longtime researcher of Jewish education who was previously the head of school at Kohelet Yeshiva in the Philadelphia suburb of Merion Station, Pennsylvania — had only been contracted as a consultant on the venture. But the possibilities of the new school so excited him that he agreed to join JLA full-time.

Now he is the founding head of school, as well as the CEO of the Ades Family Foundation, which shepherds the money for the school and other related initiatives including a continuing education fund for Miami-area Jewish educators and a plan to create affordable housing support for “Jewish community professionals.”

Though its guiding principle is Modern Orthodox, JLA is not a yeshiva — only about one-fourth of its curriculum will be religious, compared to the 50/50 breakdown students encounter at most Orthodox schools. But by having all students from eighth grade up begin their school year in Israel with nearly a month of Jewish- and Israel-focused instruction just prior to the High Holidays, the school also offers an immersive Jewish component.

That Israel experience will be covered as part of the cost of tuition, and will be done in partnership with the Alexander Muss High School in Israel, a school in the Tel Aviv suburb of Hod Hasharon that typically offers study-abroad programs to Jewish students from across the Diaspora. Perl envisions that the annual trip will allow returning students to expand on their Israel education each year in unique ways.

“So often a trip to Israel is a one-hit wonder” for Jewish schools, he said, referring to programs such as semesters abroad or summer trips. If money were no object, he said, the ideal Israel education would involve multiple returning visits to the region.

“Obviously it’s a logistical challenge — it’s a financial challenge for most schools,” Perl said. “But if we can solve the logistics and we can solve the finances, then there’s no question that we think this is our best shot at getting the educational outcomes that we’re looking for.”

JLA’s multimillion-dollar campus, entirely paid for by the Adeses, will include a music recording studio, a “Fabrication Lab” with 3-D printers and an athletic facility with three full basketball courts. It’s currently under construction in Miami’s Pinewood neighborhood, the location chosen because it’s equidistant to the metropolitan area’s major Jewish population centers.

Jewish day schools have been looking to innovate on their core model for years, not always successfully; an attempt in the past decade to operate a Jewish pluralistic boarding school in North Carolina called the American Hebrew Academy ended with the school’s abrupt closure in 2019 due to lack of funding.

But Perl says any comparison with the American Hebrew Academy falls short, both because JLA is focusing on local students rather than convincing them to board from elsewhere, and because his school didn’t have to take on any debt to get off the ground.

Area families have expressed “extreme excitement” about the program, but some have their reservations, Perl said.

“We have families for whom it’s, ‘Why [are] there only two Judaic periods [per day]? Can’t you do more?’ And there are others who are wondering, ‘Well, why is it Modern Orthodox? Am I going to be comfortable in a Modern Orthodox setting?’” Overall, though, he said, “we think that we’ve hit a sweet spot.”

One thing Perl says he’s sure of: A Jewish school that tries to appeal to every student in its Jewish community is a losing strategy. “I do believe strongly that the desire, the need, to be everything to everyone is ultimately what creates mediocrity.”