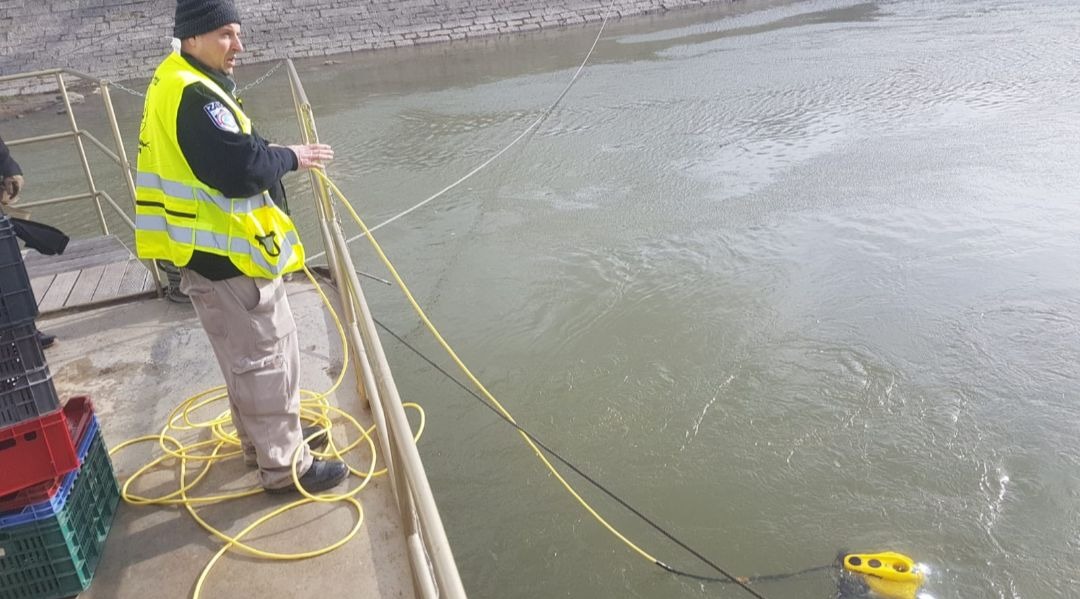 How to work with the government is an understandably divisive issue in a country whose government is often accused of encouraging anti-Semitic rhetoric.

But late last week, the fight veered away from politics and spilled over into one of the major dilemmas facing Eastern European Jewish populations: How to treat the remains of Holocaust victims.

The new dispute over giving such remains a proper burial marks a new and worrisome low in the internal fight, which now has been extended to include a core issue of the Jewish faith. It raises concerns as to the depths of division among the 100,000 Jews living in Hungary – by far Central Europe’s largest Jewish community.

The burial fight began with a sonar sweep Jan. 15 of the floor of the Danube River. Commissioned by EMIH’s leader, Chabad Rabbi Slomo Koves, the sweep ended without meeting its aim of identifying bones of some of the thousands of people that Nazi collaborators shot and dumped into the river during the Holocaust.

But what started out as an example of innovative technology being used to bring dignity to unburied victims quickly devolved into a vociferous exchange that included even Israel’s interior minister, Aryeh Deri.

The sweep “insults the calm and dignity of Jewish or non-Jewish dead people who may be found during the exploration,” Mazsihisz wrote a day after the scan. “Moreover it breaks halacha,” or Orthodox Jewish law, the federation group said in its statement. Rabbi Zoltan Radnoti, the chairman of the rabbinical council of Mazsihisz, told JTA that any bones found likely would be from one of the thousands of non-Jewish German, Soviet and local troops and civilians who died in fighting along the riverbank.

Mazsihisz itself organized in 2016 a Jewish burial for bones that had been found in the Danube in 2011 amid renovations on the foundations of Budapest’s Margaret Bridge. “We had a multifaith burial ceremony, with two priests and rabbis from various denominations,” Radnoti said of the ceremony. “It’s true that these were likely Jews but the truth is there is no way of knowing for certain.”

Koves said that most people killed in the Danube were Jews. He cited DNA testing on the bones found in 2011. Of the 15 people identified from the bones, at least nine had Ashkenazi Jewish DNA, the tests showed.

Both groups can cite principles from halacha, which state that bones should be buried when there is a danger to the dignity of the dead but forbids disturbing Jews’ remains in all but the most extreme circumstances.

EMIH, for its part, described the retrieval mission as fulfilling the “major mitzvah of bringing the victims to burial.”

But the core of EMIH’s dispute with Mazsihisz is not about halacha. Rather, it is a fight over attitudes toward Hungary’s controversial government and its funding for Jewish groups, where EMIH clearly seems favored.

“This fight over the Danube is part of the bigger fight,” Radnoti acknowledged.

The two groups have clashed publicly recently over EMIH’s taking over of a state-funded Holocaust museum. The person tapped to head the museum, Maria Schmidt, is a right-wing historian who has been accused of distorting the Holocaust. In light of this, Mazsihisz criticized EMIH’s decision to head the House of Fates museum, which has not yet opened.

“There is no way this museum will operate independently,” Radnoti said in explaining his group’s objections. But EMIH said they would have total discretion over the museum’s content.

For those seeking unity among Jews, internal fights about the memory of the Holocaust are painful. But in Hungary, politics spilled over to disagreements about one of the fundamentals of being Jewish.

Deri, who heads Israel’s Sephardic Orthodox Shas Party, decided to wade into the fight and turn it into an interdenominational religious conflict with a statement that inaccurately labeled Mazsihisz as a “Reform” community. (Mazsihisz does have many members of the Neolog stream, an endemic movement that is fairly liberal but far closer to modern Orthodox streams than to either Reform or Conservative Judaism.)

“I was deeply shocked by the [Mazsihisz] statement, in which it used false pretenses to oppose, in violation of the Jewish conscience, bringing to burial the remains of the martyrs,” Deri wrote. “It is shocking and appalling that some are carrying out political score settling on the backs of those murdered in the Holocaust,” he added.

Radnoti said that Deri’s characterization of Mazsihisz was “a disgusting form of character assassination.”