Amid geopolitical uncertainty, rising antisemitism across Europe and the worsening COVID-19 pandemic, a who’s who of prominent Jews will gather virtually December 15-16 to celebrate the 30th anniversary of diplomatic relations between Israel and Ukraine.

“Of course, the fight against antisemitism is important, but we don’t want to focus only on traditional Jewish issues,” said Boris Lozhkin, president of the Kyiv-based Jewish Confederation of Ukraine. “We’ll also have panels on how Israel became the startup nation, and how to transform that knowledge to other countries like Ukraine — as well as a panel about coronavirus, with participation by top authorities of health of both Israel and Ukraine.”

The online event is being organized by Lozhkin’s confederation along with two other nonprofit groups: the Center for Jewish Impact and the Combat Antisemitism Movement.

In its first year, the event attracted 500 people to Kyiv. But last year, with the pandemic already forcing many countries into lockdowns, it was held virtually, and 83,000 viewers followed the speeches and panels online. This time, some 400,000 to 500,000 people are expected to tune in, for sessions during and after the event, with potentially millions more watching Ukrainian national TV coverage of the event, according to Robert Singer, chairman of the Center for Jewish Impact.

“Ukraine’s Jewish community is underestimated. People don’t realize that it’s one of the largest in the world,” said Singer, estimating that at least 300,000 of the country’s 41 million citizens would qualify as Jews under Israel’s Law of Return. “Many elements of Jewish culture, literature, poetry and science came from Jews who were originally from Ukraine, including politicians such as Ze’ev Jabotinsky and Golda Meir.”

Singer, who hails from the western Ukrainian city of Cernivtsi, formerly known as Czernowitz, emigrated to Israel in 1972 with his family in the first large-scale wave of aliyah, or immigration to Israel, during Soviet rule. In 1991, following the Soviet Union’s collapse, he was among the first Israeli diplomats to arrive in Kyiv and establish diplomatic ties between Israel and newly independent Ukraine. 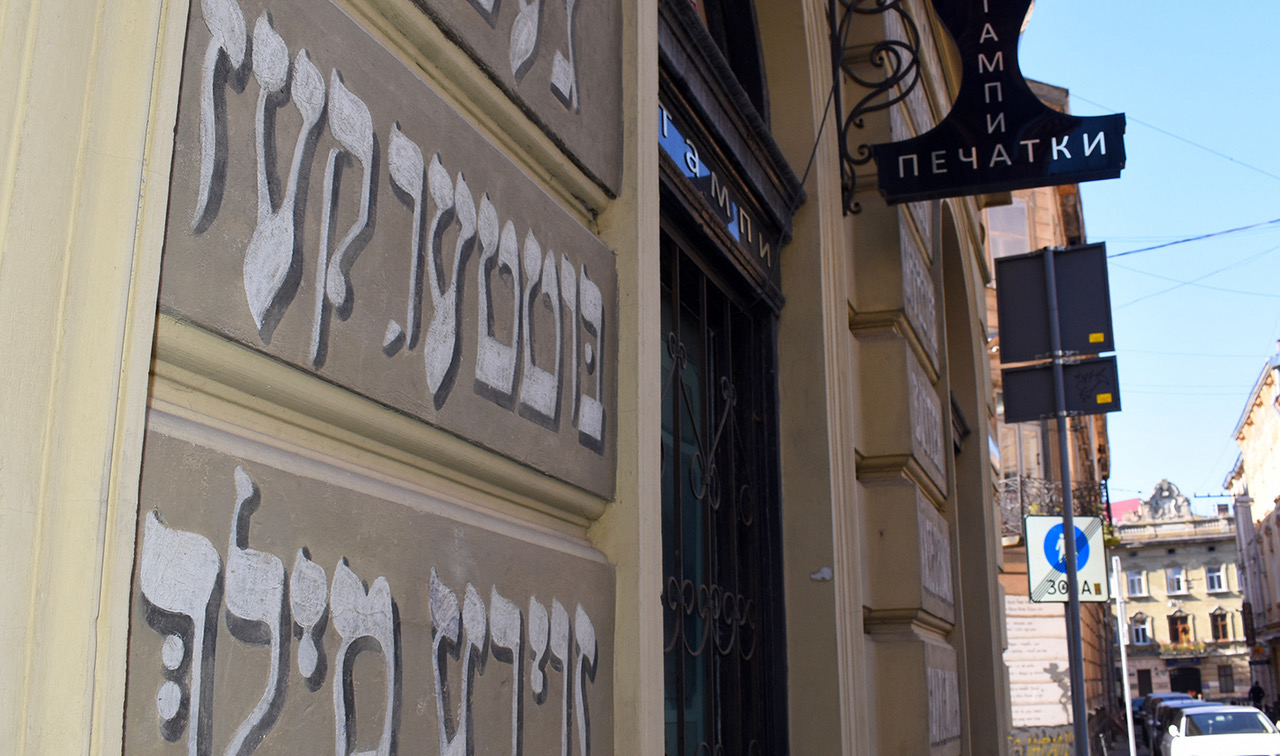 A hand-painted Yiddish sign is visible outside of what was once a Jewish-owned shop in the former ghetto of Lviv, Ukraine. Today the country has strong ties to Israel. (Larry Luxner)

Singer praised Ukraine for recently adopting the International Holocaust Remembrance Alliance definition of antisemitism. Yet he warned of ultranationalist “attempts to rewrite the history of Jewish life in Ukraine, especially during the Holocaust” in some pockets of Ukraine — Europe’s second-largest country in size after Russia but the continent’s poorest in terms of annual per-capita income.

“Many things were done in the right direction, but I feel it’s not enough, and more needs to be done,” Singer said. “The broad public is very much aware of these issues.”

Lozhkin, 50, agrees. Citing a 2018 survey by the Pew Research Center, he said that 83% of his fellow Ukrainians view Jews favorably — the highest ratio anywhere in Central and Eastern Europe.

“For a period in 2019, Ukraine was the only country in the world outside Israel where both the president and the prime minister were Jewish,” said the former journalist from the Ukrainian city of Kharkiv, who over the years built his own publication into one of the nation’s biggest media conglomerates. “Quite a few Jews who have left Ukraine became Israelis, and now they’re coming back for business reasons. Ukraine is growing and it’s a good place to make money.”

“For example, Ukraine’s IT business is developing rapidly, and currently more than half of the Israeli outsourcing in the IT sphere goes to Ukraine,” he said, noting that more than 30,000 Ukrainians — most of them not Jewish — are now working remotely for Israeli companies.

Brodsky said that bilateral trade between Israel and Ukraine exceeds $700 million a year, and that that the relationship between both countries is especially warm, given that half a million Ukrainian Jews have moved to Israel over the years and that some 50,000 Israeli citizens currently live in Ukraine.

“When it comes to diplomatic relations, we have much to talk about,” Brodsky said, noting that Dec. 24 marks 30 years since the establishment of Ukraine-Israel ties. “I would describe our relationship as family. We are so close to each other, both geographically and metaphysically.”

Israel and Ukraine are cooperating extensively in the battle against two scourges: COVID-19 and antisemitism, Brodsky said. To date, only 17% of Ukrainians are vaccinated — one of the lowest rates in Europe — largely due to distrust of the government and conspiracy theories. Coronavirus deaths are breaking records every day.

“We have had very good connections between our hospitals, and Israeli doctors are going to Ukraine to offer extensive cooperation on COVID, as well as offering Ukraine assistance in obtaining vaccines,” Brodsky said.

As for combatting age-old hatred of Jews, he said, that’s a different story.

“Almost every country in the world has antisemitism, so from this perspective, Ukraine is no different,” Brodsky said, noting that Ukraine’s Parliament passed a law banning antisemitism and Holocaust denial shortly before Israeli President Herzog’s October visit to Kyiv to mark the 80th anniversary of the Babyn Yar massacre. “Obviously, this is a very important step in the right direction; the real test will be if the government enforces it. But this remains to be seen.”