In Britain, Labour rebels give Jews hope of a new political home

(JTA) — Even before he was old enough to vote, Justyn Trenner was already a supporter of Britain’s Labour Party.

Trenner, now a 54-year-old financial adviser from London, had felt at home there thanks to Labour’s mild socialism and anti-racist agenda. That had made it a favorite for many British Jewish voters like him.

But he and other Jews have become politically homeless.

Trenner feels like he’s been driven out of Labour by the proliferation of anti-Semitic hate speech in the party ranks following the 2015 election of Jeremy Corbyn as its leader. Corbyn, far left and anti-Israel, is accused of helping to spread anti-Semitism.

Scarcely better for Trenner are the increasingly right-wing positions of the ruling Conservative Party, which is committed to taking the United Kingdom out of the European Union despite having no clear strategy with the deadline just weeks away.

Last week, though, Trenner found a new political home: the Independent Group. The new centrist movement was founded by eight former Labour lawmakers who hope to recalibrate the polarized politics in Britain. He wants the Independent Group to do for moderates there what the party of Emmanuel Macron, the president of France, did for their French counterparts in 2017.

“I was thrilled,” Trenner said of the Independent Group’s Feb. 18 creation. “No one knows how this will play out, but I think it’s a development that could change British politics and give a voice to a lot of people who had lost it along the way.”

Since its surprise launch by Labour defectors including Luciana Berger, a Jewish lawmaker who quit the party over anti-Semitic abuse online for criticizing Corbyn, the Independent Group has been joined by three Conservative lawmakers.

Constituting the biggest Labour split in decades, the Independent Group’s 11 seats out of 650 in the House of Commons make it the fourth-largest faction there along with the 31-year-old Liberal Democrat Party. The split has further hurt Corbyn’s Labour by prompting another one of its lawmakers, Ian Austin, to leave over anti-Semitism on Friday.

Neil Nerva, a Jewish Labour politician from the London borough of Brent, shares Austin’s concerns about Labour, which Nerva said has become “institutionally anti-Semitic” under Corbyn. But Nerva is staying in Labour for now, he said, at least until his many foreign constituents have more clarity on Brexit, which is due to happen next month.

“It’s the overriding priority now,” Nerva said. “There will definitely be a recalibration in Labour after that.”

Another 20 lawmakers are on the brink of leaving Labour over anti-Semitism and Corbyn’s perceived inaction to prevent Brexit, according to The Guardian. Many of them are seeking Labour support for a second referendum on Brexit. Corbyn had resisted this pressure until the Independent Group walkout but announced his support for a referendum on Monday.

Austin, the ninth Labour lawmaker to leave, was joined by David Hirsh, a prominent scholar and author on anti-Semitism.

“I was just waiting for a time to leave when leaving could have the most impact,” Hirsh, who is not a politician but had been a Labour member throughout his adult life, wrote about his decision to terminate his membership.

“I have been driven out of my party by antisemites,” he wrote.

Berger, as its highest-profile Jewish member, may attract many Jewish supporters to the Independent Group. She echoed Hirsh’s sentiment in announcing the split at a news conference with the others who quit Labour.

“This has been a very difficult, painful but necessary decision,” she said about leaving. “I have become embarrassed and ashamed to remain in the Labour Party. I have not changed. The core values of equality for all. Opportunity for all. Anti-racism against all. And social justice.”

The 37-year-old Berger, who is pregnant with her second child, is something of a hero for many British Jews regardless of where they stand on Labour.

Although she hails from London’s affluent Wembley area, she has become quite popular in the impoverished Liverpool constituency where she ran for Parliament. She won 79 percent of the vote there in the 2017 elections, a 10-point increase over 2015. Berger, who entered Parliament in the 2010 elections, was Labour’s point person for mental health issues.

An unwavering critic of the British far right, she has spoken out with the same determination against the rise of anti-Semitism among Corbyn supporters, who often conflate Jews with Israel and propagate conspiracy theories about Jews. As a former chair of the Labour Friends of Israel group, she has been targeted incessantly in such verbal attacks.

Her rebuke for such rhetoric earned her even more vicious harassment by members of her own party. But Berger has not wavered, criticizing Corbyn last year for defending an anti-Semitic mural in London in 2013 that portrayed Jewish bankers playing Monopoly on the backs of black people.

She called a Corbyn spokesperson’s defense of the artist’s right to free speech “wholly inadequate. It fails to understand on any level the hurt and anguish felt about anti-Semitism. I will be raising this further.”

Berger has inspired hundreds of hate messages on social networks and beyond, prompting police to assign her agents for her own protection at a Labour event last year. On Twitter, a post wished for her death, “so a real Labour MP can take her place.” 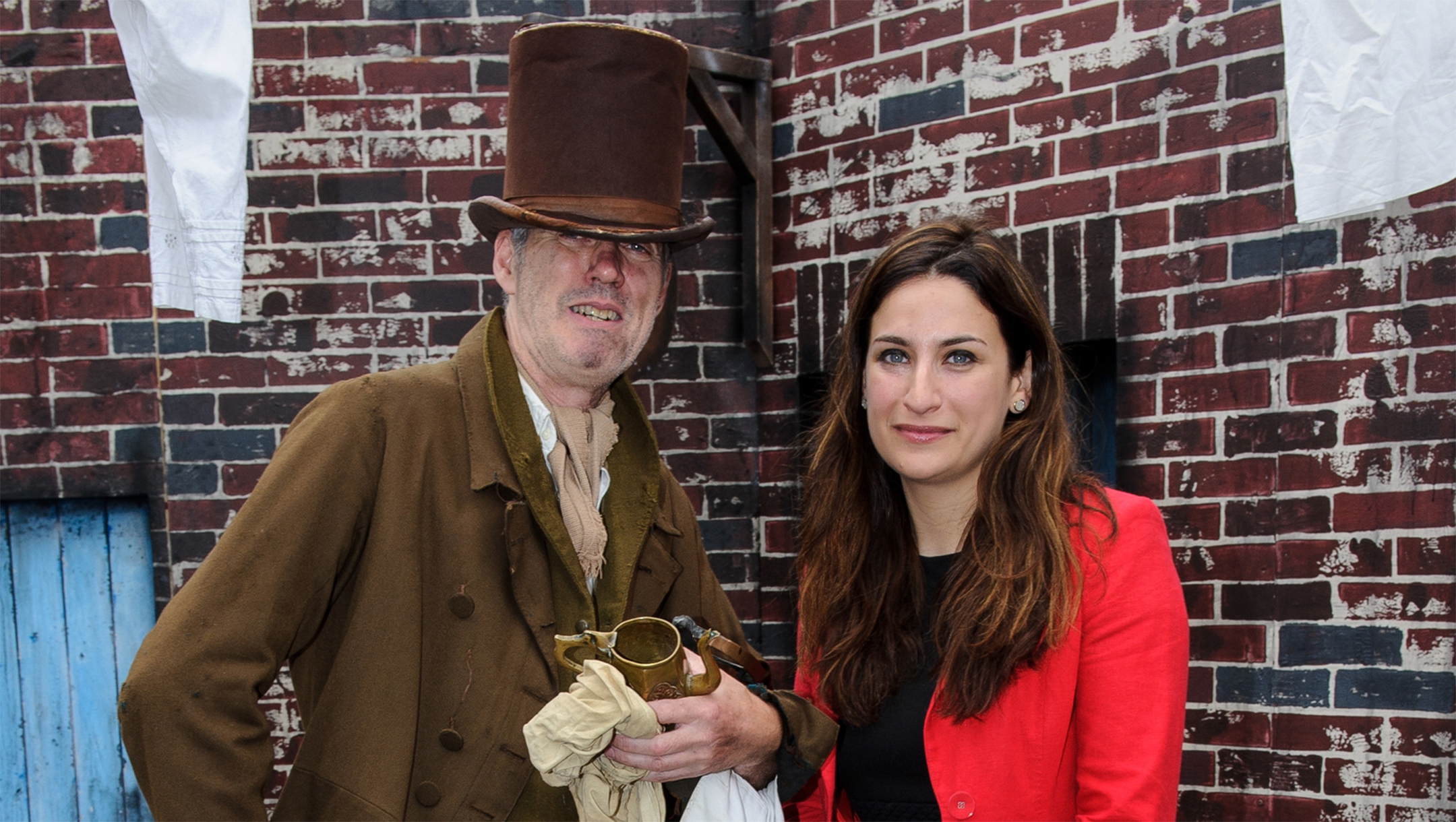 Luciana Berger meets an actor at an event raising awareness for access to clean water in London, July 21, 2015. (Courtesy of Berger)

The former chief rabbi of Britain, Jonathan Sacks, last year said that Corbyn was an anti-Semite. Corbyn has denied the claim, pointing to his ban of some Labour members over anti-Semitic hate speech – others who spoke similarly were either unpunished or allowed back in – and citing the support he has from some Jews on the far left of the political spectrum.

In 2009, Corbyn called Hamas and Hezbollah his friends. He laid flowers on the graves of Palestinian terrorists in 2014. In 2015 he said that British-born “Zionists” don’t understand British irony. He has called to boycott Israel and applauded a speaker who called for its destruction.

Berger’s principled stance against such behavior has earned her the admiration of Jews and non-Jews from her left and right.

Daily Telegraph columnist Zoe Strimpel on Sunday called Berger a “brilliant poster girl who Jews can get behind.”

“I may not cleave to Luciana’s lefty lingo,” wrote Strimpel, who is Jewish. But, she added, “I’ve watched her over the years with interest and gratitude, which peaked last week on seeing her bravely — and with fabulous hair — resign from Labour because of an institutionalized and unstaunched culture of antisemitism.”

Among hard-left Jewish voters, too, Berger commands more respect than others who have fled Labour.

“I think I’m much more sympathetic to her and her views than to other Labour centrists,” said Keith Kahn-Harris, a British Jewish sociologist. He cited Berger’s work on mental health.

More than other members of the Independent Group, Kahn-Harris said, discourse by Corbyn supporters about her leaving Labour “has been particularly venomous precisely because Berger can’t simply be dismissed” as Conservative-light.

For now, Berger’s Independent Group isn’t even officially registered as a political party. It has not published a manifesto or platform beyond a short, 11-point document that speaks broadly about investing in health infrastructure, national security and bilateral relations. Remarkably, it does not mention either Brexit or anti-Semitism.

This vagueness may be necessary as the movement recruits new members, who will be invited to shape its platform. The new entity does not have a leader, either, presumably for the same reasons.

Despite assets like Berger and growing voter disdain for Britain’s old parties – the Independent Group’s tagline is “Politics is broke. Let’s change it” — the movement is up against a two-party system that is entrenched in the British constituency-based electoral model. Trenner noted that the Liberal Democrats have been vying in it for decades with limited success.

But France’s political system appeared equally inhospitable to independent movements before 2017, when Macron’s centrist La Republique En Marche smashed the widely discredited Republicans and Socialists, as well as the far right and far left, to make him president and head of the ruling party.

Kahn-Harris does not believe that a meteoric Macron-style rise is in the cards for the Independent Group.

“What could happen is that they win enough votes to become, perhaps with the Liberal Democrats, kingmakers in coalition talks,” he told the Jewish Telegraphic Agency.

In Britain, politicians are not elected directly. Instead, voters elect parties, which at times need to negotiate alliances with other parties to form coalitions.

Trenner said “there’s some hope” for the would-be party to pull off a Macron-like upset.

But if the Independent Group merely ends up preventing Corbyn from becoming prime minister, he said, “then that’s good enough.” That prospect, he added, “for the first time in my life is creating a serious discussion among British Jews about leaving this country.”