In a first, a transgender person is campus president of this Jewish sorority

(JTA) — In December, the Jewish sorority at the University of Cincinnati elected a new president. The new leader was a founding member of the campus group who was highly involved in Jewish life at the university.

But the 21-year-old’s election was surprising in at least one way: For the first time, Sigma Alpha Epsilon Pi, or SAEPi, would be led by someone not identifying as a woman.

About a year earlier, Elliot Draznin came out to the sorority sisters as nonbinary, identifying neither as a man or woman. Draznin asked to be referred to using “they” as a singular pronoun instead of “she.”

Despite the new identity, the fourth-year business student wanted to remain a member of the sorority “colony,” whose vision is “to provide a Jewish environment for collegiate women to grow as individuals and leaders.”

“It was a lot of deciding that I believe in this mission, so even though I don’t identify as a woman, I’m going to stay in this gendered space to keep the idea of a Jewish space for women alive on the University of Cincinnati’s campus,” Draznin told JTA last week.

In August, SAEPi, which was founded in 1998 and has 23 chapters and colonies across the country, changed its policy to make it clear that transgender and gender nonconforming people are welcomed as members.

The decision was prompted both by Draznin and two other transgender individuals joining the sorority, as well as conversations happening around inclusion with other Greek organizations, according to executive director Chayla Furlong.

“Both our campus partners and the national organization share the responsibility of ensuring that students who maybe don’t identify as cisgender or heteronormative have the opportunity to know explicitly where they are going to have the most positive, inclusive and welcoming experience,” she said.

Like SAEPi, an increasing number of sororities and fraternities have released policies welcoming transgender members in recent years. In 2017, the historically Jewish sorority Alpha Epsilon Phi changed its policy to include transgender women, though it did not mention those who identify as nonbinary.

Draznin is the first openly transgender person at the University of Cincinnati to serve as the president of a Greek organization, according to Jayson Douglas, interim director of the school’s LGBTQ center.

“Elliot’s presence in this role has sparked conversations across campus among several other fraternities and sororities to challenge their national boards to revisit their intake policies and practices to be more inclusive, specially of trans people,” Douglas told JTA in an email. 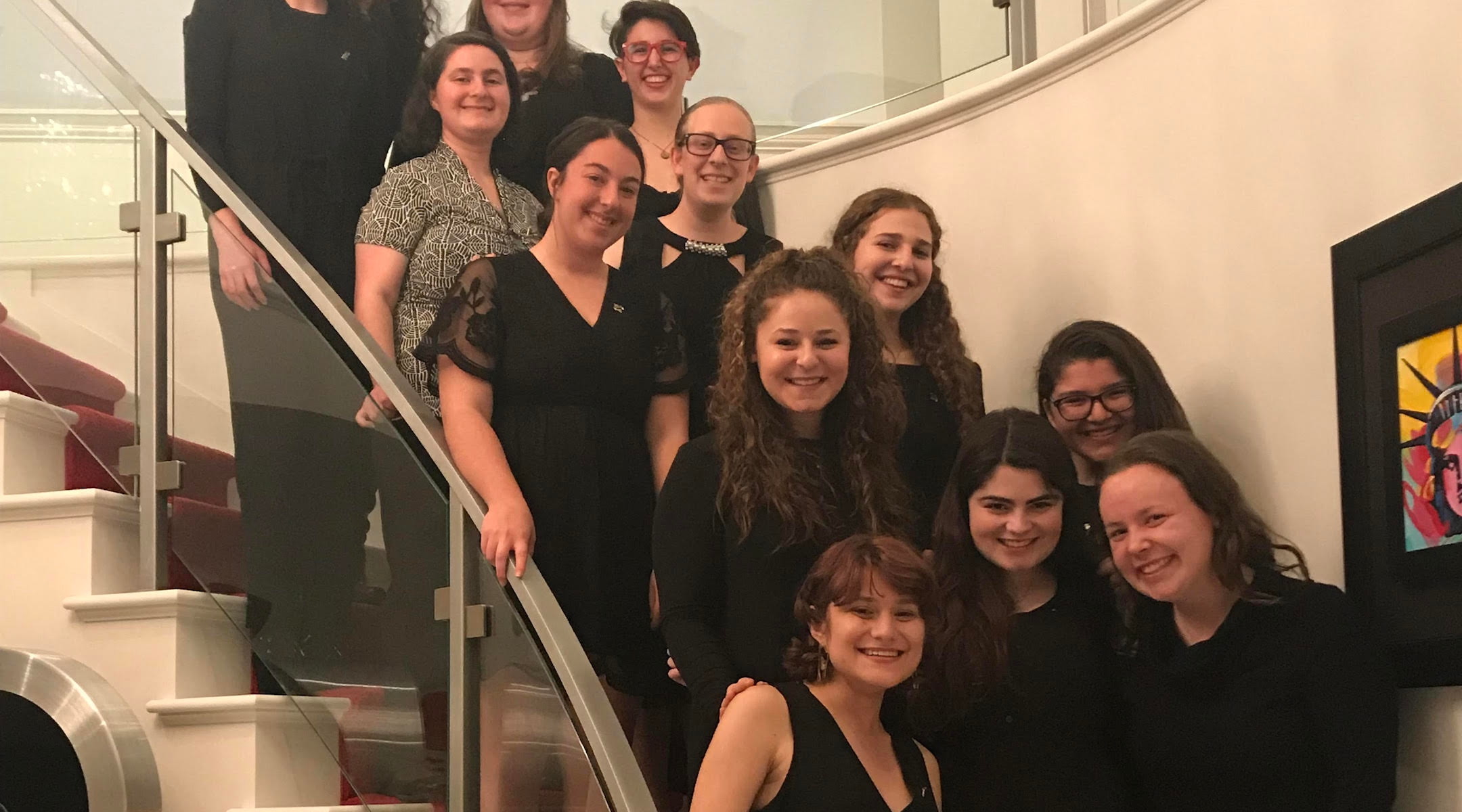 “I realized I didn’t fully feel like I was a woman all the time, but I didn’t ever feel that I was a man either,” Draznin said.

During college, as they met others who shared similar feelings, Draznin felt comfortable coming out, a process that they describe as “kind of nerve-wracking.”

Draznin, who also serves as programming chair for the university’s Hillel, decided to found the Cincinnati chapter of SAEPi in 2016 along with five others because there was no campus group specifically for Jewish women. The chapter currently has 15 members and hosts Shabbat dinners, Rosh Hodesh events and religious services.

Though transgender people still face challenges in the Jewish community — particularly in the Orthodox world — they are increasingly being welcomed in many progressive Jewish communities.

The Union for Reform Judaism — the congregational arm of the largest Jewish movement in the United States — offers guidance to synagogues on how to tailor b’nei mitzvah ceremonies for transgender or nonbinary children. The teen programming group Moving Traditions runs a monthly discussion group for Jewish transgender and nonbinary teens.

Draznin, who grew up attending a Reform synagogue in Fairfax, Virginia, says they were more worried about backlash from other students and members in the Greek community than from the Jewish community.

“For me, Judaism has always been a really, really inclusive and accepting space. Our Hillel actually has a trans staff member, so for the past few years I’ve had that to look to,” Draznin said.

A few members of the Jewish community made disapproving comments about Draznin’s gender identity, but the bulk of the pushback has happened in the classroom.

“I’ve faced a decent amount of backlash from professors and other students,” Draznin said. “Not being outright cruel but just a general ‘I don’t understand this, so I don’t really know how to treat you as a student and as a peer.’ I’ve had a peer in a class tell me that trans people don’t exist.”

Draznin describes being able to find a home on campus where they and other gender nonconforming people are accepted as “incredible.”

“When I’m with those sorority sisters I’m in a gendered space, but I’m not seen for my gender.” Draznin said. “I’m seen for who I am and what I can offer the group.”