In 1944, she performed an opera at a concentration camp. 70 years later, I got to meet her. 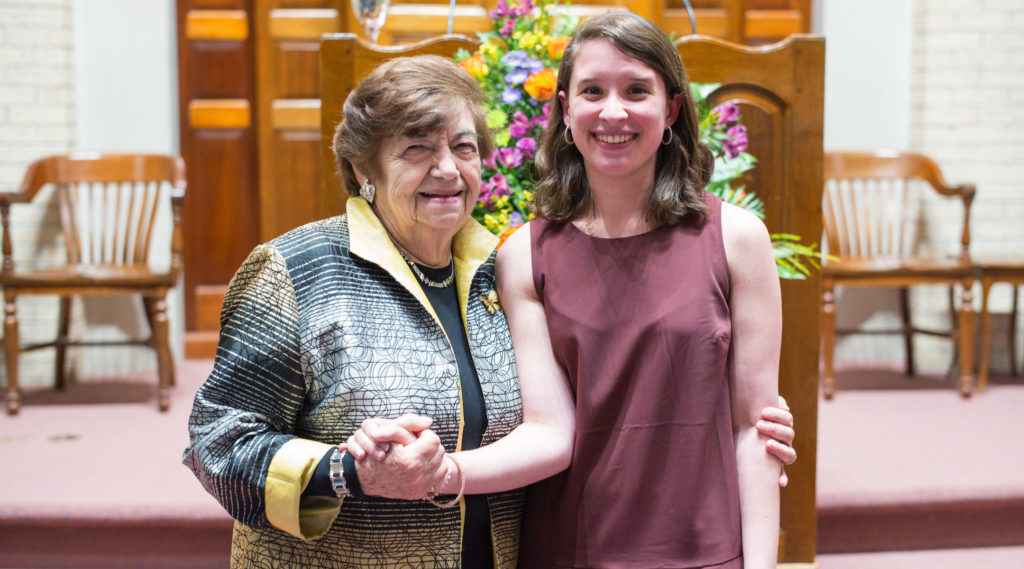 NEW ORLEANS (JTA) — Ela Weissberger, though tiny and elderly when I met her, was the strongest woman I have ever known.

Her energy was indefatigable, her personality vibrant and sunny, her wit sharp and charming. Her magical rapport with children was undeniable.

Ela was a Holocaust survivor, sent at age 11 to Theresienstadt, or Terezin, in Czechoslovakia, from her home in Prague. At the concentration camp, Ela performed in the children’s opera “Brundibar,” written for the Prague Children’s Opera by Hans Krasa and later smuggled into Theresienstadt.

The Nazi guards there paraded the children to perform “Brundibar” in front of the Red Cross for propaganda purposes, hoping to convince the world that Jews under Nazi control were well treated. Ela was made to perform the role of the Cat 55 times. On the night of the last performance, most of the children in the cast were sent to Auschwitz, where they perished.

“Brundibar” also survived the Holocaust and is now performed to memorialize the children who were murdered. And Ela became its most loyal champion. After surviving the war, she spent much of the rest of her life traveling the world to attend every production of “Brundibar” that she could. She gave speeches and spoke with the children, and followed the opera in hopes of preserving the message of music and friendship that it portrays.

Ela was thrilled to see the resurgence of “Brundibar,” as it kept alive the memory of her friends. Music and hope went hand in hand for Ela.

When Ela died in March at 87, her passing was little noted outside of North Carolina, where she was living. But for those like me who got to know her through “Brundibar” — and others who learned her story through newspaper articles or her own oral testimony and videos, or the 1991 documentary “The Journey of Butterfly” — her life was a defiant message of hope amid the destruction.

“Brundibar” tells the story of a brother and sister who need to earn money to buy milk for their sick mother but must defeat the evil organ grinder Brundibar to do so. With the help of a dog, a cat, a bird and a group of children, they defeat Brundibar and celebrate by singing a victory march. It was known in Theresienstadt that the character of Brundibar represented Hitler, and singing its climactic victory march was a thrilling rebuke of the horrors of life in the ghetto.

Despite its use as propaganda, Ela loved performing “Brundibar.” She had always loved to sing and was excited to be cast in the production at Theresienstadt. Ela said that music and “Brundibar” were everything to the prisoners, and that when she was singing all of her troubles disappeared. She told us that music brought joy and hope to a place where there was none.

Ela was 15 when she, her sister and her mother miraculously evaded Auschwitz and survived the war at Theresienstadt. After the liberation they returned to Prague, but Ela eventually moved to Israel, where she served in the army and Israel’s equivalent of the Secret Service. In Israel, she met her husband, Leopold, and eventually they moved to New York with their children.

“Brundibar” came into my life in 2016 during a performance arranged by the New Orleans Opera Association, the National World War II Museum  and Cantor Joel Colman of the city’s Congregation Temple Sinai.

I was honored to play Aninka, the sister. The production took place at the National World War II Museum on a stage set in a hangar with World War II-era planes strung overhead. Robert Lyall conducted an orchestra and a cast of children from the Greater New Orleans area. Most special of all, Ela attended the performances and addressed the packed audience after each show, sometimes joking and sometimes serious.

At 18, I was one of the oldest members of our cast (I could pass for much younger, a fact Ela found very funny) and initially I understood the weight of our task more than some of the younger kids. But Ela had a talent for storytelling and she shared her experiences in Theresienstadt with the cast before our dress rehearsal. She helped us understand the deep significance of our performances. At the end of each show, after addressing the audience, Ela joined us in an encore of the victory march, singing in Czech while we sang in English and wrapping her arms around as many children as she could reach.

I was heartbroken when I heard of Ela’s passing. Her presence at “Brundibar” performances around the world touched so many lives. Countless children learned about the Holocaust from Ela, and they were changed by her words and indomitable spirit. Ela made history come alive for us, and while it was sobering to learn the history behind the opera, Ela was a comforting presence not just to me but to countless other children worldwide.

“I always thought the opera died with the children, but when I hear it here in a reunited state, singing it by children free, it will never die,” she said in an interview for the USC Shoah Foundation.

This was the message of remembrance that she had kept throughout her life, and her eyes would always light up when we sang, for she was remembering her friends and we were bringing them back to life for her.

I treasure my copy of the book “The Cat with the Yellow Star,” a memoir for young adults she wrote with Susan Goldman Rubin in 2008. She wrote a message in my book: “Remember me and my friends, Love Ela.”

Annie Cohen is a college senior at Emory University, and is originally from New Orleans. She is an editorial entern for Modern Luxury magazines in Atlanta.
The views and opinions expressed in this article are those of the author and do not necessarily reflect the views of JTA or its parent company, 70 Faces Media.

child survivors of the holocaustCultureTheresienstadt