‘I’m not going to get stuck’: Ahead of the election, growing numbers of US Jews consider leaving

(JTA) — By 11:42 a.m. on the morning after Donald Trump refused to condemn white supremacists during the presidential debate, Heather Segal had received four inquiries from Americans interested in moving to Canada. Two of them were Jewish.

Segal, an immigration lawyer in Toronto, knows there’s always a spike in inquiries during U.S. election years. But in her 25 years of experience, it’s never been as big as it is now.

In 2016, she said, she received a couple dozen inquiries, total, from Americans looking to move to Canada. This year, she gets six or seven inquiries every day. And most of them, she said, are from Jews.

“In my life, I have never seen what I’m seeing,” said Segal, who is herself Jewish. She said she hears the same fears from one Jewish American after another.

She added, “Whatever it is, honestly, it gives me pause. What do I hear? ‘I never thought that I would be looking for this. I’m well established in the United States. My family is here, my business is here. This is not something I ever thought would happen or that I even considered.’ That line is not one person saying it. I hear it several times a day.”

Americans vowing to move to Canada after the presidential election is almost a cliche. Among observant Jews, the same might be said of moving to Israel — where most Jews get automatic citizenship — if the wrong person takes office or if conditions change in the United States.

This year feels different, say immigration lawyers and others who work in the small industry of Jews permanently crossing borders. Much of the drive to leave has to do with the prospect of President Trump winning reelection, potentially after a chaotic post-election period in which he or others dispute the results of the vote. American Jews, lawyers and advocates say, are also chilled by a climate of rising extremism and anti-Semitism, some of it stoked or condoned by the president.

Last year saw the most anti-Semitic incidents in the U.S. since at least 1979, according to the Anti-Defamation League. The past two years have seen lethal attacks on Jews in Pittsburgh; Poway, California; Jersey City, New Jersey; and Monsey, New York, plus a string of assaults on Jews last year in Brooklyn. Amid a rise in extremist activity, Trump has repeatedly declined to condemn far-right groups.

Longtime Jewish leaders who are seen as moderate are now comparing this moment in American politics to early 1930s Germany, when Hitler rose to power and the fate of the Jews in Europe began to be sealed. For members of a people who have never experienced lasting security under any government until the last century, the moment is awakening deep-seated anxiety about how to ensure their family’s safety if the worst comes to pass in the United States.

“There’s a lot that goes through my head while this is going on, about what was my family thinking as Hitler was rising to power?” said Sarah Morris, a lawyer in Colorado whose grandfather, originally from what was then Czechoslovakia, was the only member of his family to survive the Holocaust. 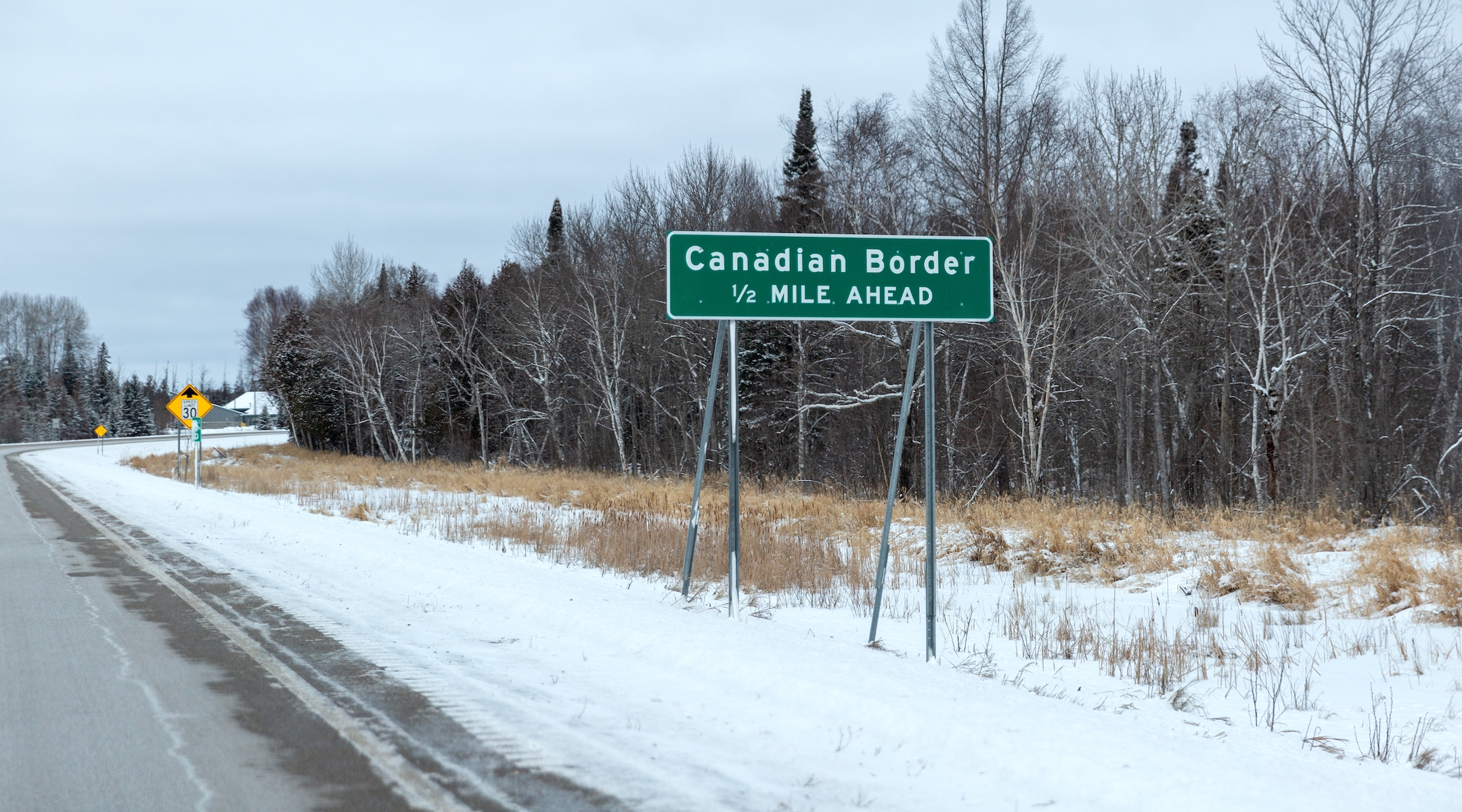 Morris is one of an increasing number of American Jews who are exploring finding a home outside the United States — whether in Canada, Israel or the European Union. She is eligible for Canadian citizenship and submitted her application in August, spurred by fear of what could happen on and after Nov. 3.

It is, of course, too soon to tell if the presidential election and its aftermath spark a wave of Jews and other Americans moving abroad. Certainly, most people who vow to emigrate over election results ultimately do not.

But Morris’ story reflects the anxiety that is shaping many American Jews’ thinking right now.

She and her wife have discussed getting a mobile home, partly in case they decide to leave home at a moment’s notice for a prolonged period of time.

“You think about those kinds of questions: What would be the triggering point that would cause me to leave the country?” she said. “It’s really challenging to know exactly what that tipping point should be. And I think I have a different sort of understanding of that challenge that our ancestors probably had to go through in deciding whether or not to go.”

Other Canadian immigration lawyers are seeing the same pattern.

Joseph Young, another Jewish immigration lawyer in Toronto, usually gets about two inquiries per week about moving to Canada. That number has jumped recently to at least five. And though Jews make up approximately 2% of the U.S. population, he estimates that about 20% of his inquiries are from Jews.

Nan Berezowski, another Canadian immigration lawyer, also said inquiries about leaving the United States have risen, though she couldn’t quantify the increase, and that at least 20% appear to be from Jews.

“Things in the United States are getting a little bit out of hand,” Young said. “If Trump wins, I think you’re going to see more people continuing and completing their [immigration] applications, or at least applying. They’ve lived through four years and they’re saying ‘I’m not going to live through another four years.’”

Moving to Canada is not simple. Applications for permanent residency are evaluated based on a points system that takes into account language fluency, age, profession and whether the applicant has previous connections to Canada, such as Canadian family or a Canadian academic degree. The process can take a year or more.

“If you speak English, you’re a graduate of a Canadian university and young, you’re a prime candidate for Canadian immigration,” said Greg Siskind, an immigration lawyer in the United States who is considering working on emigration from the U.S. as well, based in part on the rising number of people seeking to leave. “If you are older and middle class, you’re probably not going to have such an easy time.”

Another option available to some American Jews is also onerous: securing a European passport. A handful of European countries, owing to their histories of anti-Semitic persecution and expulsion, offer citizenship to Jews whose ancestors fled their borders. Austria widened its doors earlier this month.

On that front, too, interest appears to be on the rise. Hollander-Waas Jewish Heritage Services, an agency founded last year that helps Jews track down genealogical records and navigate the countries’ citizenship processes, is getting two to three inquiries about pursuing European citizenship per week, as opposed to one a month several months ago.

The founders, Caitlin Hollander and Michael Waas, have also both individually pursued European citizenship for themselves, for emotional and practical reasons. Hollander has obtained her German citizenship, while Waas is still in the process with Portugal, the homeland of his ancestors.

The irony of potentially seeking refuge on the continent where the Holocaust and centuries of anti-Semitism were perpetrated does not escape them. Both, however, said the idea of having an option outside of America was compelling at a volatile time.

She added, “It’s reclaiming something that had been stolen, and saying this was mine. You can’t take this. And to me, at least, it’s righting a wrong that was done in 1938.”

Israel, of course, represents a global redress for the wrongs done in that year and the following decade. Almost any Jew in the world is eligible under the Law of Return, which gives Jews the ability to claim citizenship in the country if they move there.

Right now, the number of American Jews seeking to exercise that right is on the rise. Nefesh B’Nefesh, which facilitates Israeli immigration, has seen double or triple the number of applications opened from the U.S. every month from May through September compared to the previous year. The number of completed applications, indicating a sustained interest, has also doubled or tripled every month. Even September, which saw skyrocketing COVID-19 case numbers in Israel, saw a 72% increase in completed applications compared to September 2019, to 523 people.

But a spokeswoman for the group, Yael Katsman, said most people completing the process had long been interested in moving to Israel and felt able to make the leap after their workplaces went remote because of the pandemic.

“The political unrest is not dominant at all,” she said.

That may be because Jews must actually move to Israel to gain citizenship, making it a perpetual and vital backup plan but not a first-line destination for Jews anxious about the political situation in America.

In contrast, citizenship programs for Jews in European countries don’t require applicants to live in the country. So for those who qualify, citizenship in Europe gives them a potential refuge while they see how things in the U.S. turn out.

“Especially this year, it’s been like, I need to have a backup beyond Israel because to have a Portuguese passport doesn’t necessarily mean you have to go and live in Portugal,” Waas said.

Hollander added, “It’s having multiple options, multiple routes, and that’s what a lot of people are realizing more and more.”

A move abroad appeals even to Jews who don’t fear direct, physical danger following the election but worry that another Trump term will transform the U.S. into a place that does not reflect their values.

Jeremy, an educator in Pennsylvania who has focused his energies on teaching immigrants and underprivileged students, has found himself recently searching Canadian job boards and researching the cost of living in different Canadian cities. He said Canada is appealing because life there seems relatively similar to the U.S., but that the country appears to care more for marginalized groups, which is important to him as a Jew.

“I knew from a young age that I’m different because I’m Jewish,” said Jeremy, who did not give his last name due to concerns regarding privacy and job security. “That makes us able to understand certain things, to live certain fears that we have or that pretty close ancestors of ours have had in this country or in other countries. That very directly relates to how I feel about immigration. That very explicitly relates to how I feel about systemic racism.”

Segal, the Canadian immigration lawyer, said the rising number of people seeking to leave the U.S. is “devastating to see,” despite the uptick in potential business for her. She’s always looked at the United States as an inspiration. Now she views it with fear and concern.

“It saddens me because, you know, I love America and what it stands for and what it’s accomplished,” she said. “I keep saying to myself, what is going on in America? Because I see a lot of fear and I feel like we’re at this stage [where], the fear, we don’t know what it’s going to bring.”

The post ‘I’m not going to get stuck’: Ahead of the election, growing numbers of US Jews consider leaving appeared first on Jewish Telegraphic Agency.