Ilhan Omar’s tweets alienated her district’s Jews. Can they still work with her?

(JTA) — Jewish leaders in the Twin Cities were worried that Ilhan Omar had repeated an anti-Semitic stereotype. So about half a dozen of the Minnesotans met with her for two hours at a colleague’s home.

That was last year. Omar, at the time a Democratic state representative, had posted a now-infamous tweet in 2012 claiming that Israel had “hypnotized the world.” So State Sen. Ron Latz hosted an intimate meeting at his home, aiming to explain how a term like “hypnotized” echoed anti-Semitic themes, to prevent future tweets of that nature and to nurture a good relationship with Omar as her career advanced.

But the participants were not reassured.

“I was a bit troubled — all of us were a bit troubled — by the conversation we had with her,” Latz, a Democrat, told the Jewish Telegraphic Agency on Wednesday. “She didn’t apologize for the tweet, she didn’t say she would take it down and she tried to put in in the context of the Gaza dispute, but it was unsatisfactory from our standpoint, from my standpoint, that she didn’t seem to recognize the seriousness of the trope.”

Now Omar is the congresswoman representing a Minneapolis-area district with a large Jewish population in and around the suburb of St. Louis Park. And she again has tweeted something widely criticized as anti-Semitic, saying that the American Israel Public Affairs Committee pays lawmakers to be pro-Israel.

That leaves Latz and other local Jewish leaders to worry that the 2012 tweet was not a one-off but rather indicative of an anti-Jewish attitude. They say they will still dialogue with her. But they are wondering how best to keep working with their representative after she echoed another offensive stereotype, this time about Jews and money.

“These are lines that have deep negative meaning for Jews throughout history,” Latz said. “She’s getting them from somewhere and she’s using them. At some point I become concerned that her use of them isn’t just out of ignorance of their implications but indicative of more deeply ingrained attitudes.”

Steve Hunegs, the director of the Jewish Community Relations Council of Minnesota and the Dakotas, said Omar’s tweeting “casts a shadow on our relationship.” Rabbi Marcia Zimmerman of the Reform Temple Israel in Minneapolis said the tweets “are creating a break in trust.” Rabbi Avi Olitzky of the Conservative Beth El Synagogue in St. Louis Park said he is less concerned about Omar’s tweets “and more concerned about her having those thoughts in the first place.”

JTA has reached out to Omar’s office to comment.

To recap the controversy: In two tweets on Sunday evening, Omar suggested that money motivates U.S. politicians’ support for Israel. Then she said that money comes from AIPAC, the pro-Israel lobby. (AIPAC lobbies for pro-Israel policy, but doesn’t donate to candidates or endorse them. Its members, however, give to political campaigns as individuals and as members of pro-Israel PACs.)

Leaders of both parties denounced Omar for invoking the Jews and money trope, and she apologized. President Donald Trump called on her to resign.

“Anti-Semitism is real and I am grateful for Jewish allies and colleagues who are educating me on the painful history of anti-Semitic tropes,” Omar wrote Monday in her apology. “We have to always be willing to step back and think through criticism, just as I expect people to hear me when others attack me for my identity. This is why I unequivocally apologize.”

Jewish leaders hope there’s a path forward. Hunegs, who met with Omar last year, said that aside from the tweets and disagreements on Israel, Jews in Omar’s district identified with her story as a leader from an immigrant community — something Jews were a century ago. Omar, a refugee from Somalia, came to Minnesota with her family in her early teens.

Both Omar and Hunegs’ group, the JCRC, support expanding social services. The JCRC also worked with Omar’s predecessor, Keith Ellison, even though they clashed on Israel issues. 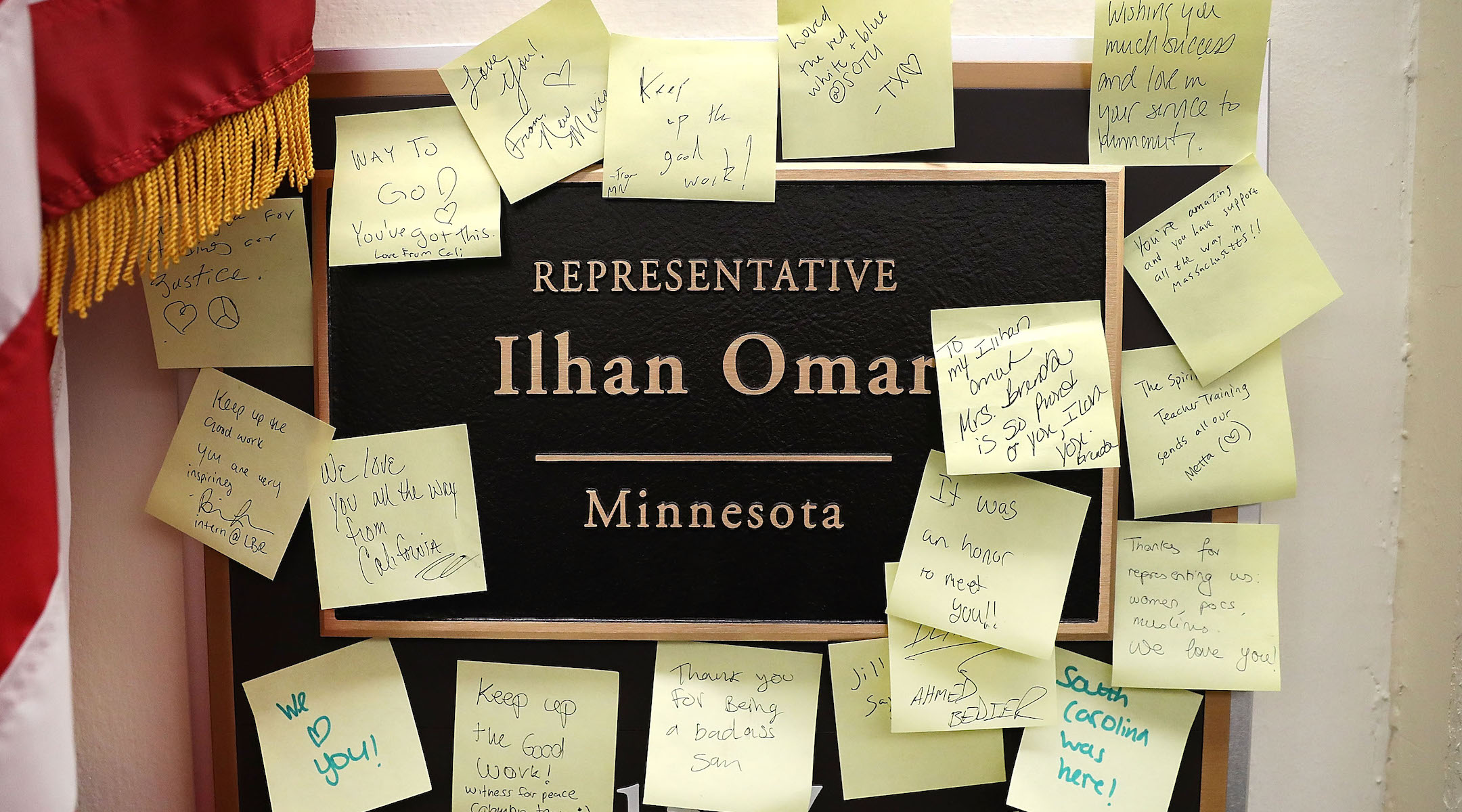 Notes of support are posted on the name plate outside Omar’s office in the Longworth House Office Building in Washington, Feb. 11, 2019. (Mark Wilson/Getty Images)

Omar does have Jewish support.

Carin Mrotz, executive director of Jewish Community Action, a local liberal Jewish group, acknowledged that the tweets echoed anti-Semitic prejudice, but said the first-term congresswoman was no anti-Semite. Mrotz spoke with Omar on Tuesday morning and said the lawmaker had hoped to shine a light on the influence of money in politics.

“I do not think Rep. Omar is an anti-Semite,” Mrotz said. “I think that anti-Semitism is such an ancient and structural oppression that it creeps into our language and it creeps into the expressions we use in an insidious way, the same way racism and sexism do.”

Rabbi Zimmerman said the focus on Omar’s tweets also comes amid a climate of rising anxiety over anti-Semitism.

“I have gotten more phone calls, emails, texts around this tweet of hers than around anything else that has happened,” she said. “Everyone is feeling a bit worried and concerned, on her other tweets and the world overall.”

Olitzky, the Conservative rabbi, feels that part of the problem is the medium, not the message. The Israeli-Palestinian conflict is difficult to talk about anywhere, he said, but especially on Twitter.

“We’re living in a period of time where nuance is not only neglected but rejected, and I think when we share not only our reactions but expressions of philosophy and ideology in but a few virtual characters, we contribute to that neglect of nuance,” Olitzky said. “Relationships are built upon nuance, and conflict is waged over the absence of it.”

The tweets worry Olitzky. But as a constituent of Omar, the rabbi said he’s going to keep trying to work with her.

“That’s the nature of politics,” he said. “Irrespective of conflict, we have to march on. She is who we have as our elected official, she is our representative, so I have to do my best to help her understand the definition of representing my lens on the world.”