Ilhan Omar gets a coveted spot on the Foreign Affairs Committee, and House Republicans slam Democrats 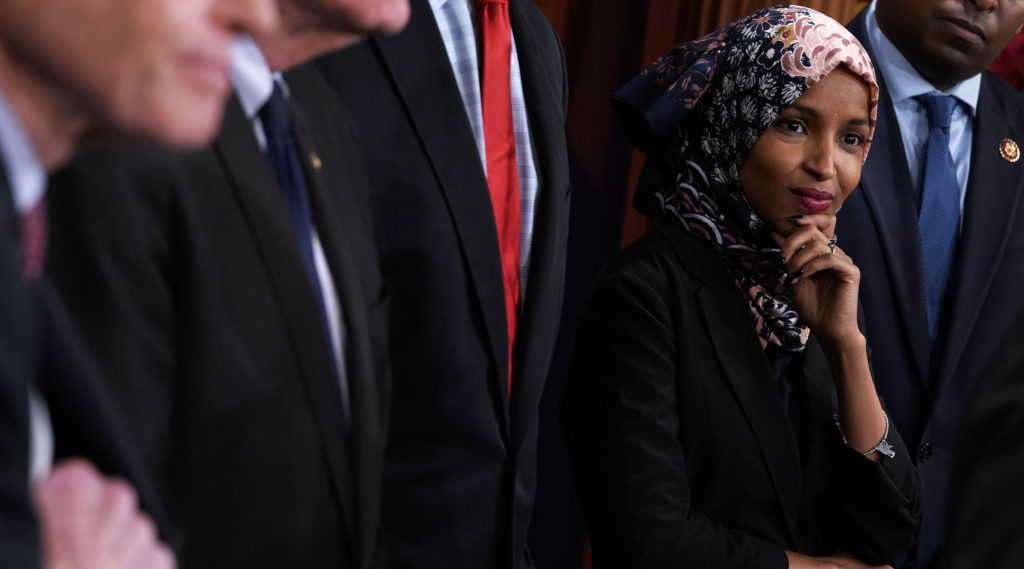 WASHINGTON (JTA) — Rep. Ilhan Omar, a Democrat from Minnesota, was named this week to the House Foreign Affairs Committee, a significant “get” for a first-term lawmaker and an assignment that will make for some interesting theater.

Omar is one of two new members of the House who openly back the Boycott, Divestment and Sanctions movement targeting Israel. The Foreign Affairs chairman is perhaps the pre-eminent pro-Israel Democrat, Eliot Engel of New York, and the committee has been a redoubt of pro-Israelism for decades.

Rep. Lee Zeldin, R-N.Y., one of two Jewish Republicans in the U.S. House of Representatives and his party’s most outspoken pro-Israel member, is on the committee and was not happy with the news.

House Minority Leader Kevin McCarthy put out a statement on Omar, calling it “disgraceful” to seat “a member who has a documented history of making anti-Semitic and anti-Israel remarks.”

Rep. Ted Deutch, D-Fla., who is Jewish and chairs the committee’s Middle East subcommittee, welcomed new members, including presumably Omar, to the committee.

“Let’s continue the proud bipartisan work of the committee in promoting American values and defending human rights around the world, standing firmly with our allies and against our enemies,” he said.

Perhaps Omar’s most damning statement on Israel was in 2012: Watching that year’s Gaza war, she said on Twitter, “Israel has hypnotized the world, may Allah awaken the people and help them see the evil doings of Israel.” She has insisted that the tweet was solely aimed at Israel, but many felt the coupling of hypnotism and evil echoed themes of sinister Jewish control.

Omar delivered mixed messages about that tweet over two days this week in separate interviews with CNN. Speaking Wednesday to Christiane Amanpour, she described “those unfortunate words as the only words I could think about” — adding that her criticism of Israel stood, but she understood that her words could be seen as “attacking, particularly people of faith.”

The next morning, asked the same question by the network’s morning crew, Omar’s tone was strikingly different.

“That’s a really regrettable way of expressing that,” she said of the question, which asked what she made of the offense taken by Jewish Americans. “I don’t know how my comments would be offensive to Jewish Americans … I am clearly speaking about the way the Israeli regime was conducting itself in that war.”

Two top former officials of the American Israel Public Affairs Committee had different takes on what it meant to have Omar on the Foreign Affairs Committee. Josh Block, The Israel Project CEO and a former top AIPAC spokesman who once was involved in Democratic campaigning, was appalled.

“Totally unnecessary choice by House @TheDemocrats that embraces and encourages moral hazard,” Block wrote on Twitter. “What message does it send? Make vile anti-Zionist, anti-Semitic remarks, support destroy Israel movement after denying it to Jewish community in campaign, and get Foreign Affairs Committee?” Omar suggested at a Jewish forum during the campaign that she saw BDS as counterproductive — then embraced it after she was elected.

Lenny Ben-David, a top AIPAC official in the 1980s and an Israeli diplomat in the 1990s who is now director of publications with the Jerusalem Center for Public Affairs, called on folks to calm down.

“I don’t get the panic over Rep #IlhanOmar on the Foreign Affairs Committee? Cool it!” he said on Twitter, predicting that Omar might not last longer than a single term.

Ben-David named a number of past Israel-hostile lawmakers, including William Fulbright of Arkansas, who chaired the Senate Foreign Relations Committee from 1959 to 1974 — and Israel thrived nonetheless.

“The Pavlovian reaction by some political observers, Jewish activists, and haters only garners her more attention,” he said. “Plan and recruit for 2020 instead.”

The most striking part of the Amanpour interview was not Omar’s seeming regrets for her language, but how the questioner set up the question.

“Can I just move on to something that’s generally a rite of passage for politicians in the United States, and that it is to express fealty or pay homage to AIPAC,” Amanpour said.

Amanpour’s framing, suggesting that the pro-Israel lobbying group has a lock on lawmaker’s loyalties, has been challenged by recent developments. More than half of the Democratic caucus in both chambers of Congress are endorsed by AIPAC’s rival, J Street, and a significant minority among Republicans (including Trump) prefer to deal with organizations to AIPAC’s right on Israel issues.

The other big Omar news this week (it’s been an Ilhan Omar kind of week) was a tweet she sent about Sen. Lindsey Graham, the South Carolina Republican who went from being sharply critical of Trump before the presidential election to one of his closest congressional allies.

“They got to him, he is compromised!” she said, quoting another tweet in which someone wondered “what they have” on Graham.

There was much back and forth on social media over whether Omar was insinuating Graham was a closeted gay man. She insists she was not.

That may be the case, but in both her 2012 tweet about Israel “hypnotizing” the world and her claim that Graham is being blackmailed, Omar seems to reflexively embrace the language, if not the substance, of conspiracy theories. Instead of interrogating why folks may have different views, she attributes differences of opinion to sinister forces.

Now that should make for some really riveting Foreign Affairs Committee theater.