If Israel has such bad PR, why does it remain so popular? 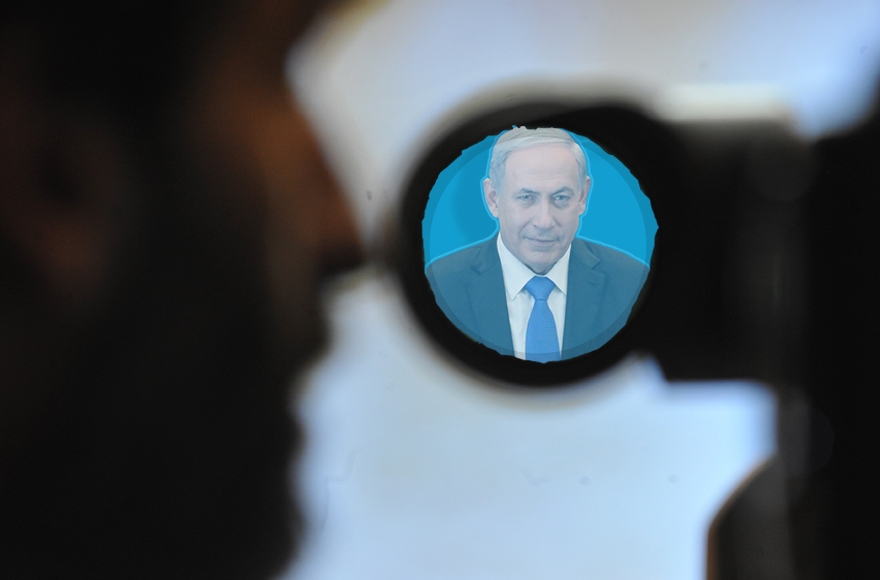 Prime Minister Benjamin Netanyahu understands that Israel’s “hasbarah” can only get the country so far. (Illustration by Charles Dunst/JTA; photo: Michal Cizek/AFP/Getty)

(JTA) — The first mention in JTA of the Hebrew word “hasbarah” was in 1988, at the height of the first intifada. The article focused on Israelis and American Jews and their deep concern that the media were distorting the unrest and showing the Israeli military in a bad light.

The answer, interviewees agreed, was better “hasbarah” — a Hebrew word, explained the author (OK, it was me), “whose meaning falls somewhere between information and propaganda.”

Fast forward 30 years. Writing last week in the Los Angeles Times, Noga Tarnapolsky makes a convincing case that Israel’s public diplomacy efforts are flawed, unprofessional, scattershot and out of touch. Critics tell her that Prime Minister Benjamin Netanyahu relies too much on social-media videos to defend Israel. They say its military spokespeople are ill prepared to answer questions about controversial events, like May’s deadly riots on the border with Gaza.

““There is … no single authority that coordinates and supervises these various activities,” complains Michael Oren, who is (wait for it) Israel’s deputy minister in charge of public diplomacy.

The critics, however, don’t make a convincing case why any of this matters.

Complaints about Israel’s hasbarah efforts are as regular and ritualistic as the Jewish holidays. Without answers from a strong PR campaign, the theory goes, the litany of anti-Israel charges gains traction.

But among whom? Israel remains hugely popular among the American public. According to Gallup, 64 percent  of the U.S. population sympathizes with the Israelis over the Palestinians, and only 19 percent say they sympathize more with the Palestinians. Congress remains firmly pro-Israel. Yes, a Pew survey in January showed a wide partisan divide over Israel, with 79 percent of Republicans and only 27 percent of Democratic sympathizing more with Israel than with the Palestinians. But the poll questions forced respondents to choose between Israelis and Palestinians (why not both?), and the results may have reflected only the deeply partisan nature of American politics — not anything you can hasbarah away.

Despite wide publicity and Jewish consternation, the Boycott, Sanctions and Divestment movement hasn’t taken root outside the far left. As of June, 25 states have enacted anti-BDS laws. In fact, the whole point of BDS is that Israel has a positive image that needs to be undermined. You wouldn’t know about BDS if celebrities didn’t regularly include Israel on their world tours.

The charge of “pinkwashing” —  that Israel touts its relatively progressive record on LGBT rights to distract the world from the occupation — targets what the BDS folk think is a positive and effective means of hasbarah — otherwise, why would they bother? And paradoxically, every charge of pinkwashing only reminds the casual reader of Israel’s strong LGBT record.

The first is convinced that the media have in it for Israel. Such critics also hold the mistaken notion that the media’s role is to tell a story as they would have it told. Coverage of the Israeli-Palestinian conflict is hardly perfect, and examples abound of stories becoming stories only when Palestinians are the victims, or headlines that ignore cause (a terror attack) for effect (the Israelis’ response). In general, however, Palestinians have a point when they complain that the media often shape the narrative according to an Israeli point of view, depicting Palestinian life with an Israeli gaze. If you want to see what coverage of the conflict would look like otherwise, read a pro-Palestinian website like Electronic Intifada or a far-left Israeli site like +972. It’s nothing like the Israel coverage you see in the mainstream media.

The other kind of critic blames unpopular policy on bad hasbarah. Good hasbarah, they insist, could presumably have forestalled the brouhaha over the Israeli nation-state law (a brouhaha, I’d wager, that most Americans never even heard about). That story got legs not because of a bad marketing rollout, but because the law was a policy decision that fed directly into a perception that Israel’s right-wing government was growing less democratic and more nationalistic.

Passage of the law capped a week in which the Knesset allowed the education minister to bar groups critical of government policies from speaking in public schools, made it harder for Palestinians to win land disputes and blocked single men and gay couples from having children through surrogacy. More broadly, Netanyahu’s close ties with President Donald Trump may be understandable and justifiable, as his outreach to European nationalists, but there is a political and PR price to be paid for such embraces.

Netanyahu has good instincts for English-speaking audiences, and sometimes he realizes that a positive pitch can only get you so far. In the past few weeks, left-wing activists have complained that Israeli airport security have detained them and asked specifically about their activism and their political beliefs. On Monday, after the liberal Zionist writer Peter Beinart said he was stopped and interrogated, Netanyahu issued a statement saying it was an “administrative mistake,” adding that “Israel is the only country in the Middle East where people voice their opinions freely and robustly.”

The latter statement is a staple of pro-Israel hasbarah. It’s a terrific policy, as long as it has the added benefit of being true. But when actions prove unpopular, PR won’t save you. The root meaning of hasbarah is “explanation,” not “alchemy.”