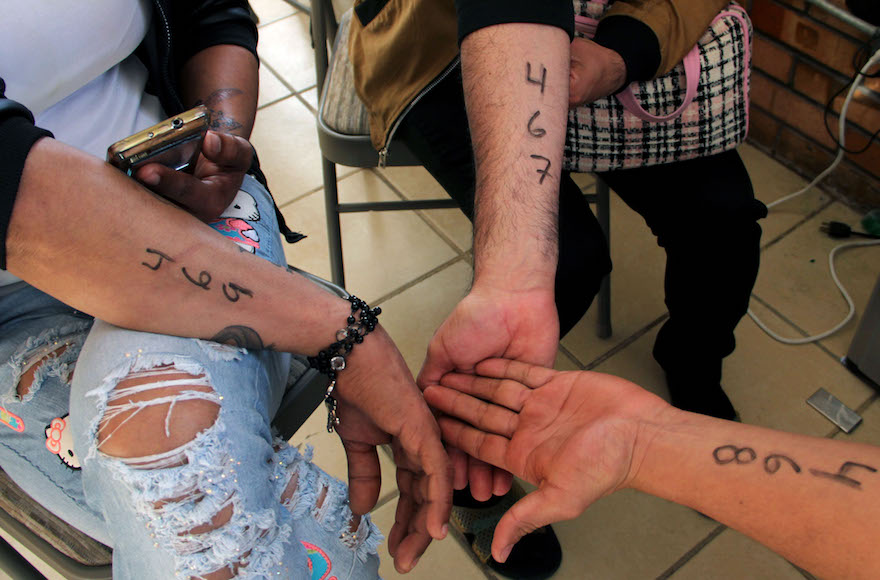 (JTA) — Asylum-seeking migrants waiting in Mexico to gain entrance to the United States are having tracking numbers written on their arms in permanent marker, recalling the Holocaust when concentration camp inmates were tattooed with numbers.

Accounts vary on when and who started the numbers-tracking practice in Mexico, but it has become a part of the process for asylum seekers at one of the U.S. ports of entry, in El Paso, Texas, Yahoo News reported Friday. Children are included in the process, according to the report.

Grupos Beta, the humanitarian branch of Mexico’s federal immigration agency, whose mission is to offer assistance and protection to migrants, uses a list of these tracking numbers to help take care of the asylum seekers. The numbers were first spotted by Yahoo News while the migrants were waiting to be questioned by Grupos Beta.

More than 6,000 people reportedly are waiting at the border with Tijuana, Mexico, to gain asylum in the United States, most fleeing violence in Central America.

Migrants fleeing oppression are dehumanized by numbers on their arms in Jaurez shelters after being blocked from entering the US legally. Border Patrol is ignoring asylum seeker human rights, dumping responsibility on Mexico. Chilling image that mirrors the tattoos of Auschwitz. pic.twitter.com/KW5GnTP0Sk