I enjoyed the Belgian carnival that featured anti-Semitic floats. Then I searched for homes in Israel.

AALST, Belgium (JTA) — I probably spend an unhealthy amount of time thinking about the Holocaust.

Partly as a consequence of covering Jewish news in Europe at a time of rising anti-Semitism, Holocaust associations often come to mind in my daily life — on crowded trains, for example.

But I never thought I’d have a conversation end with these words: “I have to hang up now, the Gestapo is coming.”

That moment came Sunday at the Aalst Carnival, an annual costume parade that takes place in this small city about 10 miles west of Brussels. The parade, a cherished tradition here celebrating Lent, the 40-day period ahead of Easter, has become controversial for some of its participants’ tradition of mocking Jews and the Holocaust.

I was on the phone with Joel Rubinfeld, the president of the Belgian League Against Anti-Semitism. His quote was referring to a group of revelers wearing shiny black long coats and red armbands that were clearly meant to evoke the Nazi uniform. He had to hang up to document the display for the group’s records.

It was, I think, the only reference this year to Nazis at the parade. But caricatures of Jews, including costumes depicting them as insects, were a prominent element in the procession of floats and even among spectators.

Some wore costumes, which many people found offensive, of haredi Orthodox Jews with fake sidelocks, exaggeratedly large fur hats and ant abdomens attached to their backs. The reason for the ant costumes, one participant explained to me, is that the Dutch word for Jerusalem’s Western Wall sounds like “complaining ant.” They wore a sticker reading “obey” on their lapels and pushed a float shaped like the Western Wall.

Did the parade-goer understand how some observers could be shocked by what looks like a reference to the rich history of depicting Jews as vermin in Nazi and other anti-Semitic propaganda?

“This is just a joke, and we can joke about whatever we want here,” said the man, who said he was 26 years old and working in computers. He identified himself as Fred van Oilsjt — a name that I believe was a joke, as Oilsjt is how his city’s name is written in the local dialect.

Another float, driven by men wearing haredi costumes, fake hooked noses and silver face paint, featured a large parchment sign proclaiming six “regulations” handed down by the made-up “Jewish festival committee.” They include “No Jews in the procession; no mocking Jews; don’t ever tell the truth about the Jew; what the Jew wants will happen; all drugs and black money is ours.” 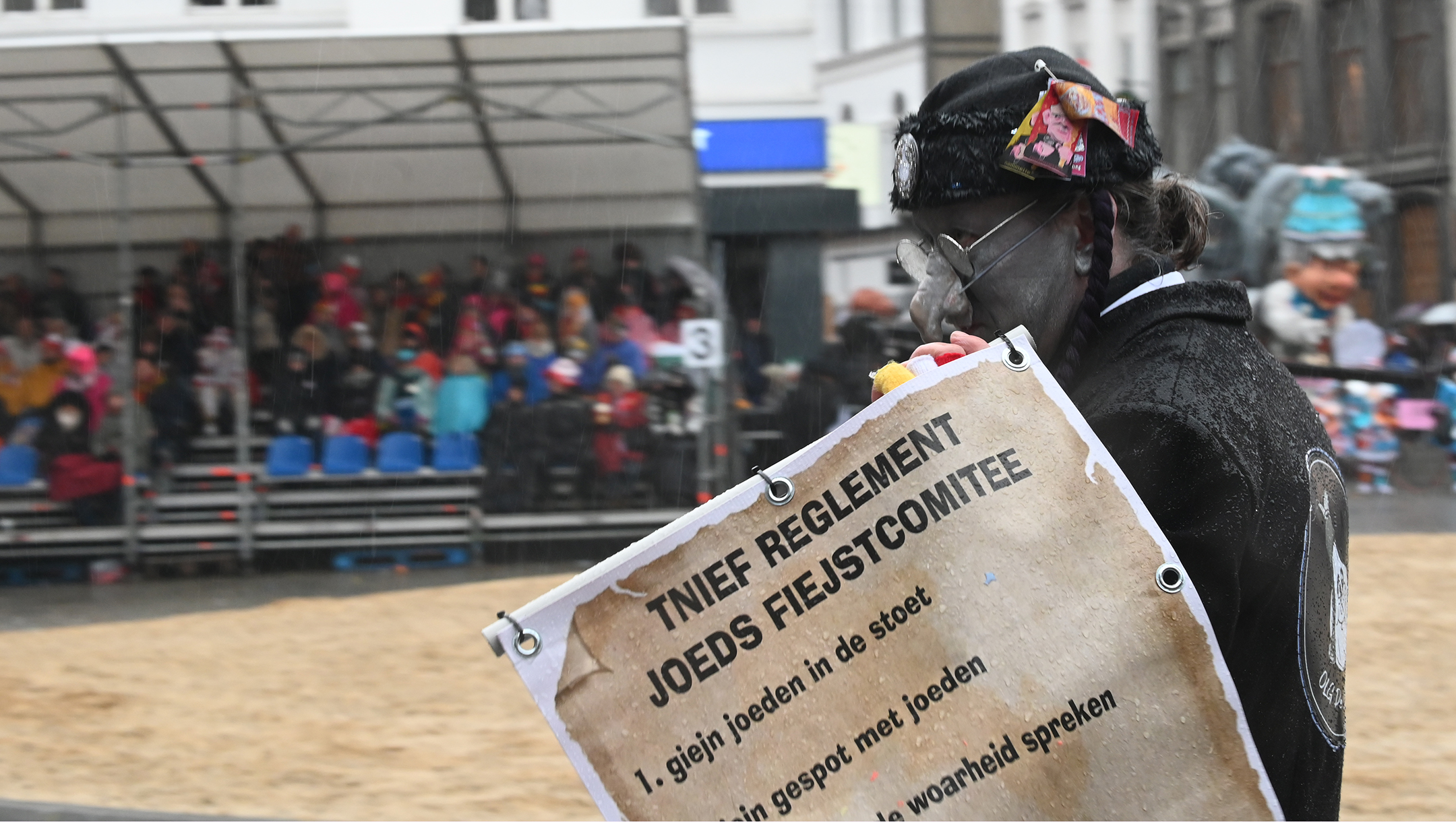 A man wearing a fake hooked nose and carrying a sign warning readers not to “tell the the truth about the Jew” at the annual procession of the carnival in Aalst, Belgium, Feb. 23, 2020. (Cnaan Liphshiz)

The 10 men responsible for the float waited to join the procession under a bridge, where they drank lots of beer and danced to a playlist that combined German heavy metal rock — the kind favored by neo-Nazis — with traditional Jewish tunes like “Hava Nagila.”

This was far from the first time that parts of the Aalst Carnival have presented displays that were deemed anti-Semitic. In 2013, participants dressed like Nazis walked around wearing cans labeled “Zyklon B” — the poison that the Nazis used to kill Jews in gas chambers.

Last year, one float featured two effigies of haredi Jews holding bags of money. One had a rat on his shoulder.

The float spurred UNESCO to strip the carnival of its credentials as a world heritage event. The group that prepared the float insisted that it wasn’t meant to offend.

Dismissing any historic context of how Jews were caricatured in pre-Holocaust Europe, parade organizers have defended the rat display and others as harmless satire. But to Jews, the displays here are jarring not only because of the stereotypes they betray, but also because they indicate how the borders have shifted on what can be said about Jews in the places where they were murdered or hunted down only 75 years ago.

For many of us, it is this deeper shift — not as much the imagery that reflects it — that’s making us doubt our future in Western Europe.

Some participants protested what they found to be anti-Semitic messages at the carnival. Greet Stevens, a middle-aged Christian woman from Brussels, came to the parade wearing blackened goggles, symbolizing her “critical view” of what she called “cheap attempts to hurt and provoke Jewish people.” 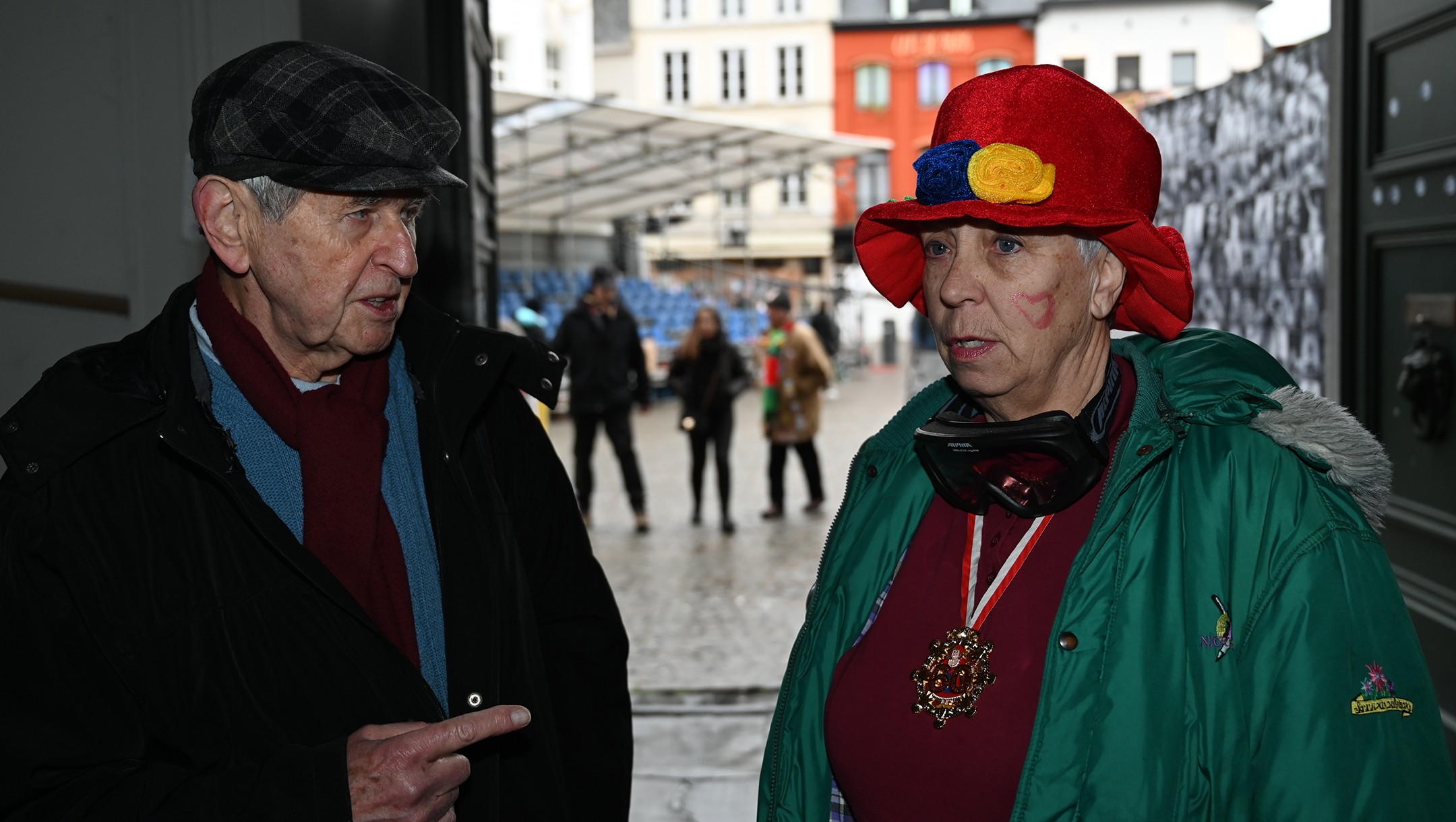 The leader of the group with the hooked noses, Giovanni van de Boek, a 41-year-old catering chef, was reluctant to speak to me about his float’s message and sign.

“You could call it a protest,” he told me. “Call it whatever, I don’t really care.”

Amateurs, most of them upstanding citizens with families and jobs, slave for months each year to prepare the parade’s 150 or so floats in time for the carnival, a 93-year-old event that is part of a long tradition with religious roots that takes place across Catholic Europe.

Many floats have spectacular and sometimes hilarious artworks celebrating creativity and humor, with wordplay and caricatures of local politicians. Some have children’s choirs and others boast brass bands that produce delightful shows. They wow and please the spectators, mostly families, who watch the floats show off to a jury at the main square of this city of about 80,000 residents. Winners are chosen in several categories. 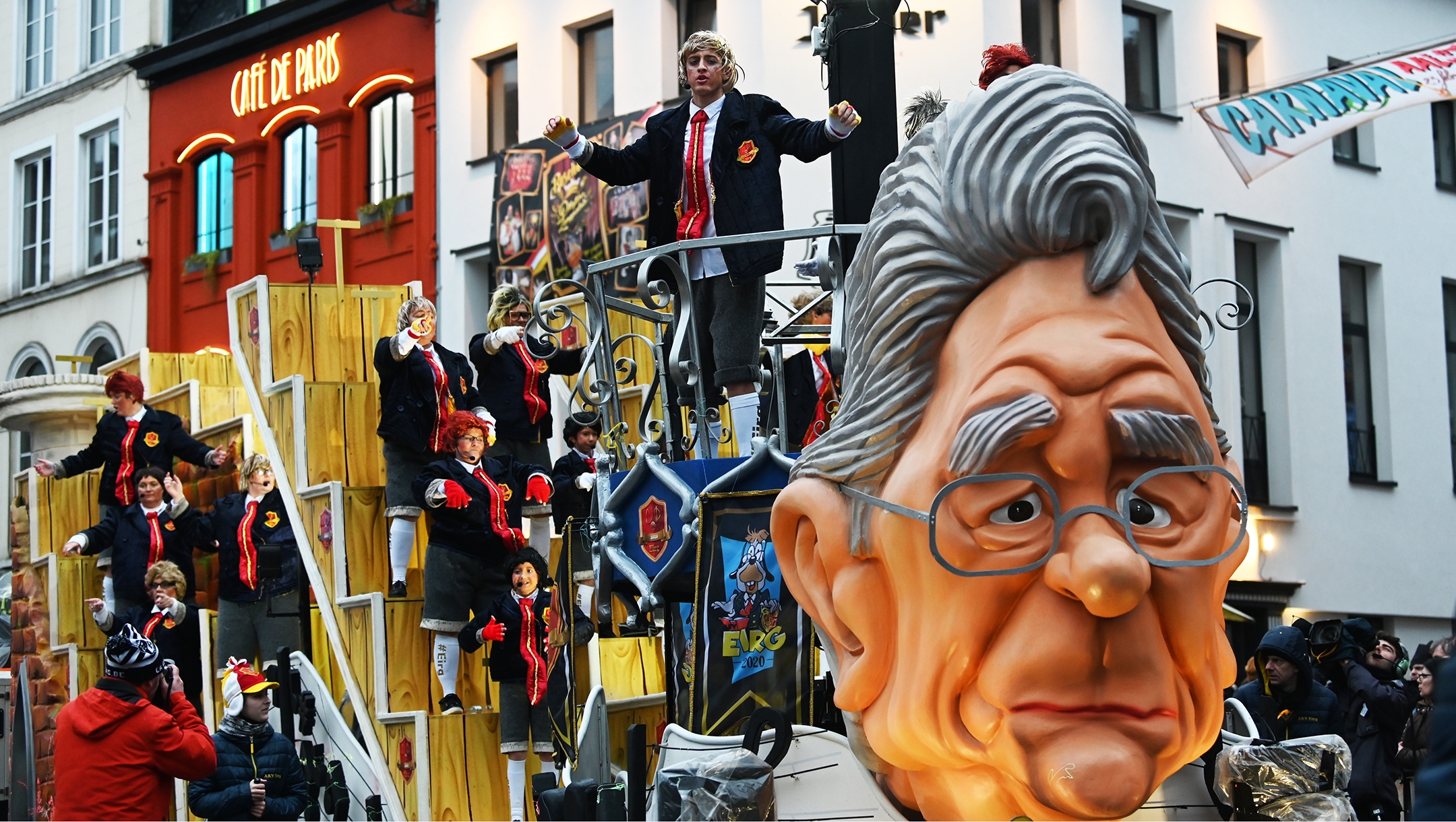 Most of the floats have no racist overtones at the annual carnival in Aalst, Belgium, including this one pictured there on Feb. 23, 2020. (Cnaan Liphshiz)

Those were not the displays that I and about 50 other colleagues from the local and international media came to find in Aalst this weekend. Following the uproar of last year, we came mostly for the handful of floats with allegedly anti-Semitic content and the 10-or-so floats meant to protest the UNESCO delisting. We shared information of where to find them.

Aalst Mayor Christophe D’Haese reproached us for this.

“I read your reports from the Aalst Carnival, and it made me wonder whether we’re attending the same event,” he told reporters at a news conference that he called a few hours into the event after condemnations began pouring in.

A few hours earlier, the mayor posed for pictures against the float that read “don’t ever tell the truth about the Jew.” D’Haese had also defended the 2019 display when UNESCO called it anti-Semitic, saying the condemnation “takes the display out of the context, which is one of satire.”

He has additionally stressed how the Aalst Carnival mocks Christians, Muslims, Asians and blacks, whereas the outrage is only over mockery of Jews. (His point is true: Some floats featured Asians with screw heads for eyes and black people with exaggerated lips.) 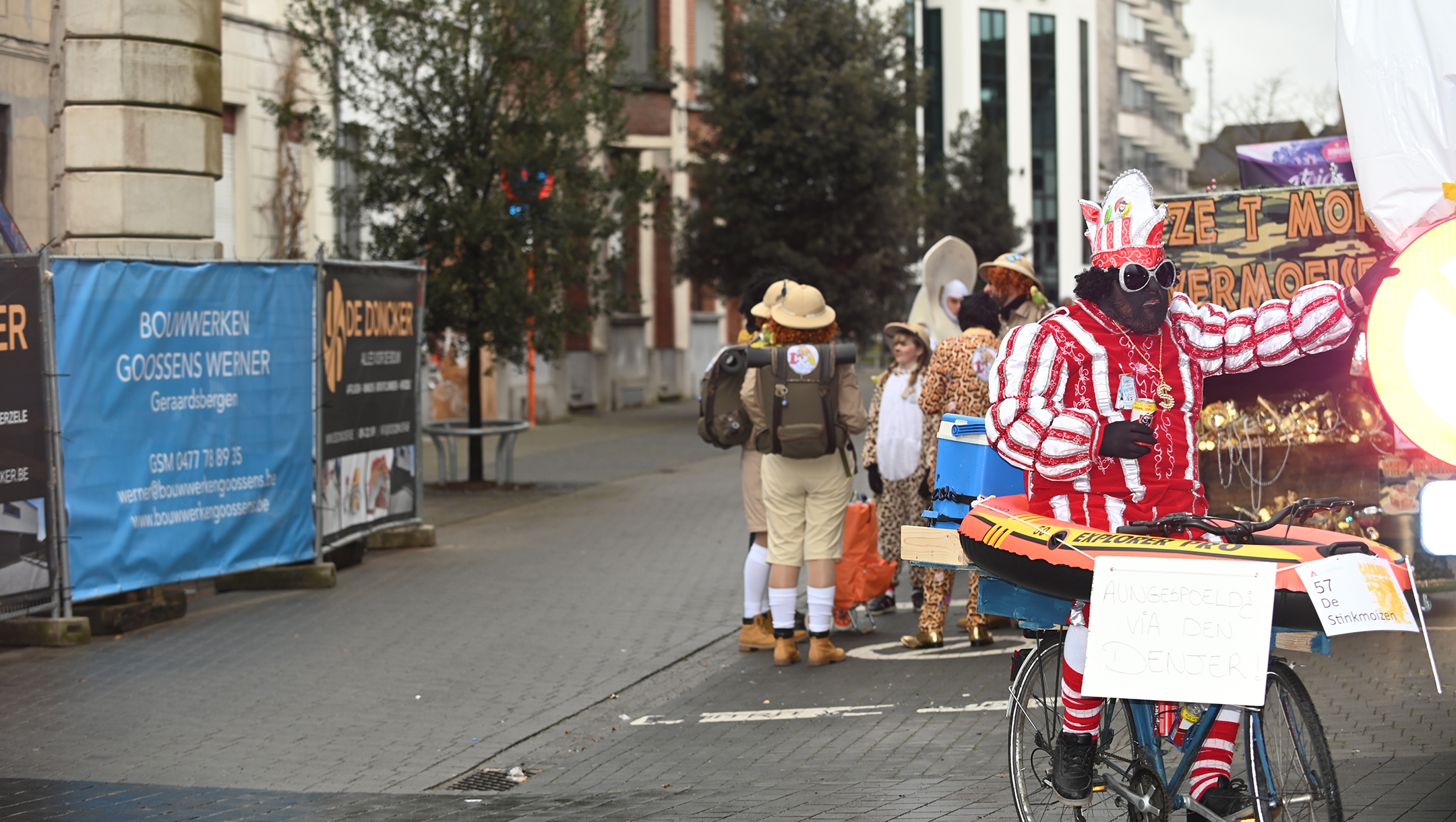 A man wearing blackface at the annual procession of the carnival in Aalst, Belgium on Feb. 23, 2020. (Cnaan Liphshiz)

Rubinfeld, the anti-racism activist, told me he thinks the mayor made “a huge miscalculation” by refusing to stamp out Jewish references in the 2020 parade.

If that’s true, the effects were felt far beyond the barrel.

Following the carnival, Rabbi Binyomin Jacobs, the chief rabbi of neighboring Holland, told me that he dreamed on Sunday night that he was forced to decide whether to warn his congregants to leave the Netherlands — an issue he’s been struggling with for several years. In the dream, he felt the weight of leadership that rested on Jewish community leaders in the 1930s and 1940s, he said.

“We’re not there yet, I’m not sounding that alarm yet,” he said. “We can live and prosper in Europe. But the fact that it’s even on my mind is a new development that scares me.”

I have my own fears, with which I’ve been grappling for years living in Amsterdam and revisited following the Aalst Carnival. If depicting Jews as insects is now permissible just outside the capital of the European Union, whereas it was unthinkable just 20 years ago, who knows what things will look like 20 years from now?

At point during the event, my Belgian colleagues became aware of my presence there — perhaps because my reporting on last year’s edition was a key factor in the uproar that led to the UNESCO delisting.

“Do you think this is an anti-Semitic event?” one Belgian colleague asked me.

It isn’t, I said, but it does have anti-Semitic elements that make me feel uncomfortable. I don’t support banning it because I believe in freedom of expression, I added.

I’m actually having a good time here, I told my colleagues, adding that my main regret is that my kids can’t enjoy it with me.

And I meant it. I’m considering taking them here next year because they’d have a blast and wouldn’t even notice the handful of Jewish references that I and my colleagues had sought out.

One wrinkle: I’m not so sure we’ll be in Europe next year.

Not for the first time in recent years, I found myself looking at housing options in Israel on the train out of Aalst.

With each new incident that reflects the mainstreaming of anti-Semitism in Western Europe, I’m increasingly considering the merits of moving my family to the Jewish state.

For all of the problems in Israel, at least events like the Aalst Carnival amount to little more than a bad joke somewhere far away.