(JTA) — Europe’s two kosher foie gras factories aren’t in France, by far the leading consumer of the fatty liver product. Nor are they in England, home to Europe’s second-largest Jewish population.

Instead, they are both in Hungary — where there are few Jews and no more than half a dozen kosher eateries in total.

Part of the reason may have to do with Hungarian Prime Minister Viktor Orban’s reputation among his many critics for weaponizing xenophobia — including against Jews.

The European Union has grown increasingly critical of Orban, condemning his refusal to admit asylum seekers, erosion of the judiciary’s independence and, most recently, making it illegal to share information about homosexuality with minors.

But Belgium, where the EU is based, recently banned the production of kosher and halal meat — and the EU’s top court recently upheld the ban.

The saga provided the Orban government with a fresh opportunity to level allegations of civil rights violations at his detractors similar to the ones they are flinging at him, while presenting Hungary as the guardian of liberties that are being curtailed elsewhere in Europe.

The bans and ruling on them are “not just an attack on religious freedom, but an attack on our Judeo-Christian heritage and the Jewish communities in Europe,” Orban wrote earlier this year to Israeli President Isaac Herzog.

“Consequently, my government has quickly condemned this harmful decision, and we will do our utmost to raise our voice against it in all possible international fora.”

Hungary has been doing more than advocating against restrictions on kosher slaughter, or shechitah. It also gives substantial government subsidies and concessions to kosher slaughterhouses that operate within the country.

The subsidies, combined with the animal-slaughter policies elsewhere in Europe and the supply chain interruptions induced by the COVID-19 pandemic, has turned Hungary into an unlikely major producer of kosher meat for consumption in Europe and Israel. Among its slaughterhouses are the only two devoted to kosher geese in Europe.

The Orban government’s opposition to bans or severe limitations on kosher slaughter, which animal-rights advocates have succeeded in putting on the books in at least seven European countries, date back at least to 2014, when Ferenc Kumin, a senior government spokesman, vowed to oppose any efforts toward bans locally.

Following the ban in Belgium, a large slaughterhouse for chickens relocated last year from Antwerp to Hungary to stay in business. And when the COVID-19 pandemic caused a shutdown of kosher slaughterhouses in the United Kingdom, the ones in Hungary upped production and one of the abattoirs for geese, Kosher Poultry in the village of Csengele about 75 miles southeast of Budapest, switched to poultry to alleviate the shortages.

England and France “provide for us with the consumption of our kosher products” yearlong, Slomo Koves, a rabbi from Budapest whose group, EMIH, supervises kashrut at Kosher Poultry, said at the time. “Now it is our turn to look after them.” 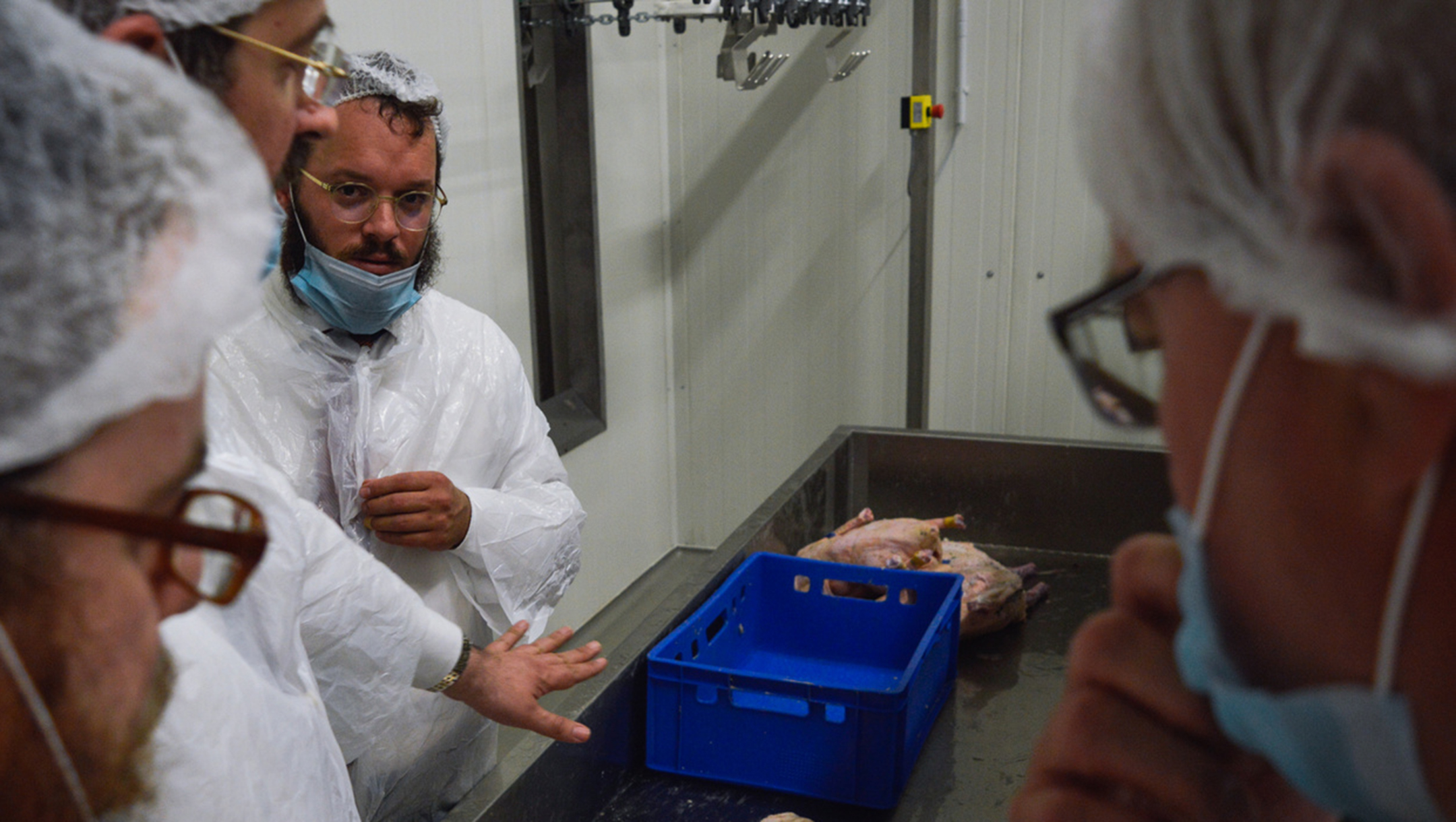 The slaughterhouse has since returned to its speciality: killing, preparing and dismembering geese that had been force fed to make their livers large for the production of foie gras.

At Kosher Poultry, dozens of workers, most of them from countryside Roma communities, work in a state-of-the-art factory, which was designed around two principles: strict observance of kosher laws and minimum waste. Hundreds of thousands of birds are slaughtered there annually.

The birds are loaded in cages directly from the farmer’s truck to the slaughter area, where four schochets, Jews with training in the production of kosher meat, use very sharp knives to cut through each bird’s windpipe and main artery.

The technique — prescribed under ancient Jewish laws — runs afoul of the bans in several countries on slaughter done without the animal first being stunned. Animal rights advocates say slaughter without stunning is inhumane, while experts in kosher laws say it’s possible to minimize trauma to animals without violating ritual law.

But especially with geese, “doing it fast enough takes skill and practice,” he said. “The geese have tough cartilage rings in their windpipes and you need to hit between those rings or you will not make the cut in one motion — and dull the knife for the next one,” he said while stretching open the incision on a dying goose to inspect the incision and show it to a reporter.

Injuries other than the one that caused death render animals unkosher, so as the geese are processed, their parts are examined closely. If any defects are discovered, the meat is transferred to a separate, non-kosher production line for use in the general market.

In both production lines, the liver is extracted, cleaned, weighed and packed raw or cooked for freezing and delivery. Each liver weighs about 28 ounces and is worth about $100 in France, where the only kosher foie gras sold is Hungarian.

Animal welfare groups in Hungary have noticed the growth in the country’s kosher meat industry, and they’re not happy about it.

“Kosher slaughter is extra cruel not only because it offers no anesthesia from the pain of having the animal’s necks cut, but also because fully-conscious the animals see their families being slaughtered. They know what’s coming,” said Richard Kapin, a founder of the Hungarian animal welfare group Soccer Fans for the Animals. Kapin, who was born in Budapest, is not Jewish.

His organization and others are lobbying aggressively to get Hungary to ban both kosher slaughter and the force feeding of geese, which has been banned in Israel, the United Kingdom, Finland and Poland, among other places. Many animal welfare activists say both practices are cruel.

“I am very happy that Belgium banned kosher slaughter,” Kapin said. “I hope it happens here too.”

Werchow disputed this, saying that the force feeding nowadays is painless because the food is transferred to the geeses’ stomachs using flexible silicone sleeves that cause much less discomfort and injuries than the metal ones they replaced in recent years.

“As for the cut — it is its own anesthesia. It’s too swift and sharp to cause pain and the animal is made unconscious by the drop in blood pressure. They’re out before they actually die,” he said.

But to Kapin, both the slaughter and the force feeding are “extremely cruel,” he said. The group headed by Kapin, 36, has 100,000 followers on Facebook — a significant number in a country of only 9.5 million residents.

In other European countries, animal-rights activists pursuing causes similar to those sought by Kapin have become strange bedfellows with right-wing politicians in their efforts to bar slaughter without stunning. Geert Wilders, the Dutch anti-Islam politician and the Vlaams Belang party in Belgium are among the right-wing leaders that have promoted bans on kosher and halal slaughter, in keeping with their goal of limiting what they call “Islamization,” or the influence of Muslim immigrants.

Orban shares those parties’ critical view of the EU and has used similar language to theirs about Muslims, calling immigrants from the Middle East “Muslim invaders.” He is particularly at odds with George Soros, the Hungarian-born philanthropist who opposes Orban and funds liberal causes in Hungary and around the world — including the E.U. (Mazsihisz, Hungary’s largest Jewish organization, has accused Orban of emboldening antisemitism with billboards criticizing Soros; EMIH, the Chabad-affiliated rival group, has defended the government.)

Orban’s disagreements with the EU are one reason the Orban government is likely to withstand public pressure on slaughter without stunning, according to Kalman Szalai, the secretary-general of Hungary’s Foundation for Action and Defense, a watchdog of the local Jewish community. 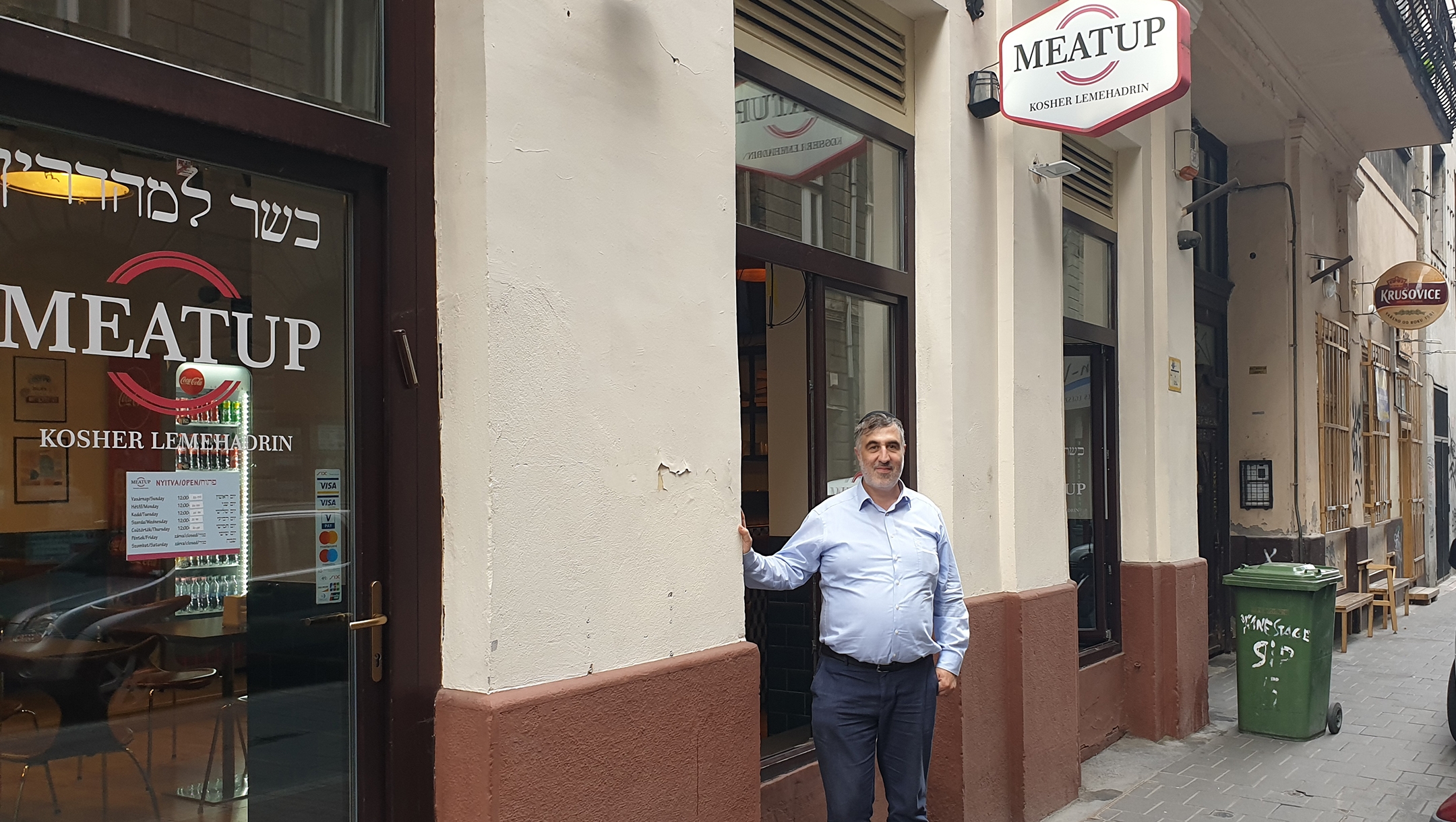 Szalai said he believes that Orban cares about Hungarian Jews and freedom of worship. But he noted that inviting kosher slaughterhouses to Hungary “makes sense politically, because it shows up the EU as intolerant, and it’s financially beneficial, providing jobs. So that’s a double win.”

Koves, the Budapest rabbi, said he didn’t think Orban was politicizing kosher slaughter in his fight with the EU. But, he added, “the issue does show the hypocrisy of a body that accuses Hungary of human rights violations even as they commit them against Jewish communities and Muslim ones.”

Any further debate about kosher slaughter or the production of foie gras in Hungary would run up against a matter of national identity.

“Foie gras is a lucrative local tradition,” Szalai said. “Banning it or its kosher component would also raise an outcry.”

“But it’s not just the government, Hungarian society itself is traditional,” ‪László Györfi, the owner of a kosher eatery, Kosher MeatUp, told JTA. “This has disadvantages and advantages — but it means that these kinds of bans are not on the menu here for the moment.”