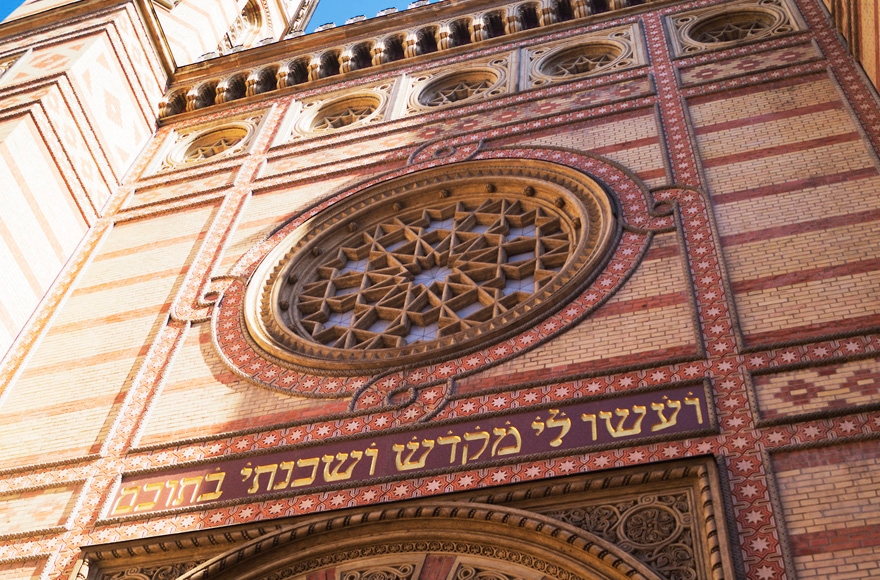 Hungary’s Dohány Street Synagogue, also known as the Great Synagogue, is the largest synagogue in Europe and the second largest in the world. (Charles Dunst/JTA)

(JTA) — Two-thirds of Hungarian Jews believe anti-Semitism is a serious problem in their country, according to a new survey, though fewer than half say they have experienced it firsthand.

The survey, which the prominent sociologists András Kovács and Ildikó Barna conducted in 2017 through face-to-face interviews with 1,879 Jewish adults, was published Thursday at a news conference in Budapest. It is a follow-up to a 1999 survey of Hungarian Jews that asked about perceptions on a range of topics.

On anti-Semitism, 48 percent of the respondents said they heard anti-Semitic rhetoric on the street in the year preceding the survey, down from 75 percent in 1999. The number of respondents who said they had experienced at least three instances of anti-Semitism was 6 percent, compared to 16 in 1999.

However, asked to quantify the extent of anti-Semitism in Hungary, 55 percent of the respondents said it was “great” and another 10 percent said it was “very great.”

“In 2017, the situation was perceived as much worse than it had been perceived in 1999,” the authors of the survey wrote.

In its annual report for 2017, the Jewish community’s watchdog on anti-Semitism, TEV, said it recorded 37 anti-Semitic incidents, compared to 48 in 2016, constituting a 23 percent decrease. Most of the incidents recorded last year and in 2016 featured hate speech. The rest were cases of vandalism.

In terms of demographics, the survey authors said that Hungarian Jewry’s numbers are somewhere between 70,000 and 110,000. The community is losing about 2,000 members every five years, it said.

The proportion of mixed marriages has started to rise again following a drop and stands at 62 percent among respondents aged 18-34. It had fallen to half of respondents aged 35-44. In the 45-54 age, 66 percent are intermarried.

The survey was done in partnership with the Szombat Jewish paper and TEV.

Hungary’s government is facing criticism for its billboard campaign and propaganda against George Soros, a Jewish billionaire and Holocaust survivor who funds liberal causes and organizations and supports the settling of hundreds of thousands of Middle East immigrants. Some Hungarian Jews say it encourages anti-Semitism, but others dispute the claim.

This week, TEV announced it was forming a partnership with counterparts in Poland, Slovakia and the Czech Republic to begin joint monitoring.