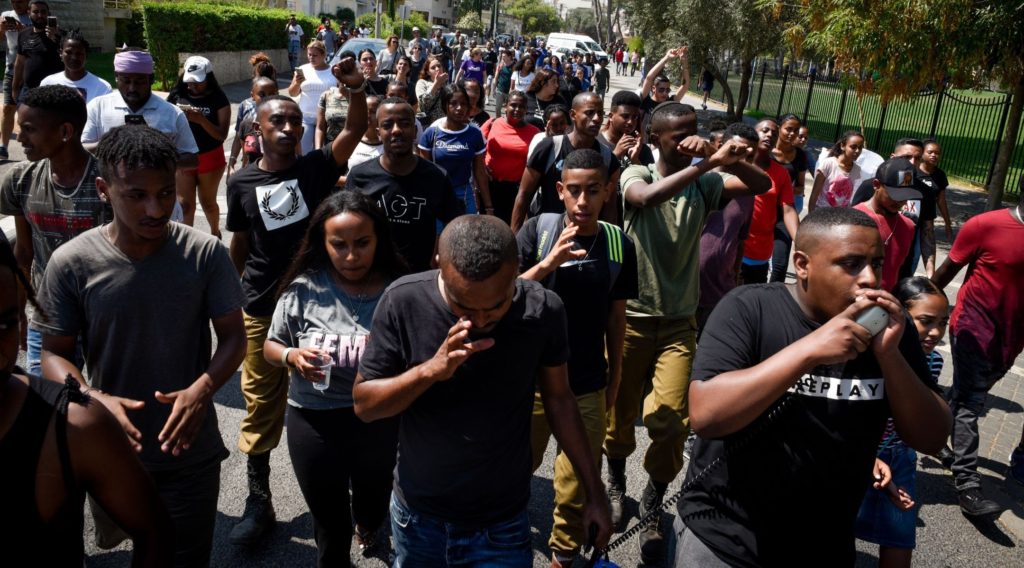 JERUSALEM (JTA) — Hundreds attended the funeral of an Ethiopian-Israeli teen who was shot and killed by an off-duty police officer who said he felt his life was threatened.

Solomon Tekah, 19, was killed Sunday night in Kiryat Haim, in northern Israel. Eyewitnesses to the incident told the police and Israeli media that the officer, who is under house arrest and whose name is under a gag order, was not in danger when he shot Tekah, according to reports.

“We are asking for justice,” Tekah’s father, Worka, said in his eulogy Tuesday afternoon. “My son has already gone, but I hope he will be the last victim.

“Do not cry for my son. We demand that the murderer get what he deserves and find justice. Help me in this struggle. I want to be the last parent to bury their child.”

Hundreds of protesters burned tires and blocked major roads in the Haifa area on Monday afternoon and evening. There were other protests throughout the country.

More demonstrations were scheduled for Tuesday afternoon, with a mass demonstration called for 5 p.m. in Tel Aviv and elsewhere.

Police have opened an investigation into Tekah’s death.

The officer, who was walking to a local park with his wife and three children, told investigators that he approached the teens involved in the street brawl and made it clear that he was a police officer. The teens then began throwing stones at him. He said that he felt his life was threatened and aimed at the ground when he fired his service revolver.

It is believed that the bullet ricocheted off the ground and struck Tekah in the chest, though an autopsy was inconclusive due to the first aid efforts to save the teen, Haaretz reported.

Police have been accused of racism and brutality against Ethiopian Israelis. In January, thousands of demonstrators protested in Tel Aviv following an incident in which police shot and killed Yehuda Biadga, 24, a mentally ill Ethiopian-Israeli man who police say charged an officer while brandishing a knife. Several protesters clashed with police at the end of the demonstration.

A 2015 demonstration at Rabin Square in Tel Aviv ended violently as police attempted to quell rioting by thousands of demonstrators.