How Venezuela’s remaining Jews are hanging on amid the crisis

(JTA) — One night years ago, when a Jewish man was driving to his parents’ house in Caracas, Venezuela, two cars blocked off the street he was on and held him up at gunpoint.

He got into their car and began answering questions: who he was, where he lived, how much money he could give them for his release. After three hours of this interrogation, the kidnappers drove to his house, got $10,000 from his wife through the front door, and let him go. Although he was wearing a kippah, he doesn’t recall the kidnappers being anti-Semitic.

Such “express kidnappings,” where victims are held for quick ransoms for a few hours, used to be an occasional hazard for affluent residents of Caracas, the capital. But not anymore, the Jewish man said.

“Kidnapping in Venezuela, the business is not so good because there is not cash in the street,” said the man, who is involved in the Jewish community but wished to remain anonymous because he feared repercussions amid the current unrest in Venezuela. “It was a way to make money fast.”

Kidnapping is one of many facets of Venezuelan society that has collapsed over the past few years, as a once-wealthy country has descended into destitution, authoritarianism and chaos. This week has seen the president of the National Assembly, Juan Guaido, call for the military to endorse his movement to replace the country’s current strongman president, Nicolas Maduro. So far, and despite widespread unrest, the move appears to be fizzling.

The United States, Israel and a range of other countries have recognized Guaido as the country’s legitimate president.

The crisis has also furthered the depletion of Venezuela’s Jewish community. From a height of 25,000 members in the 1990s, it’s down to about 6,000 now and shrinking, the rest having fled to the U.S., Israel or elsewhere. Most who remain live in Caracas. Those who have held on are depending on each other to survive in an increasingly dire situation.

Widespread crime means people don’t eat out anymore, so people frequently host weeknight dinners at their homes, according to people with knowledge of their situation. Inflation has gone crazy, so people pay for everything — and get paid — in U.S. dollars.

“You have the community, you know everyone,” he said. “You have weather that is marvelous, wonderful. You have doctors and institutions that you know.” 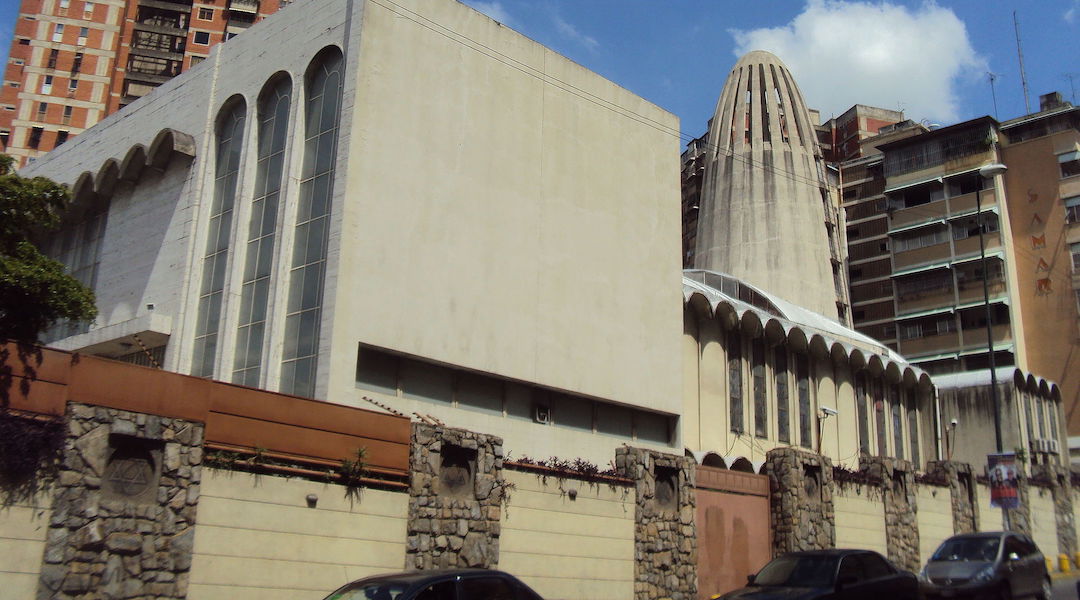 The Tiféret Israel Synagogue in Caracas was attacked in 2009. (Wikimedia Commons)

But staying is still the exception to the rule. People — Jewish and not — have left less because of the possible coup, Venezuelan Jews say, and more because of economic instability.

“There’s no prospect of being a professional in Venezuela,” said Sammy Eppel, 71, a Jewish journalist and businessman who emigrated to Miami three and a half years ago. “You don’t have a path to prosperity anymore. I think Jews in Venezuela are in the same boat as everyone else in Venezuela. We haven’t been particularly targeted.”

But political persecution does sometimes play a role. Eppel’s writing in El Universal, a major Venezuelan newspaper, often criticized Venezuela’s socialist governments. He also owned a call center with clients such as Microsoft and Motorola, and more than a decade ago, the government shut off his phone lines, forcing him to close. After that, he said that groups of people would show up at his apartment building posing as tax collectors, ask his doorman to call him down and then disappear.

When the men threatened the doorman with a gun, he decided it was time to leave the country.

“In the eyes of the regime I was an enemy,” he said, recalling that the men approached his doorman and “pulled a gun on him and pointed a gun at this head and said ‘Don’t lie to us. We know he’s in there.’”

The government has also long been staunchly anti-Israel. Maduro, and his predecessor Hugo Chavez, made nice with Israeli adversaries like Iran. Israel and Venezuela do not have diplomatic relations. And in 2004 and 2007, government forces raided, respectively, a Jewish school and Jewish community center.

“When Chavez severed relations with Israel, it sent a message to a lot of Jews that they were not welcome there,” said Dina Siegel Vann, director of the American Jewish Committee’s Belfer Institute for Latino and Latin American Affairs. “I think many of them stayed because they thought things would get better.”

Things have not gotten better. But something that isn’t present, she said, is anti-Semitism. Times of crisis, in other places, have proved fertile grounds for the spread of Jew-hatred. But Siegel Vann said that most significant anti-Semitism in Venezuela has come from the government, not the grassroots. Now that the government is in disarray, anti-Semitism has faded.

“Venezuelans are not anti-Semitic,” she said. “In Europe, you have historical baggage. In Venezuela, you don’t have that. It was promoted from the top.”

As the Jewish community copes with the crisis, the anonymous community member said, its official representatives have been careful not to take sides. It remains in contact with Maduro, who still holds power, and criticizes his anti-Israel stances.

But he, too, wants to emigrate to Israel. When will he leave?

“As soon as Maduro kicks me out,” he laughs.