How the Pittsburgh synagogue shooting unfolded 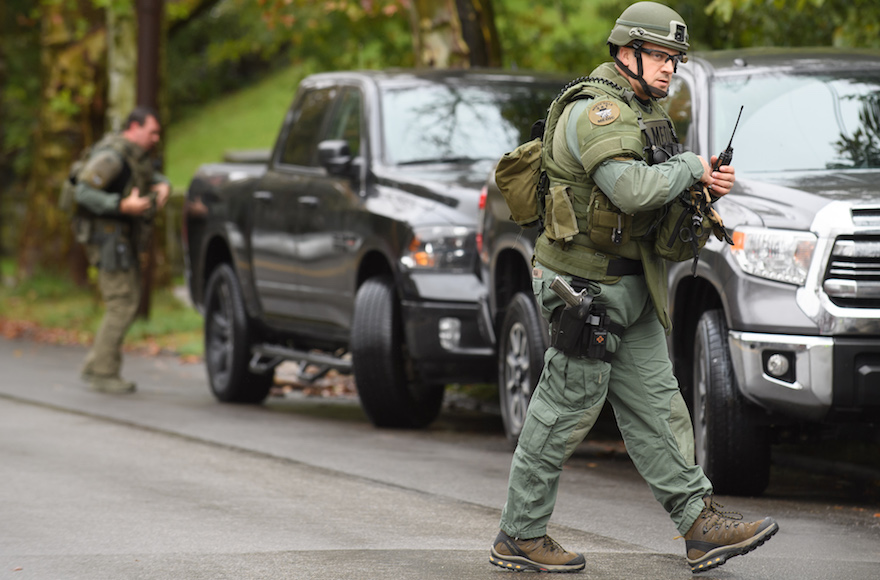 Police respond to the mass shooting at the Tree of Life synagogue in the Squirrel Hill neighborhood of Pittsburgh, Oct. 27, 2018. (Jeff Swensen/Getty Images)

(JTA) — On Saturday, a gunman entered the Tree of Life Congregation in Pittsburgh and killed 11 people, wounding six others. It was the worst recorded anti-Semitic act in American history.

Here’s how the tragedy happened. (This account has been reconstructed from JTA’s reporting, The Pittsburgh Post-Gazette, The New York Times and the “Today” show. Some of the times are approximate.)

Robert Bowers, the alleged gunman, is a truck driver from the Pittsburgh area who lives in a one-bedroom apartment about a half-hour’s drive from Squirrel Hill, the diverse neighborhood that has long been the center of the city’s Jewish community. Acquaintances described him to The Times as a loner, “pretty much a ghost” with few people close to him. His next-door neighbor would see him occasionally but had forgotten his name.

But that quiet exterior obscured Bowers’ hateful beliefs, which he expressed on Gab, a social media platform for the far right. Bowers would post bigoted and anti-Semitic comments. Shortly before the shooting he vilified HIAS, the Jewish refugee aid group, for its work resettling Middle Eastern refugees in the United States.

“HIAS likes to bring invaders in that kill our people,” he wrote on his website. “I can’t sit by and watch my people get slaughtered. Screw your optics, I’m going in.”

At the entrance, Cecil and David Rosenthal, brothers who are active members of Tree of Life, are handing out prayer books. There is a table with challah, wine and whiskey for a bris, or circumcision ceremony, being held that morning. In the kitchen, two other community members, Daniel Stein and Richard Gottfried, are preparing lox, cream cheese, bagels and eggs.

The gunman enters and begins shooting. His first victims, according to a Times account, are the Rosenthal brothers, ages 54 and 59. He then enters New Light, where Melvin Wax, 88, is leading services.

The first call is placed to 911, apparently by Rabbi Jeffrey Myers of Tree of Life. Barry Werber, of New Light, also calls 911 around this time.

Myers told “Today” that when he first heard the gunshots, he assumed it was an elderly person who had grabbed onto a coat rack for balance and knocked it over. Seconds afterward, after a second round of volleys, Myers realizes he’s hearing gunfire.

After hearing the gunshots, several congregants of New Light — Werber, Wax, Rabbi Jonathan Pearlman and Carol Black — hide in a storage closet. They are unable to find the light switch, leaving the room pitch black.

The shooting subsides, and Wax opens the door. He is shot and killed.

The gunman then enters the storage closet and begins to fumble around in the dark, with the three other congregants still inside. Unable to see them, he leaves.

The gunman goes upstairs to the Tree of Life congregation, where a number of congregants remain, and begins shooting. Seven are killed, one injured.

“I couldn’t save those eight people,” Myers told Today. “I went up into the choir loft and heard him execute my congregants.”

Two others, including Daniel Leger, 70, are injured.

The first police officers arrive on the scene and begin to engage the gunman. He returns fire from the front of the building.

The shooter then retreats into the building and barricades himself on the third floor.

The SWAT team arrives. Police have set up a perimeter around the building.

The SWAT team encounters the gunman on the third floor and begins exchanging fire with him. One officer is critically wounded.

The gunman begins talking to the officers. He identifies himself as Robert Bowers, age 46, from Baldwin Borough.