How the Pittsburgh shooting is affecting next week’s elections 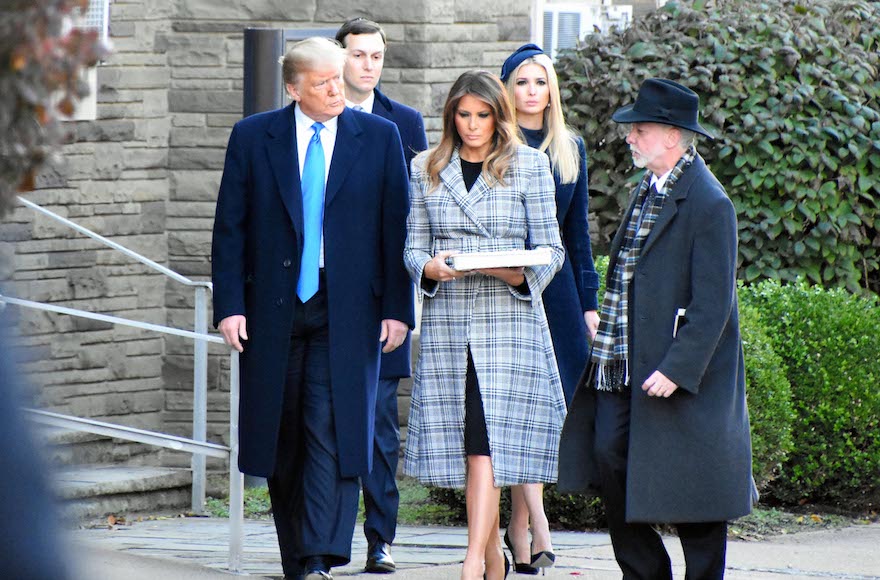 President Donald Trump and first lady Melania Trump visit Pittsburgh with Ivanka Trump and Jared Kushner three days after the shooting at the Tree of Life Synagogue there, Oct. 30, 2018. (The Asahi Shimbun via Getty Images)

WASHINGTON (JTA) — The worst attack on Jews in U.S. history will have long-term consequences, likely affecting Jewish life and worship for years.

Short term, it might also have historical significance: Saturday’s murder of 11 worshippers in a Pittsburgh synagogue by a gunman who reportedly swore to kill every Jew has inevitably become an election issue just a week before the midterms.

No less than President Donald Trump understood the significance.

“Yesterday in Pittsburgh, I was really impressed with Congressman Keith Rothfus (far more so than any other local political figure),” Trump said on Twitter, referring to his condolence visit Tuesday. “His sincere level of compassion, grief and sorrow for the events that took place was, in its own way, very inspiring. Vote for Keith!”

The stakes are high: Trump’s Republican Party is predicted to lose the U.S. House of Representatives, which will hand Democrats subpoena power, raising the prospect of a season of scandal and possibly impeachment. Democrats also have a longer shot at gaining the Senate. Should that happen, Trump’s presidency will effectively have ended two years early.

Thirty-six states also are electing governors, and some of the more competitive races — Georgia and Florida in particular — will likely be critical to organizing turnout in the 2020 presidential election.

Rothfus is likely to lose to Rep. Conor Lamb, a Democrat, in a post-redistricting race that pits two incumbents against one another. The race is a personal one for the president: Trump campaigned earlier this year to defeat Lamb, who was running in a special election in what was then a solid Republican district. Lamb won anyway, propelled in part by disappointment with the president in a state he won handily in 2016.

Last week’s synagogue massacre was allegedly carried out by a man who reviled Trump, but who shared his fears of a convoy of Central American migrants headed for the U.S. border. Before that another man in Florida, enamored of Trump, allegedly sent at least 15 pipe bombs to leading liberals, Democrats and media.

Trump’s approval ratings, climbing because of a robust economy, dropped last week, Gallup reported, from 44 to 40 points — an “unusually steep” decline, Bloomberg News said. And it may be worse: The poll of 1,500 people is conducted Monday through Sunday of the previous week, so a number of respondents would not have brought into their calculus the Pittsburgh shooting, which took place on Saturday, or the pipe bombs, which dominated the headlines only in the latter part of the week.

Trump’s approval similarly plummeted in August 2017 after he equivocated in condemning a neo-Nazi march in Charlottesville, Virginia, that ended in deadly violence. Pennsylvania’s Republican senator, Pat Toomey, declined an invitation to join Trump on his condolence visit to Pittsburgh.

The optics of that visit, in which the media showed crowds of protesters objecting to what Trump planned as a healing moment before the final push to the midterms, clearly perturbed the president.

“Melania and I were treated very nicely yesterday in Pittsburgh,” he tweeted. “The Office of the President was shown great respect on a very sad & solemn day. We were treated so warmly. Small protest was not seen by us, staged far away. The Fake News stories were just the opposite-Disgraceful!”

The top Democratic Party leadership thus far has avoided using the Pittsburgh shooting against Trump, but grassroots groups have not been so reluctant. In the Jewish community, the liberal groups Bend the Arc and J Street have cited Pittsburgh in issuing calls to followers to turn out Tuesday to vote.

“It’s clear that this kind of anti-immigrant, anti-Semitic thought has been spread not only by far-right groups, but by President Trump and some of his allies in the Republican party,” J Street said in an email with the subject line “Activate Against Hate. “In the lead up to next week’s pivotal midterm elections, we have seen a transparent effort by Trump and some Republican candidates to turn bigotry and fear into a political weapon.”

“Our houses of worship will never truly be safe until those in power challenge anti-Semitism and the rampant proliferation of guns,” she said.

Notably, some of the Democratic nominees who have been most outspoken about linking Trump and Republicans to the violence have been those criticized by Republicans for insufficient support for Israel.

“These deranged people have always been with us. What has changed is the political climate,” Tom Malinowski, who hopes to unseat incumbent Republican Leonard Lance in New Jersey’s 7th District, said in a statement. “Our highest national leaders are legitimizing rhetoric once confined to the paranoid extremes of our society – railing against ‘globalists,’ who all happen to be prominent Jews, complaining about ‘white genocide,’ attacking immigrants for ‘threatening our culture,’ and spreading crackpot conspiracy theories to advocate imprisoning their political opponents.”

Jewish Republicans have targeted Malinowski because of his past employment with Human Rights Watch, a group that is critical of Israel.

“Six days from now, we can defeat the brutal white supremacist forces of anti-Semitism, anti-immigrant nativism, and racism,” said Ocasio-Cortez, who has been criticized for accusing Israel of a “massacre” earlier this year along the Gaza border. “We can send a message to the bigots and billionaires that this country belongs to all of us. We can win if we show up on November 6. We must end Republican control of Congress and begin to reclaim our nation.”

King has been controversial for years because of his associations with far-right groups, including anti-Semites. Stivers’ comment effectively meant that the NRCC, the fundraising arm of the House leadership, was cutting off King, who is cash-starved and facing a tough re-election bid in a district that has gone for him by wide margins in the past.

In an appearance Wednesday on CNN, an anchorwoman pressed Matt Gorman, Stivers’ spokesman, about the timing.

“We need to return to civility on both sides,” he said.

The post How the Pittsburgh shooting is affecting next week’s elections appeared first on Jewish Telegraphic Agency.